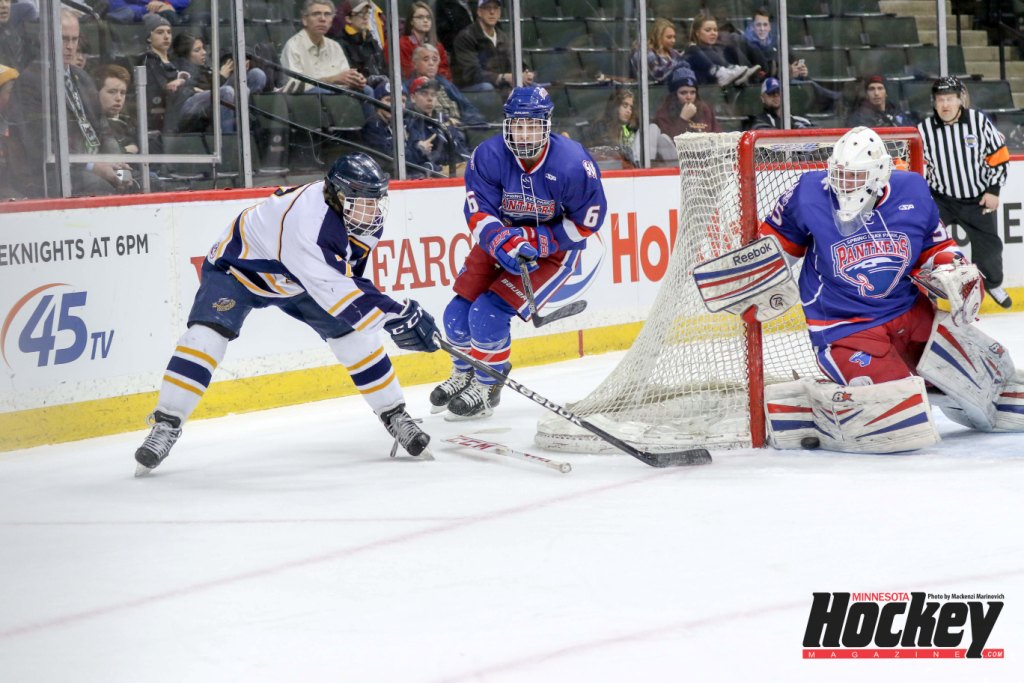 Hermantown’s Ryan Kero was denied here but scored three times in the Hawks’ 8-0 win over Spring Lake Park in the Class 1A quarterfinals on Wednesday night at the Xcel Energy Center. (MHM Photo / Mackenzi Marinovich)

St. Paul — It was a night the helmet could only be shared.

The protective headgear bestowed upon Hermantown’s player of the game was placed on a table between Hermantown’s Nate Pionk and Ryan Kero as the two sat down to face the media after the Hawks’ 8-0 Class 1A state tournament quarterfinal win over Spring Lake Park on Wednesday night at Xcel Energy Center.

“Today it got passed to me but I said, ‘No, Ryan and I should share this one,’” Pionk said of the pink and white Minnie Mouse bicycle helmet the team found in a St. Cloud locker room

The tandem of Pionk and Kero each scored three times and added a trio of assists for the Hawks (26-2-1) as top-ranked and top-seeded Hermantown advanced to their sixth consecutive Class 1A state tournament semifinal. Hermantown will face the winner of Wednesday’s late game between Breck and St. Cloud Apollo on Friday afternoon.

Spring Lake Park played one of the tougher schedules in Class 1A this season and Panthers’coach Tom Benson says Hermantown is as good as any his team has faced.

“They’re right there in the same discussion with Elk River, Blaine, Centennial, Maple Grove,” Benson said. “Their front end is very skilled and every player on their team competes hard; they’re a good team, no question, they’re solid.”

The Hawks built a three-goal lead after one period and cruised from there, giving the Panthers little room to operate in outshooting Spring Lake Park 50-10 for the game.

“Their defense was phenomenal,” Panthers’ senior forward Jake Newsom said. “They shut us down from everything, the blocked shots, took the body, they made us go wide and they just didn’t let any shots to the net.”

The remarkable chemistry between Pionk and Kero was immediately evident as Hermantown seized control early on Kero’s 30th of the season on a feed from Pionk. On a play that essentially developed into a 4-on-1, Kero buried a pass from Pionk just 3:15 into the opening period.

“They’re very special players,” Hermantown coach Bruce Plante said. “We’ve had some other pretty good players, too, that had great chemistry but these guys have been great all year.”

Seven minutes later Pionk pounced on a loose puck in the slot to double the Hermantown lead and later fired into a wide open net after Kero’s shot ricocheted of the inside of Panther’s goalie Aaron Furlano’s right leg and through the crease.

That’s the first [state tournament] game that I can remember that we played our first period not tentative or tense,” Plante said. “We came out and played loose right away and that’s a credit to the captains here and the way they react to each other in the locker room.”

Wyatt Aamodt and Kero extended Hermantown’s lead to five after two periods and Ryan Sandelin made it 6-0 early in the third to initiate running time the rest of the way.

Hermantown used its speed and skill to wear down the Panthers, who were making their state tournament debut, and the Hawks took full advantage of their edge in experience.

Benson said he didn’t want to take anything away from his players, but he thought the Panthers were prepared and ready to play on Wednesday. But he added the game’s environment, and his team’s lack of experience in it, was certainly a factor in Hermantown’s victory margin.

“It was kind of a real difficult, I don’t want to say stage to play on, but it was challenging for our kids, no question,” Benson said. “I know they were nervous but I thought we played OK.”

Pionk completed his hat trick with 1:32 to play to make it 7-0 but made good on a promise he immediately made to Kero and set him up for his third goal with 45 seconds left.

“He said he’d get me one after, so it kind of worked out that way,” Kero said.