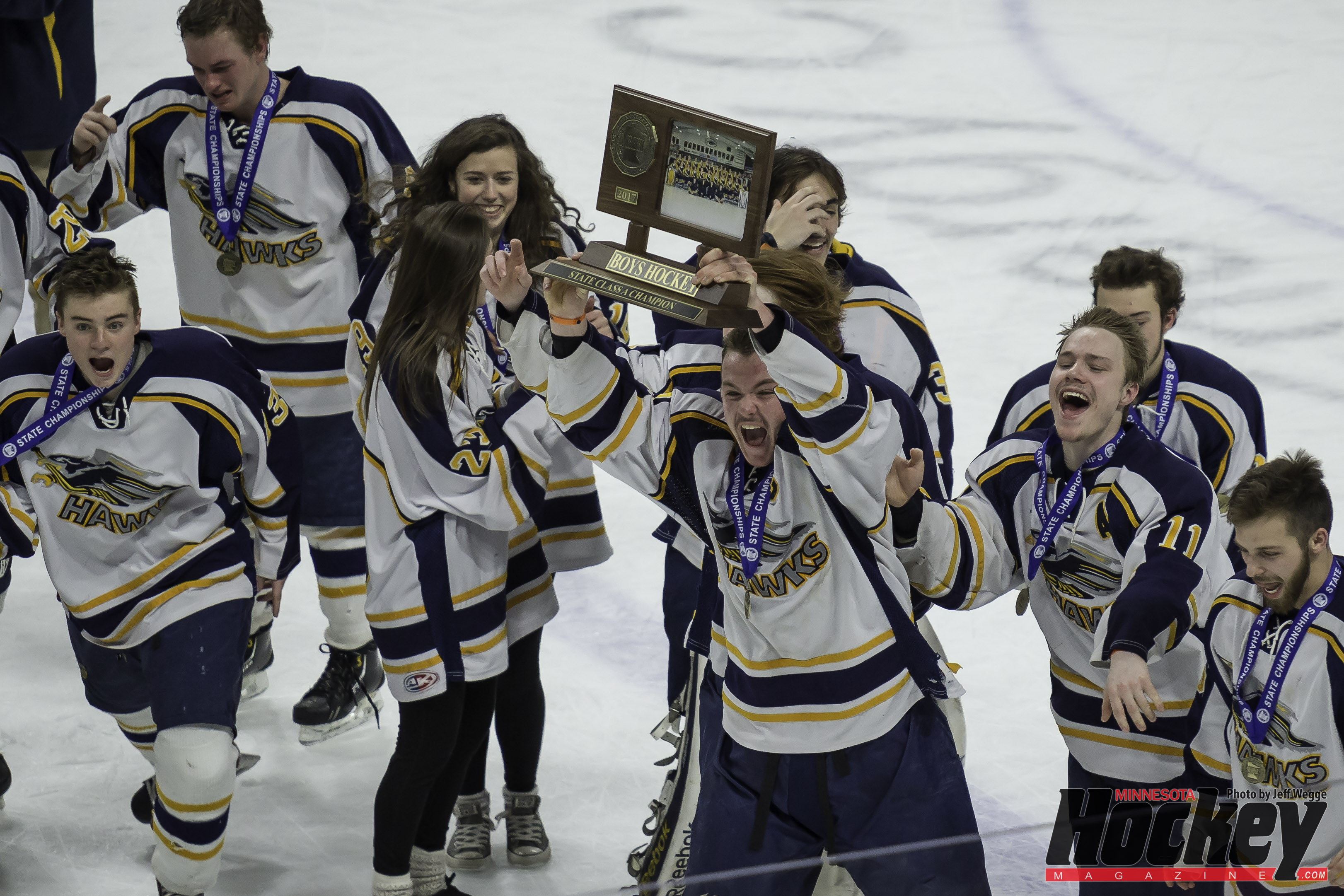 Winning a state championship is so nice, Hermantown did it twice on Saturday.

Dylan Samberg’s goal with 19.4 seconds remaining in the second overtime lifted the No. 1-seeded Hawks to a 4-3 win over unseeded Monticell0/Annandale/Maple Lake in the Class 1A boys’ hockey state championship game.

“Doing it again was really a lot tougher than I had ever imagined,” Plante admitted. “It’s tough, it’s a lot of pressure on these kids.”

The Hawks appeared to win 5:26 earlier when Tyler Watkins scored what would have been his third of the game the game. Sticks, gloves and helmets went flying across the ice but the play was reviewed and it was the Moose celebrating after it was ruled Ryan Sandelin had interfered with MAML goaltender Tyler Klatt who finished with 54 saves.

“The kids have great character and determination and they just sucked it up and came back at it,” Plante said. “Nobody on our team folded, not one guy. in fact, some of them played better at the end.”

“I wouldn’t have forgiven myself if we didn’t win this game,” Sandelin said. 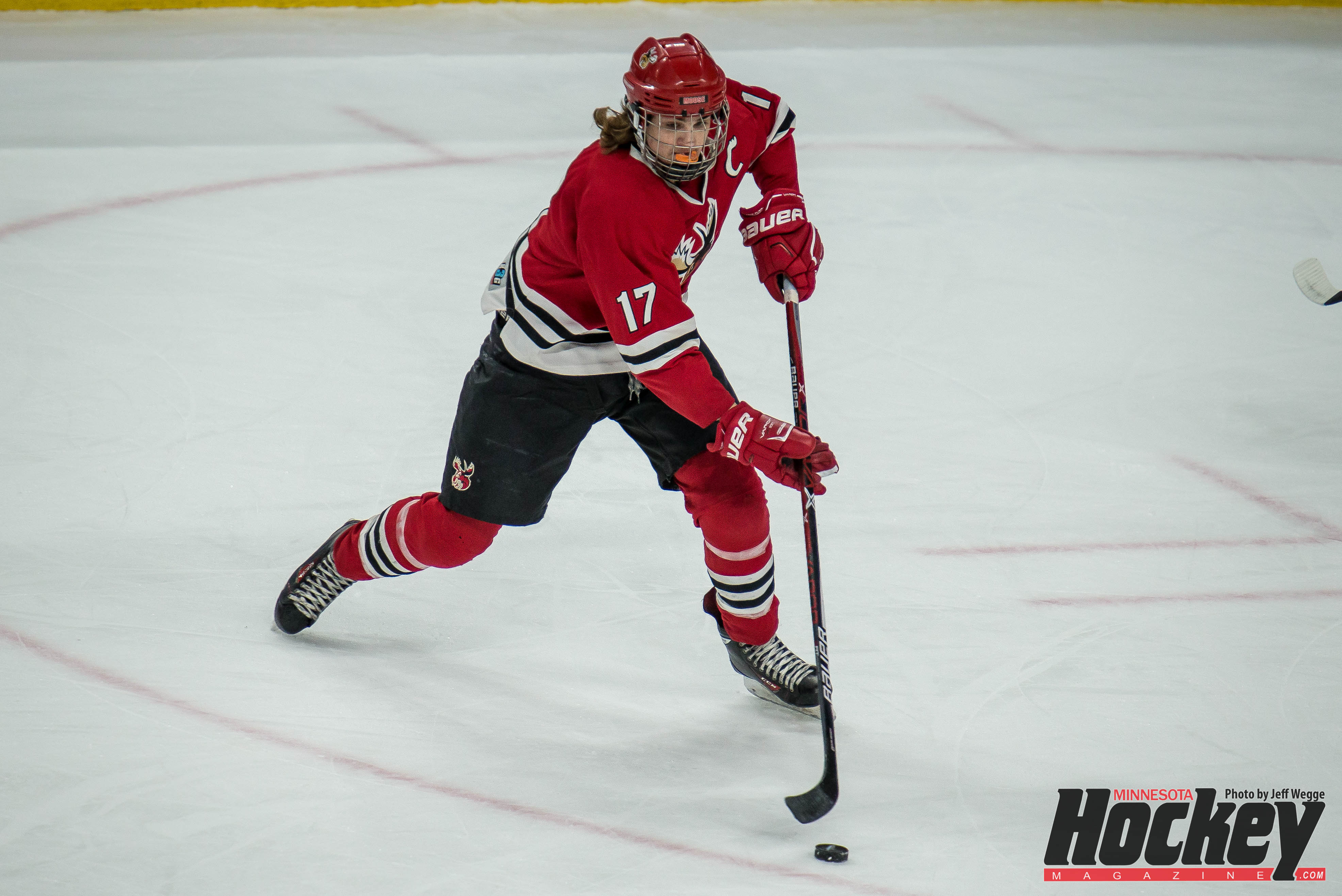 Monticello/Annandale/Maple Lake’s Nick Zwack’s 31st goal of the season 26 seconds into the third period of the Class 1A state championship game gave the Moose surprising a 3-1 lead over Hermantown and its massive traveling fan base a lot of hope.

But as had been proven previously in the tournament, no lead is safe where the Hawks are concerned and third-period goals by Jess Jacques and Tyler Watkins, his second of the game, 2:09 apart sent the game to overtime.

After outscoring its opponents by a combined score of 23-4 en route to the 2016 Class 1A title, Hermantown took a much tougher route to the 2017 championship game, needing overtime for 3-2 and 6-5 wins over Luverne and St. Cloud Cathedral, respectively.

The defending champions came from behind in both games and dug themselves yet another hole against Monticello/Annandale/Maple Lake (23-7-1). But the resilient Hawks pulled themselves out one last time to claim their second Class 1A championship in two years.

“This year we had t0 scratch and claw for everything we got,” Sandelin said. “That’s the biggest reward, I mean, the guys never gave up and I just couldn’t be more proud of this group.”

MAML made history on Saturday becoming not only the first unseeded team to play in a state championship game, but to win one, since the seeding system was implemented in 2007. Fourth-seeded Breck had been the lowest seed to reach the final in 2009 when it beat Breck 7-3.

“For us to come in as considered the seven seed and then to win two games and then come in and play as good as we did today, it’s still surreal to us,” Zwack said. “Obviously, we’re happy with how we’ve done, we just wanted to maybe make it one more game.”

“A lot of respect goes to them for the season they’ve had and how hard those kids played,” Plante said. “I love their jerseys. They’re the greatest jerseys on a high school team. A pissed off Moose, that’s right in our country up there.”

The Moose played a very physical game against Hermantown, something coach Eric Nelson said his team needed to do to slow down the speedy and skilled Hawks.

“For the most part, we weren’t necessarily an overly physical team all year,” Nelson said. “I thought today we kind of stepped it up another notch to, hopefully, suck a little energy out of them.” 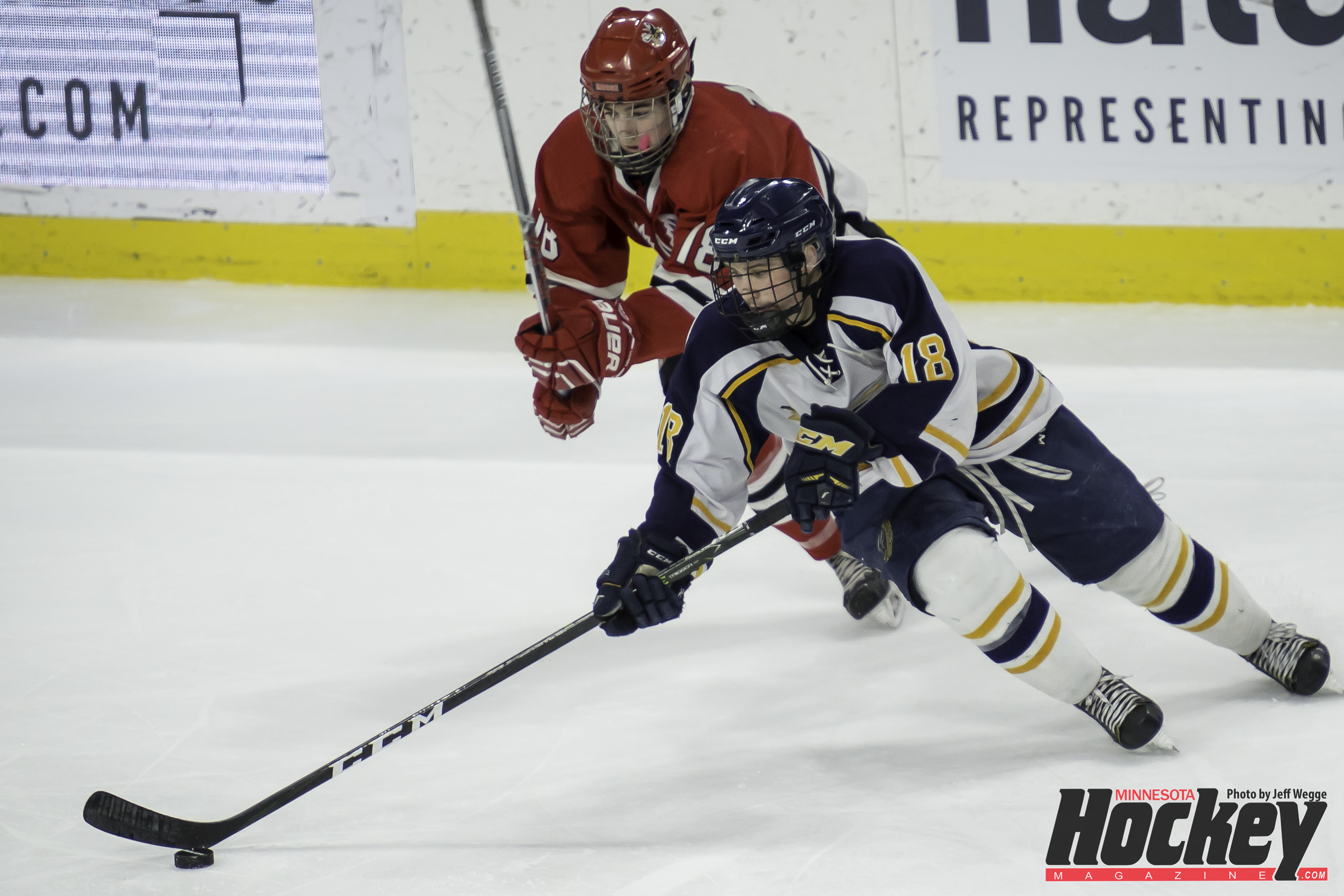 “Hats off to them, they did and incredible job and battled hard all game,” Watkins said. “They were physical for sure, right off the bat.”

The game was scoreless after one period despite the Hawks holding a commanding 15-1 shots advantage heading into the break. But the 6’1″ Klatt stood tall, denying Matt Valure’s point-blank shot just short of the six-minute mark before withstanding a flurry of Hermantown power-play chances shortly thereafter.

“The first period was a shooting gallery for them,” Nelson said. “Tyler Klatt stood on his head. Like I said before, you need a brick wall back there and he was a stalwart for us all weekend.”

The Moose stunned the Hawks to open the second period by taking  2-0 lead on goals by Casey Chiodo and Ben Ward 1:11 apart in the first two minutes. Watkins answered for Hermantown at 3:14 but Klatt made the lead stand up into the second intermission.

“The whole team was amazing this weekend,” Nelson said. “Little engines that could was the whole team, we just wanted energy and we wanted to have fun and work hard and let the chips fall where they may.”