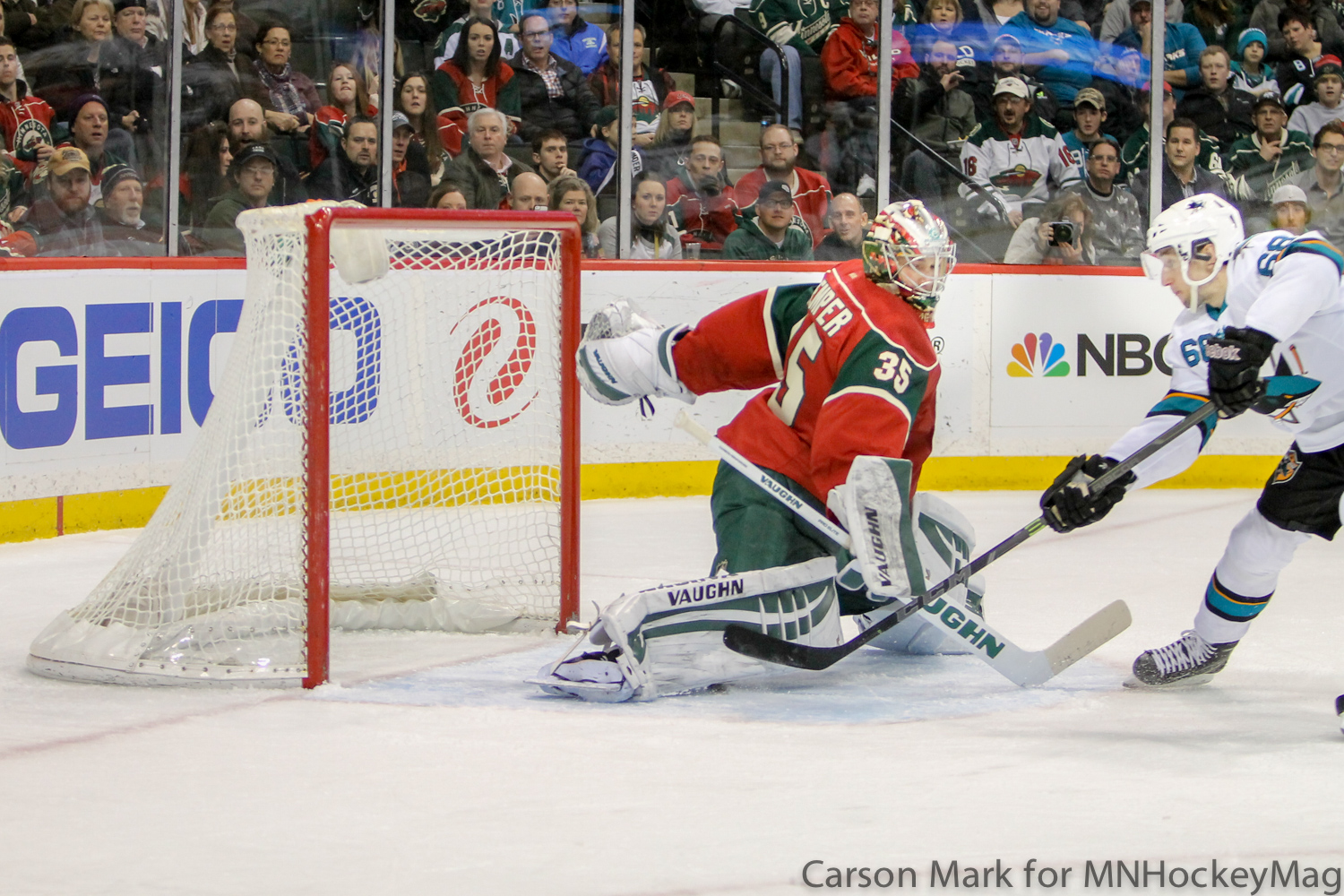 San Jose forward Melker Karlsson beats Wild goaltender Darcy Kuemper pull the Sharks within a goal in the second period on the way to a 4-3 win in overtime on Tuesday night at Xcel Energy Center in St. Paul. (MHM Photo / Carson Mark)

SAINT PAUL — J.P. Parise was a Minnesota hockey icon before anyone ever heard of sons Zach or Jordan.

J.P.’s late-stage battle with cancer forced Zach to skip the Wild’s 4-3 overtime home loss to the San Jose Sharks Tuesday night, and everyone with the Wild concurred with Zach’s decision.

Ryan Suter, the Wild defenseman who lost his father, Bob, to a heart attack at age 57 in September, fielded a phone call from Parise before the game to hear that J.P. was fighting for his life and Zach needed to be there.

“Life is much bigger than hockey,” Suter said after Minnesota lost for the eighth time in its past 10 games and fourth time in overtime during that stretch. “He definitely made the right decision to be with his family.”

Jason Zucker, who arrived at the Xcel Energy Center before the game to discover that Parise’s No. 11 sweater was not hanging in front of his locker, filled the void on the Wild’s top line with two goals and an assist.

Zucker is now tied with Parise and Nino Niederreiter for the team lead in goals with 14.

In a season that is rapidly disintegrating for the Wild, they lost to the Sharks on home ice for the first time in the past eight meetings and dropped to 18-15-5 overall for 11th place in the 14-team Western Conference.

Wild coach Mike Yeo spun things as positive as possible, insisting he was pleased with the play of his guys most of the evening and denying that, besides goaltending, three or four other players might have been “below average.”

“We were good tonight,” he stated.

Earlier, however, Yeo said this team cannot afford to have any players “be below average,” then observed that it’s “tricky” to discuss whether goalie Darcy Kuemper has fallen into that category because of “the confidence factor.”

That said, he noted, a team’s success invariably starts and ends with goaltending.

And the Wild’s season continued spiraling out of control.

It didn’t help that center Mikael Granlund is sidelined by a wrist injury and defenseman Nate Prosser missed the game because of illness.

But Parise is this team’s on-ice and off-ice leader; his absence was staggering.

“Our concern is with him,” Yeo said. “I thought our guys banded together and we played hard for him. All I can say is all our thoughts and prayers are with him and his family right now.”

Jason Pominville commented how the mood in the dressing room before the game turned glum when Zach’s situation was made known.

“It’s just tough to see something like this happening to a teammate and a friend and a big part of this team,” Pominville said. “I think a lot of guys were a little down, thinking about what was going on, but at the same time it might have pulled us together a little bit and we were able to put in a good effort.

“But these are things you never want to see anyone have to deal with. It’s just really unfortunate and we were thinking about him quite a bit.”

Zucker said he feels for Parise.

The Parises, of course, are immensely close and the father was way more proud of his son’s accomplishments than of anything he did in the sport.

I knew J.P. a bit from his days with the North Stars when I was a young sportswriter with the Minneapolis Tribune, but I didn’t really get to know him until he was director of the sport at the hockey factory known as Shattuck-St. Mary’s in Faribault, Minn.

I remember visiting Faribault for a Twin Cities daily newspaper to write about this freshman stud at the University of North Dakota by the name of Zach Parise who had returned to Shattuck to work out while the Fighting Sioux were on Christmas break.

J.P. made me feel at home, giving me a guided tour of the gorgeous campus and noting that there was another pretty good player currently playing there by the name of Sidney Crosby.

Zach, like his father, sat down for a lengthy interview and was gracious and humble.

His aim, he said — provided the teams overlooked his less-than-huge stature — was to make it to the National Hockey League.

Despite his 5-foot-11 height — he’s two inches taller than his father — there was never a doubt about that.

Like his dad, Zach brought nearly unmatched intensity and work ethic to pro hockey. And, also like his father, he has remained gracious and humble through an outstanding NHL career.

J.P. was always quick to say that Zach had more talent, and when I ran into him and his wife, Donna, before a game at the X two seasons ago, J.P. was proudly carrying a sign he had gotten signed by his son that read “Zach Parise Avenue.”

Although no one named any streets after J.P. Parise the hockey player, he was such a popular player and person that more than a few parents named one of their children after him.

J.P. was born 73 years ago in Smooth Rock Falls, Ontario, but became a Minnesotan as an adult. He played 152 games for the Minneapolis Bruins in the early 1960s when the Bruins were one of Boston’s farm teams, then played seven-plus seasons with the North Stars, beginning as a rookie in 1967, before stints with the New York Islanders and the Cleveland Barons and concluding with a final season as the North Stars’ captain in 1978-79.

He exhibited heart and soul as a player and as a man, traits he passed on to his youngest son, Zach.

Sometime soon, Zach Parise will return to the Minnesota lineup, wearing the same No. 11 his father wore for the North Stars, and continue delivering the kind of tenacity and intensity he has become known for.

You can count on it; it is part of the Parise legacy.