Goals by Jacques, Koepke send Hermantown back to the title game 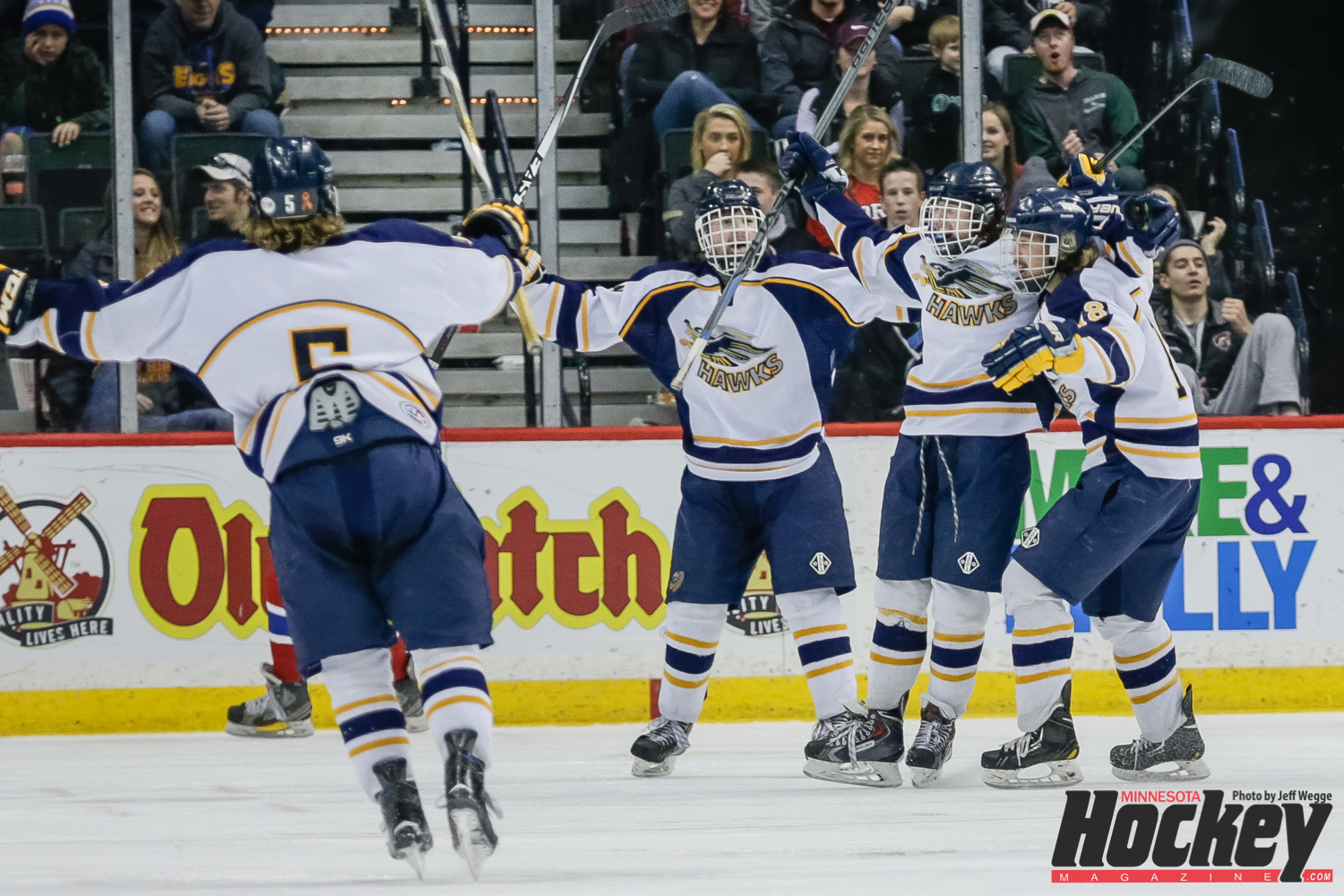 Hermantown’s Jesse Jacques celebrates with teammates after his second-period goal which turned out to be the difference in the Hawks’ 2-0 Class 1A state semifinal win over St. Cloud Apollo on Friday afternoon at Xcel Energy Center. (MHM Photo / Jeff Wegge)

St. Paul — Bringing a 1-0 lead into the third period of its Class 1A semifinal, top-seeded Hermantown junior Cole Koepke provided an insurance goal just 1:23 into the final frame to make it 2-0 against St. Cloud Apollo.

“Yeah, that really gets rid of some of the ulcer juices right there,” said Hermantown Coach Bruce Plante. “(That) second goal is a coach-loving goal. I’ll tell you that.”

His team’s 2-0 victory Friday afternoon at the Xcel Energy Center landed Plante and the Hawks in the Class 1A state title game for the sixth year in a row.

“Yeah, isn’t that wonderful?” Plante said. “It’s great, man. I think every team in Minnesota has that same aspiration.

“And what are the odds to be in that game six years in a row? It’s almost laughable if it didn’t hurt so much.”

That’s because unlike other teams across the state, Hermantown has been there the past five years without winning the title. Four of those five, Plante said his players played really well but they just didn’t win. He strives to get his teams playing a hard game and doing the best they can.

This year marks their 12th state tournament. Their only title came in 2007.

In Friday’s game against St. Cloud Apollo, Hermantown, which scored eight goals in its quarterfinal game against Spring Lake Park, was held scoreless until the 6:44 mark of the second period. That’s when sophomore Jesse Jacques fired a blistering slapshot from the top of the circle past Apollo’s goaltender for a 1-0 lead.

“Yeah, that was huge, just to get that first one,” Jacques said, as he addressed the media in the pink and white Minnie Mouse bicycle helmet that Hawks players give to the player of the game. Wearing it for the first time, he said it felt “pretty good.”

Keeping the Hawks off the scoreboard for as long as possible was part of the game plan for St. Cloud Apollo Coach Pete Matanich.

“I thought our guys came out and played exceptionally well today,” he said. “I was hoping we’d be able to put a little pressure on them.”

Offensively, Apollo had its chances, with a breakaway as time ticked down in the first period and a shot off the outside of the pipe, but Hermantown’s defense didn’t give them much and shut them down.

Hermantown’s junior goaltender Luke Olson faced just 13 shots in his shutout. The Hawks haven’t given up a goal in this year’s state tournament. Plante said that their defense has been overlooked all season long.

“We do play good defense, and I think any good championship team has to do that,” he said.

For the final game, it’s a rematch of last year’s 1A championship between East Grand Forks and Hermantown. The Green Wave was victorious last year, 7-3. The two squads met earlier this season, resulting in a 3-0 win for the Hawks.

So, what might make this year’s championship game different from the rest for Hermantown? Koepke knows that this year’s roster, including eight seniors, brings more experience to the table this time. They’ll feed on adrenaline during the game, he added.

“It’s just going to be a good time to get some redemption from last year,” he said.