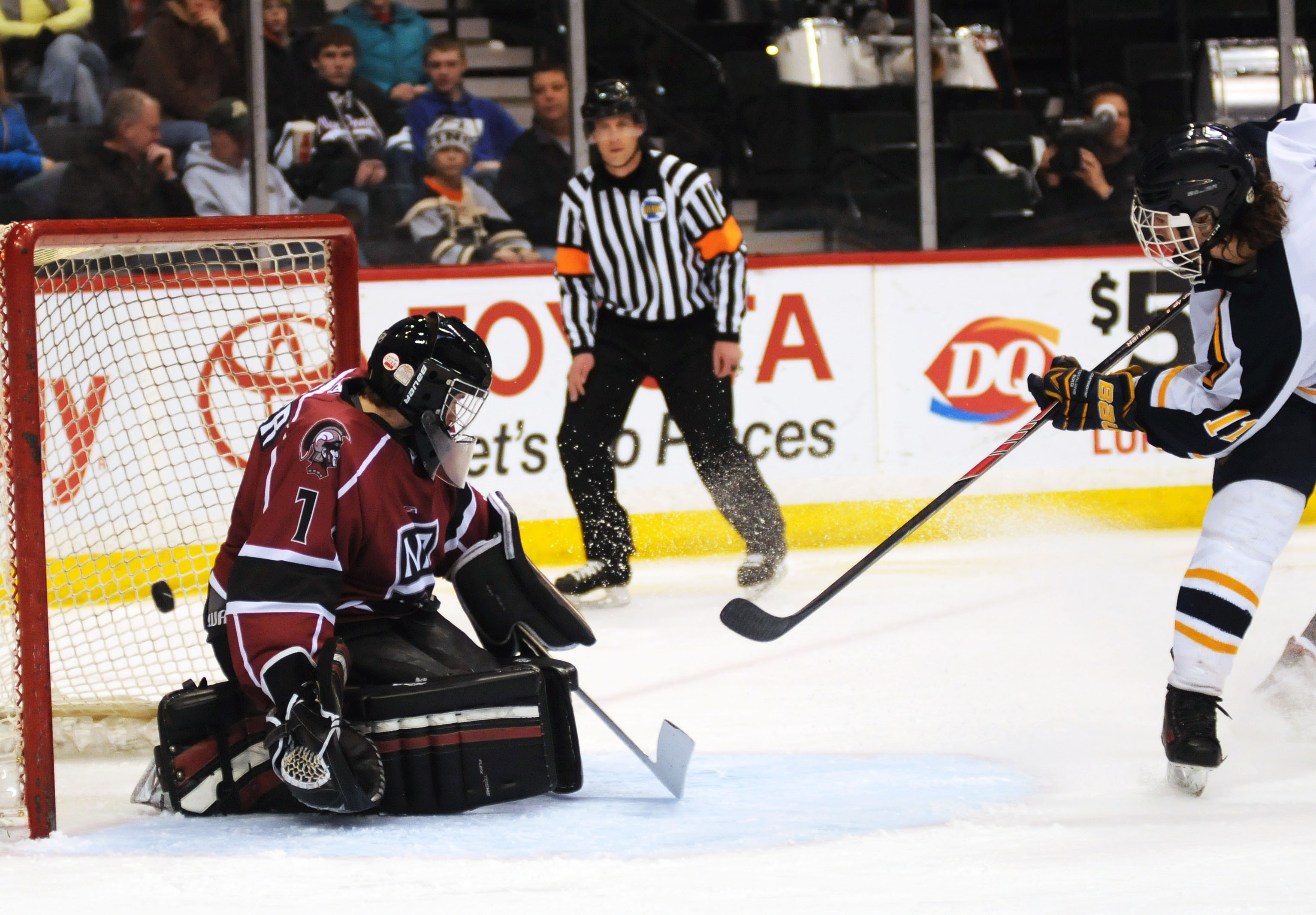 SAINT PAUL—For the Hermantown Hawks, they’re hoping the fifth time’s the charm. After beating New Prague 4-2 Friday afternoon in a semifinal game, the Hawks will skate in their fifth consecutive Class A championship game. The Hawks, of course, have been on the losing end of all four of those previous title games. In fact, Hermantown is 1-5 all-time in championship games.

Hermantown beat New Prague earlier in the season 7-3, but everything that happens in the regular season gets thrown out the door when it comes to playoffs – especially in the state tournament.

“It’s a pretty tough deal to play somebody and beat them, then play them again,” Hermantown coach Bruce Plante said. “I don’t think our kids were overconfident and they played well, but it’s just tough.”

Senior defenseman Ryan Carlson got the scoring started after he jumped the play and took it to the house all by his lonesome just over five minutes into the first period. Hermantown would take that 1-0 lead into the second period, but senior Kori Ochs doubled New Prague’s deficit just 56 seconds into the frame.

“[Wyatt] Aamodt had a great step up on that forward, the puck came out and I just tried to use my speed to get to the net,” Carlson said. “I don’t feel a lot of pressure, I mean it’s the last game I’ll ever play in this Hawks uniform and we’ll lay it out all on the line.”

Scott Wasbotten scored his first of two goals 1:17 into the third period to extend the Hawks’ lead to 3-0. New Prague finally showed signs of life as Austin Isaacson scored a power-play goal for the Trojans at the 6:32 mark of the third period. New Prague was able to stay toe-to-toe with Hermantown as far as shots are concerned, but the stingy Hawks defense kept the Trojans’ first line off the score sheet.

“They had a good game plan with the last line change, they put their first line on our first line and that’s a big line to go up against,” New Prague coach Chris Lonke said. “I’m really happy with how our first line adjusted to that because you could tell we were undersized and we just needed to get pucks in deep behind them.”

Wasbotten netted his second goal with 1:22 remaining in regulation on an empty net shot to give the Hawks the 4-1 lead. New Prague pulled their goalie one more time and Casey Busch scored with the extra attacker to bring the game 4-2, but that’s as close as the Trojans would get as that would be the final score.

“I bet when I go back and look at the tape I’ll see three or four mistakes or turnovers in the neutral zone and they made us pay big time today,” Lonke said.

The big story now is can Hermantown end their four-year drought in the title game en route to their second state title? The Hawks lost the three years to the now class AA St. Thomas Cadets and once to Breck the year before that.

“We’ve been there the last four years and it’s been a battle every year,” Wasbotten said. “And we want it bad this year, just as bad as every other year.”

“It’s great for our program with all the kids and the fans watching us,” Wasbotten said. “It’s amazing, not a lot of teams can do five in a row so it’s going to be awesome to play in number five.”