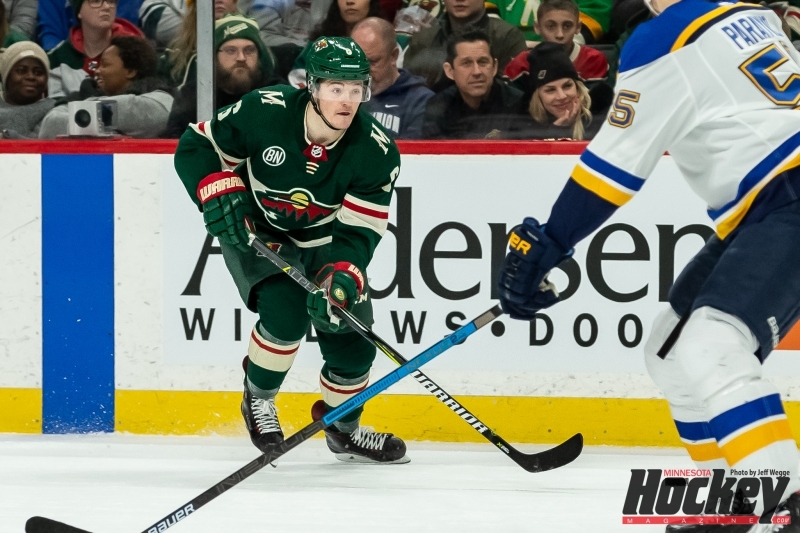 Ryan Donato stood in the Minnesota Wild locker room wearing a St. Paul Police Department hat as he talked with the media just minutes after scoring the overtime winner against the St. Louis Blues in his debut at Xcel Energy Center with his new team.

The hat recognized the Hero of the Game. Donato has skated in three games with the Wild and has already been honored with the Hero hat after two of them.

“I like them,” Donato said. “This is the new one to add to the collection.”

Donato earned the fun postgame tradition after giving the Wild a 2-1 overtime victory over divisional foe St. Louis on Sunday evening, only a week after the then-reeling Wild were shut out 4-0 by the Blues. Donato was on the ice with Zach Parise and Jonas Brodin when he fired a shot toward the goal from the top of the circle at the 2:29 mark of overtime. It beat Blues netminder Jake Allen, who stopped 35 shots in the game.

As the home crowd finally had something to cheer about at the end of a game – it was the Wild’s first win at Xcel Energy Center since a 2-1 decision over Columbus on Jan. 19 – Donato and Parise followed suit and celebrated in the corner. The Wild also snapped a six-game home losing streak.

The 22-year-old Donato came over to the Wild in a trade with the Boston Bruins for Charlie Coyle on Feb. 20. He impressed in his first couple games, scoring a pair of assists in his Wild debut during a 4-1 win in New York against the Rangers while playing a career-high 16:58. He became the 11th player in Wild history to have a multi-point night in his Wild debut.

Donato arrived with 6 goals and 9 points in 34 games with the Bruins this season. The goal against the Blues was the 12th of his career.

In Sunday’s game, he was part of the third line to hit the ice in overtime. Talking with the media, Donato gave a “thank you” shoutout to Bruce Boudreau for the coach having the confidence to put him out there in overtime. Donato has a bit more confidence, too.

“Those are the experiences that you’ll remember. I’m really happy about that.” 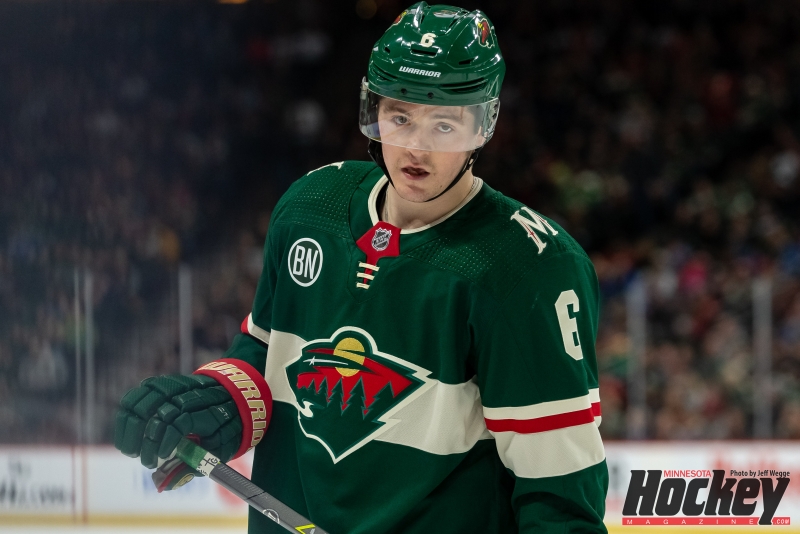 Donato started the game on left wing of the third line with Joel Eriksson Ek and Luke Kunin. Boudreau was forced to switch things up mid-game, however, when forward Pontus Aberg became ill. Boudreau shifted Donato up to play right wing with Parise and Mikael Granlund.

“Ryan told me the other day that he could play right wing,” Boudreau said. “I don’t know if he’s ever played there, or he was just feeding me a line.

“He got his opportunity tonight.”

Indeed, the left-handed shooting Donato said he’s played the position some in Boston and at Providence (AHL), plus he played center at Harvard.

Already having success with Eriksson Ek and Kunin, their line jumped from the start of the game. Donato had the first solid scoring chance but his shot missed the net. He finished the game with two shots and three that missed the net.

The Wild took a 1-0 lead on Jason Zucker’s first goal in 11 games about halfway through the second period.

“Ek and Kunny have been playing really well,” Zucker said. “And tonight they weren’t able to score, but we had other guys score goals. And Donato’s come in and played well.”

St. Louis’ Alex Pietrangelo tied the game on the power play at 7:26 of the third period, adding to the Wild’s penalty-kill woes of allowing at least one goal in each of the past eight games.

The biggest concern for Donato once overtime hit wasn’t anything about offense.

“Just wanted to make sure I wasn’t out there for a goal against,” Donato said.

No worries there. Donato finished with a plus-one next to his name.

Coincidentally, (or maybe not) the Wild are riding a three-game winning streak with Donato in the lineup as the NHL trade deadline approaches Monday afternoon. Donato was happy to seize the moment in overtime to help boost his new team’s hot streak.

“There’s a lot of good guys on this team, and they’re all pushing to get a win,” Donato said. “It’s been a pretty tough road for them in the last couple weeks. I think it was definitely huge for us to get these three wins.”