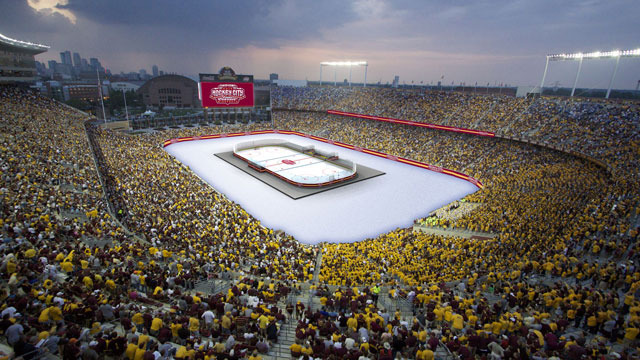 CHICAGO (December 17, 2013) – Eight ranked teams will compete in the High School Hockey Faceoff at TCF Bank Stadium in Minneapolis on January 11 as part of the Hockey City Classic Winter Festival.

“It is great to have the high school teams involved as part of the Hockey City Classic,” said United States Hockey Hall of Famer and former Minnesota North Stars General Manager Lou Nanne. “Outdoor hockey is such an integral part of the fabric of the sport and this promises to be a memorable event for all of the teams.”

The five-game High School Hockey Faceoff opens up with a matchup of top-10 girls teams as top-ranked Minnetonka faces No. 9 Eden Prairie at 10 a.m. Four boys games follow, and six of the eight competing teams were ranked in the latest Minnesota Hockey Coaches Association/Let’s Play Hockey.com Top 20 Poll. Highlighting the slate of boys contests is a matchup pitting No. 4 Benilde-St. Margaret’s against No. 16 Minnetonka at 12:30 p.m.

“The High School Hockey Faceoff is a tremendous event to showcase some of the top players and teams in the state of Minnesota at this exciting outdoor event at TCF Bank Stadium,” said Mike MacMillan, Executive Director of the Minnesota High School Hockey Association. “Intersport and the University of Minnesota have provided a unique opportunity for these teams and their school communities .”

Tickets for the High School Hockey Faceoff are available by calling (612) 624-8080 or visiting www.mygophersports.com and are good for all five games on January 11.  General admission tickets can be purchased for $12 online or at TCF Bank Stadium on day of game. Fans can also purchase tickets through each competing high school for $10.

The High School Hockey Faceoff is organized by Chicago-based sports and entertainment marketing agency Intersport, in partnership with the University of Minnesota.  For additional information, log on to hockeycityclassic.com, find us on Facebook (www.Facebook.com/HockeyCityClassic) or follow us on Twitter (@HkyCityClassic).

On Jan. 17, 2014, TCF Bank Stadium will play host to the Hockey City Classic – an outdoor college hockey doubleheader featuring premier men’s and women’s programs: University of Minnesota vs. Minnesota State University (women) at 4:30 p.m. CT and University of Minnesota vs. Ohio State University (men) at 8 p.m. CT.  The Hockey City Classic Winter Festival will provide fans 10 days of winter festivities, including: a free day of public ice skating; youth, high school and adult hockey events; private ice rentals; and much more.  For information, including breaking news, schedule information, a seating map and pricing options, log on to hockeycityclassic.com, find us on Facebook (www.Facebook.com/HockeyCityClassic) or follow us on Twitter (@HkyCityClassic).  The 2014 Hockey City Classic is organized by Chicago-based sports and entertainment marketing agency Intersport, in partnership with the University of Minnesota.