Last day to get tickets is Saturday, Feb 28. 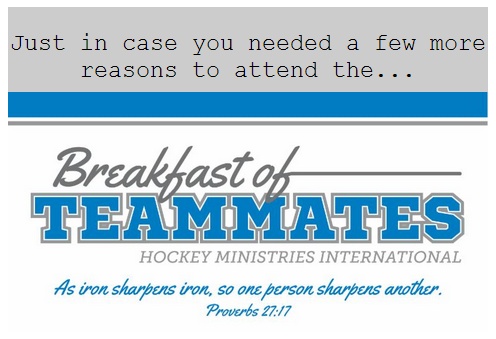 The event is a continental breakfast and silent auction and runs from 8:00 – 9:30 am.

Last day to get tickets is Saturday, Feb 28th.

Come early to get autographs and photos with current and former NHLers.
Be ready to bid on some awesome items at the silent auction.

Theme for this year is “Bringing Teams Together”.

For more information and to purchase tickets, click here for the official HMI flier.

HMI is a non-profit 501(c)3 charitable organization that exists to serve the hockey community. Since 1977, they have been active in every level of the game serving all levels throughout the world of hockey. Through many camps, chapels, hockey clinics, conferences, books, Faith Nights, Outreach Breakfasts and Hockey Player’s New Testaments they serve and support the spiritual needs of players, coaches, families and fans.

HMI is actively involved in ministry in six countries—Canada, The United States, The Czech Republic, Slovakia, Sweden and Switzerland—with expressions of interest from additional countries and key locations in North America.