NHL partners with GoPro to provide some incredible first-person footage 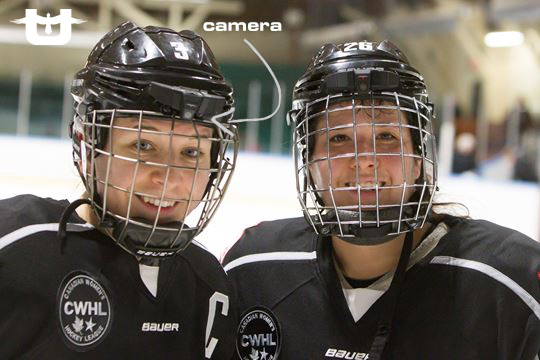 The NHL’s partnership with GoPro has provided us with some incredible first-person footage of some of the world’s best players showing off their skills, but we’ve yet to see the cameras used in live game action. Thanks to another wearable tech company, though, the CWHL’s Brampton Thunder were the first team in professional hockey history to wear POV helmet-mounted cameras during live play.

For their season finale this Sunday, Feb. 21, several Thunder players took the ice wearing the UHWK Show, a helmet-mounted POV camera that captures in-game footage. The Thunder wore the cameras for their contest against the second-place Calgary Inferno in a major season finale game.

“Being the first pro team to use UHWK is a privilege,” Thunder coach Tyler Fines said in a release. “It’s a game changer for a lot of players and coaches. You can do a lot with what this product can do; it’s good for players and good for analytics.”

“It was super HD. It was in focus the entire time, you could see and hear everyone,” she said. “You can look back and we could all learn how to right our wrongs. You can take any given drill and narrow it down to how you can make it better. It’s like you’re living the moment again.”

Hockey as we know it is evolving through a new era of elitism led by training and technology. The desire by players and coaches to enhance their skills is at its peak led by the growing love for the game, and supported by a widespread knowledge of the latest advancements in fitness, nutrition and skill development. Equipment continues to improve year over year and athletes continue to amaze us with what they are able to do when they strap it on. These advancements have undoubtedly played a crucial role in the impressive evolution of play we see today in the NHL and all the way down through the ranks of our minor hockey systems, like this weekend in Minnesota. While players will never stop benefiting tremendously from taking these pillars of their development very seriously, some may argue that advancements across these fields have begun to plateau. With players across the country and world actively seeking out the latest competitive advantages, the questions remain – what will be the next quantum leap in player development and how can it be used to separate from the pack in a new wave of learning?

Three former Canadian Hockey League, NCAA and professional hockey players have demonstrated a very unique point-of-view on it, bringing a new vision to the game through a lens like never before.

Born in 2014 in the rinks of Canada, Shea Kewin and Tim Priamo were Ontario Hockey League alumni utilizing scholarships provided by the league to attend Canadian University. Both actively pursuing their MBA’s while playing for the reigning national champions (University of New Brunswick Varsity Reds) they recognized a major opportunity to change the game and drastically reimagine how the next generation of players could develop a sport IQ like never before possible.

The UHWK Show is the first camera released by UHWK, and Kewin said the company was thrilled at the chance to work with the CWHL to capture the first-ever professional game with POV footage.

“The CWHL is a league that is leading the game with a lot of momentum,” Kewin said. “We were excited to see the game from the players’ point of view for the first time at such high speeds.”

The Thunder, whose players had been using the technology in practices, wanted to be the first to wear the technology and were enthusiastic about the opportunity. Some of the Thunder players, including Rebecca Vint, were wowed by what the technology can do.

“It was super HD. It was in focus the entire time, you could see and hear everyone,” Vint said. “You can look back on moments and we could all learn how to right our wrongs. You can take any given drill and narrow it down to how you can make it better. It’s like you’re living the moment again.”

The training and entertainment tool as they call it uses first person point of view video to improve situational analysis and spatial awareness, but is also a great tool to document young careers. It allows the coach or athlete to analyze mistakes and build on strengths from both first and third person perspectives. Ruggedly developed for the game of hockey but applicable to all other sports and recreational activities, the wearable video camera is “for everyone from the professional to the little leaguer”. Whether used in game, during training, or for leisure, UHWK captures the entire show, allowing users to easily relive, share and learn from these vivid and unique experiences.

To learn more about how you can get UHWK’s athlete camera tool to help you or your team unlock your greatest potential and lead the game, visit www.uhwk.com.