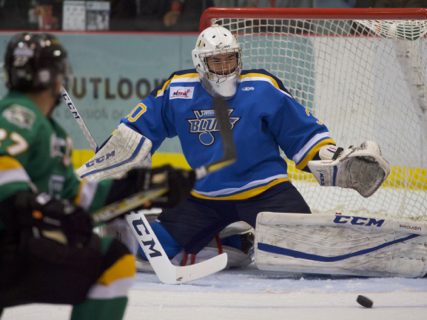 Everywhere I looked outside of the Super Rink in Blaine, I saw people bracing for hugs and giving hugs. The North American Hockey League (NAHL) Showcase was in town and it was the first time many families were seeing their boys after they sent them off to different cities around the country to pursue a hockey dream.

I was there with a friend whose son had just played. It was great to see his smiling face and get a picture of him hugging her. All the young men were coming outside with their “just showered” hair and dressed nicely in crisp suits. They each scanned the crowd looking for groups of family members beaming with pride. Each young man was slinging a hockey bag over his shoulders.

Made me a little teary.

I miss my boy. His dream has taken him out of the country. Jack is a goaltender for the Winnipeg Blues in the Manitoba Junior Hockey League. I still can’t believe it. We knew he wanted to pursue junior hockey but we put down a deposit for college just in case. As the summer progressed, we had to make a decision. It was a dinner with our son that finally sealed it. We had a heart to heart talk and then he said the words that set us on this path, “I will regret it if I don’t give it a shot.” I guess that’s all we had to hear.

So, we made the trek over the border in early September and after several weeks, he was handed the jersey with “Branby” on the back. He is a part of the Winnipeg Blues organization. He is experiencing his favorite sport in a nation that treasures it. Now he begins his journey through juniors.

I am thankful for many things as we watch him chase this dream. Billet families are incredible. We have one of the best. Sweet Alice and her family welcomed Jack with open arms and a wonderful kitchen. When we said goodbye to him on her lawn, I was sad but so happy that he found a place with a family who will support him and be there for him when his parents can only offer advice through a crackly cell phone call.

It’s fun to hear about his life in Canada. They use different words. They approach things in their own way. It’s all a part of the education of playing junior hockey.

Hockey TV is such a gift. It is so nice to see all of the team’s games. It’s still hard for us to not be there in the stands but we watch online even if he is on the bench.

This junior hockey experience is about growth. Growing in your game and growing as a person. This isn’t an easy journey for these guys. It is humbling, challenging and motivating at the same time. When he put on those goaltender pads for the first time as mite, we knew he was hooked.

That love of hockey and of goaltending has directed him to this path. I am excited and nervous for him. In the end, I am so glad he is “giving it a shot.” No regrets. That is the best way to live your life.

Editor’s note: Vineeta has started a Facebook group for other families who have boys in junior hockey. It is called Journey Through Juniors. She invites others to join the group and support each other as our boys go through this incredible experience.