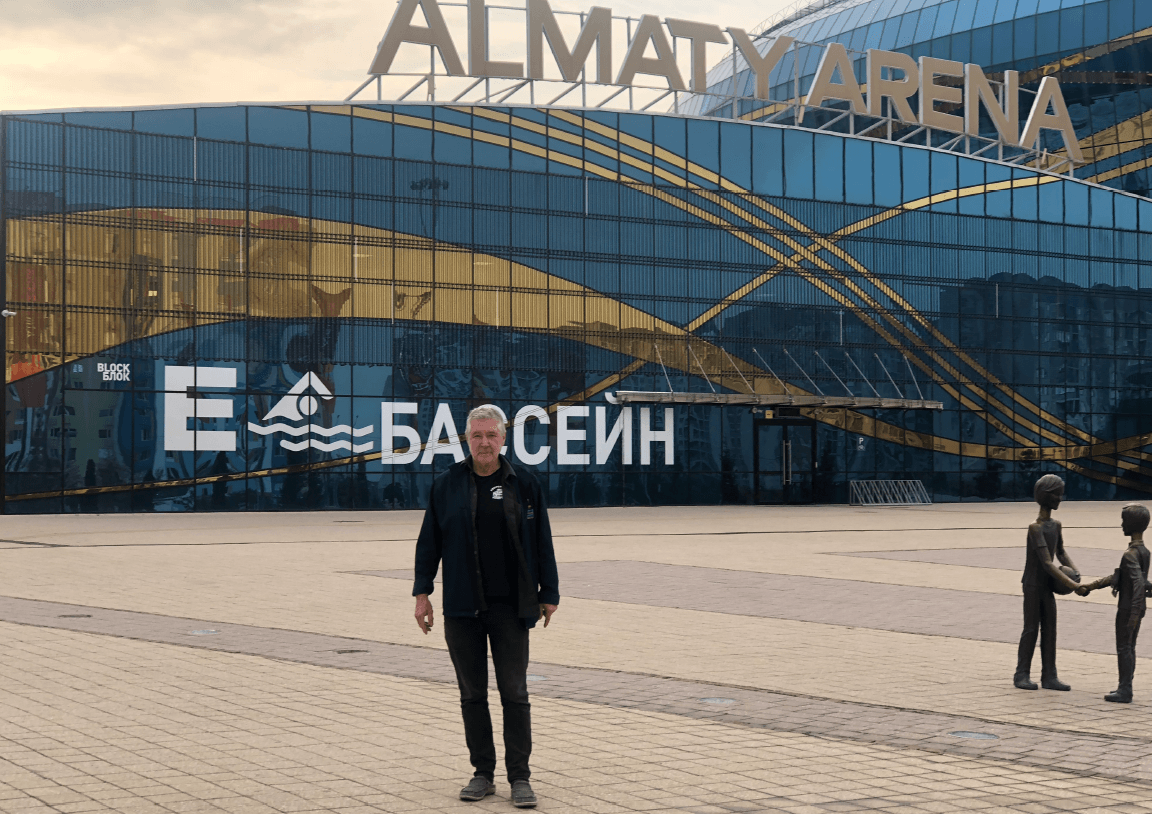 When we last heard from Professor Walter Epp, he was traveling  in and around the Himalayas. See previous story Here.

He just checked in again and provides an intriguing update to his Hockey Without Borders adventure.

Vlad and I were sitting in a traditional Kazak restaurant trying our best to communicate which was challenging with no internet and google translate. 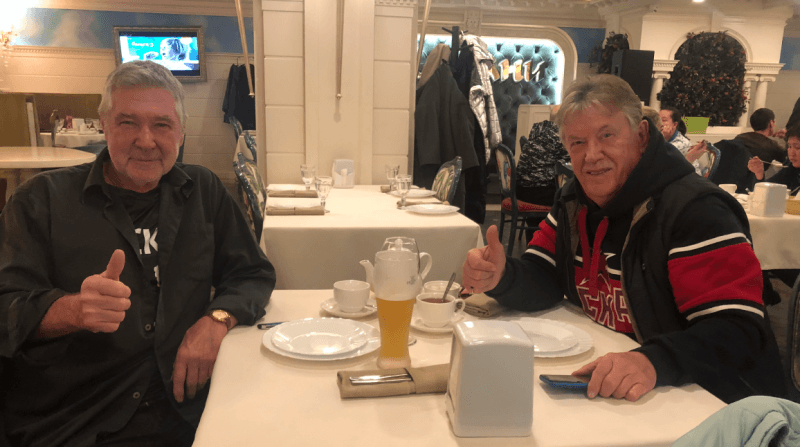 A youngish looking man, sitting with his wife and 3 kids at the next table, offered to facilitate and in the course of the evening, asked if I might be available, perhaps for dinner the next day, to help him and his business colleagues practice English. He was a ‘business man’ and owned several Language schools and Copy Centres. Sammy and I exchanged WhatsApp data and the adventure began. I should say it continued as this was several days into my stay in Almaty and an awful lot had already happened.

I met my Slovak teammates and we had a training session in the fanciest (by far) arena I ever played in. The arena that hosted the 2011 Asian winter games. Our training session was without our two young guns who were detained by security in the Riga Airport for violating the no smoking rule which might not have been so bad had they not shown signs of excessive alcohol consumption which, according to security regulations, made them ineligible to board the flight to Almaty.

So, at considerable personal expense they re-booked their flights and sobered up over night in a Riga Airport Hotel. But they appeared the next day, a bit haggard, in Almaty to participate in the first game in which we were competitive enough but lost 3-2 on a last minute goal by a slick Kazak skater.

Unfortunately things went south from there – straight south. We did eke out one win  but got blown out and for the most part we were struggling, not only to keep the opposition from running up the score, but just to score at least 1 goal. I’d been named Captain of the Fox Team but my role was largely ceremonial and limited to exchanging pregame gifts with the opposing captain, shaking the referees’ hands and leading the team in pregame yell surrounding the goalie with my “forecheck back-check, paycheque-One Two Three Fox Team routine.”

But that was it – touching the puck was rare – scoring was more or less out of the question, assists were hard to come by. The only positive point was that we didn’t get any penalties. I did get a penalty shot as I was in on the goalie when a guy checked me pretty good from behind, and because they were up by 7 or 8, and feeling sorry for us, the ref generously awarded me a penalty shot which I flubbed.

So how did we manage to ‘win’ the tournament after being so outclassed out hustled and out played? Easy – the other teams were all disqualified. Disqualified because they hadn’t followed Recreational Tournament rules of restricting players to non active league players. So, as there was no official tournament winner, I, as captain of the ‘winner by default and fair play team’, accepted the trophy.

There is an extensive development infrastructure that has developed a cadre of Kazak born NHL’ers and there are a lot of very good hockey players playing in the Kazakhstan Junior League – we know – we played against them.

But the tournament became a relatively minor footnote in the week long stay (Oct 11-18) in this jewel of a central Asian city with a booming economy ranking 5th in the world in millionaires (or was it billionaires?)

Let me list the highlights. Meeting Vlad: I was relaxing in the arena cafeteria between games when Christina, our team translator, came rushing in and said excitedly, ‘there’s someone who wants to meet you. ’When I inquired as to who that might be she said, ‘I
don’t know but he is old.’ Oh here he comes now.’ 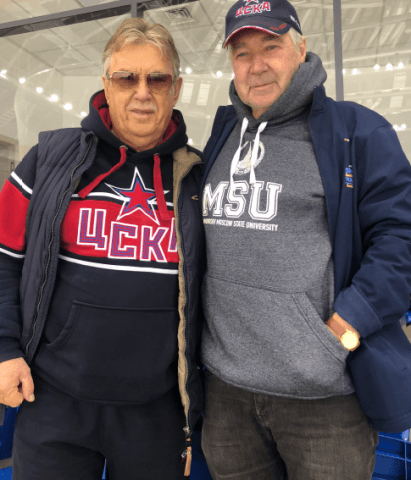 Vlad appeared, 5’10” stocky, full head of hair, a pleasant looking fellow. Vladimir Egorovich Bosenko, aged 73, with limited English but with an entourage eager to translate, former Soviet team hockey player in the 70’s, regular all Star in the Soviet professional league, playing for team Almaty Berkut in the 8 team tournament.

He had heard that there was ‘a big man’ ( they don’t say old they say big), playing for the Fox Team and he wanted to meet me. Imagine my surprise – in all the dozen or so European tournaments I have played in over the last years I had mostly always been by far, ‘the biggest’ and here was someone ‘bigger.’ I expressed my congratulations to Vlad and we became instant friends sharing our experiences and love of the game.

Vlad wasn’t named to the 1972 Soviet team but watched the Moscow games from the stands. Here are some of Vlad’s thoughts that I, even with my limited Russian, had no difficulty understanding: Valarie Karlamov is a god, Bobby Clarke is a devil. There are only two ‘real’ hockey teams in the world,  Central Red Army and Montreal Canadians.

When I suggested a third – the ‘Thunder Bay Thunder’ he was intrigued: +70 repeat Gold medalists! Snoopy, Santa Rosa, California? Could he join?

I told Vlad that I was pretty sure we could find room for him. He invited me to his home, I met his wife and family and saw his workshop, It turns out he is also an honored master talent in metallurgy. The undisputed highlight of the time in Kazakhstan was participating in the Regular Friday night Veterans’ Skate. Here we are pre-game. The two women more than held their own – they dominated. Vlad and I developed instant chemistry on the ice. His passes are exquisite.

Vlad and I are signed up for a tournament in Prague in April, 2019. 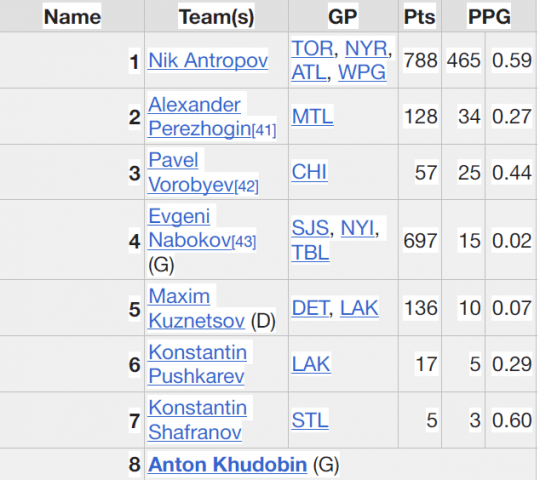 Check out some of the players in the tournament.

Some names you will certainly recognize!