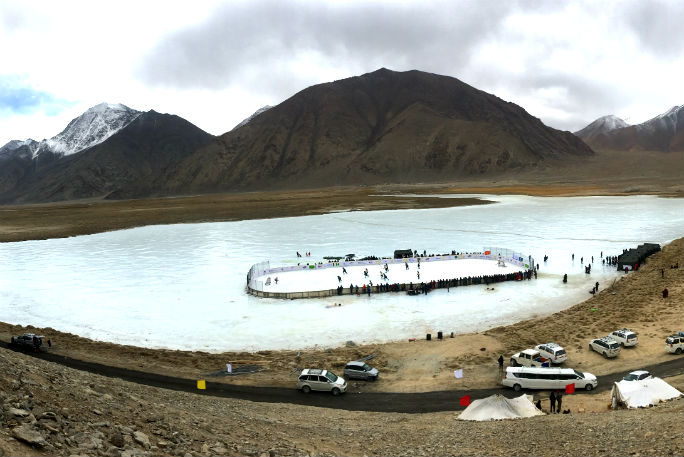 Latest Adventure Takes Him to the Himalayas at 14,000 ft 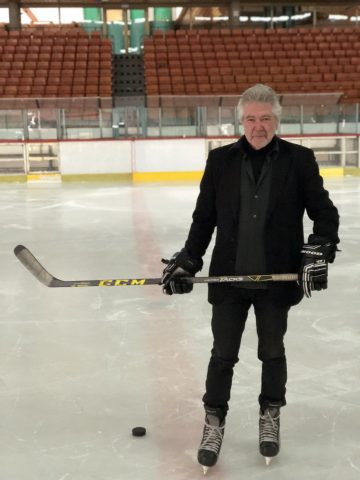 I met Professor Walter Epp several years ago while playing in an “Oldies” tournament in Zell am See, Austria.  As part of a pick-up team composed of players from the Twin Cities, Colorado and Thunder Bay, Ontario, Walter was part of the Minnesota Old Timers 60+ team that won the Gold Medal in 2012 against teams from Austria, Finland, Canada and Germany.  The “Professor”, as he was affectionately called, hailed from Thunder Bay, Ontario.  He is an Associate Professor of History Education at Lakehead University in Thunder Bay, and he joined the team while on a research trip in Europe.  A friend and noted local hockey acquaintance in Thunder Bay had played for the Minnesota team in 2010 and this connection and Walter’s personal account of the 2012 Europe trip that combined research and hockey can be found in a related article on this website.  Just search for Walter Epp.

Fast forward to Sept 24/25, 2018 at a seniors hockey tournament in Duluth.  For several years, Duluth has hosted an old-timers tournament of sorts (no officials) that includes teams from Mpls, Grand Rapids, Duluth and Thunder Bay.  And who should I run into playing for Thunder Bay…you guessed it, the Professor, Walter Epp.

While catching up with him at the tournament dinner party, he tells us about his latest adventure as a member of an organization called “Hockey Sans Frontieres”, or Hockey Without Borders.

This organization connects volunteer coaches with non-traditional hockey communities world-wide to help coach/develop youth hockey programs.  Some of the potential countries targeted in 2018-19 include Serbia, Lithuania, Kyrgyzstan, India, Bosnia, Greece, Hungary, and the Czech Republic.  For more information on this amazing organization, check out their website =>> HERE.

Walter on Hockey Without Borders 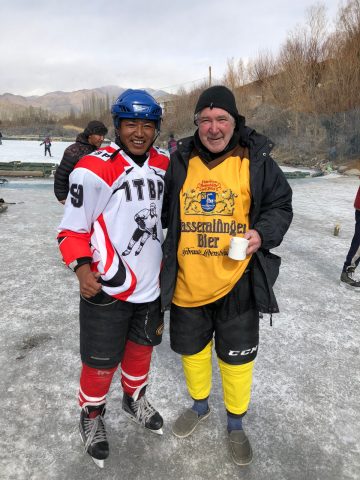 The goal of HSF is to support the development of hockey around the world and, while I like to play the game, as Professor Emeritus, Faculty of Education, I also love to teach and learn and share hockey history and legends and experiences through hockey poetry, prose, music and drama.

Most importantly however I encourage the athletes to express themselves artistically in poetry, prose and art about their hockey experiences and impressions on a template that can later be assembled into a sphere for display and viewing.

In October my hockey travels will take me to Savastopol, Crimea; Almaty, Kazakhstan; Bishkek, Kyrgyzstan; Bangkok, Thailand and Belgrade, Serbia where I will also take part in the 100th Anniversary commemorations of the end of WWI.

On February 6, 2018, Thunder Bay hockey player, Walter Epp, participated, as a member of the German based team, the Rainman All Stars, in the Guinness World Record ‘Highest Elevation Hockey Tournament’ in the Tangste region of Ladakh in northern India.

The Rainman All Stars, made up of 19 players from England, Finland, Germany, the Czech Republic, Austria and Canada met on February 1 for a conditioning camp in Leh, Ladakh, at 3500 meters and played a series of exhibition games against teams from the US, Slovakia, Germany, Asia and a local team the Ladakh.  The exhibition games were played on natural ice during the early morning hours as the direct sun makes the surface unplayable during the afternoons.

On February 4th the 6 teams set out in local taxis, hockey kit packed in a separate transport truck, over a 6000 meter pass to Tangste region where the world record event was to take place.  The scenery was as spectacular as the mountains roads were treacherous.

The teams were billeted in local guest houses with no heat and no water where you could see your breathe in the mornings, where water bottles froze during the night and where toilet facilities were primitive.

The record setting event took place at 4323 meters in -35 C windchill temperatures.  Each team was assigned a military tent, pitched on the shores of the wind swept ice, as a dressing and crowded into the players’ tent between shifts.

When asked how the altitude effected the game Epp responded “you could definitely feel the thin air but by keeping the shifts short we were able to keep up a good pace and although oxygen was available only a few of the lads from England needed it.”

The tournament, although fiercely competitive, featured great camaraderie on and off the ice as teams and individuals adjusted to the temperature, altitude, accommodations, food and playing conditions.

The highlight of the Himalayan Hockey experience for Epp, who at 70 was the oldest participating player, was the post tournament exhibition game against the local Ladakhi team that turned into the longest game of the tour with the locals repeatedly asking for “one more period please.”  It was, according to Epp, “shinny at its finest,” 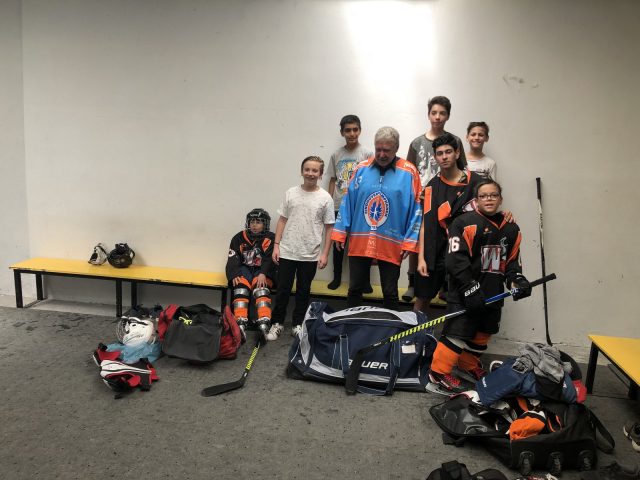 Other non-hockey highlights for Walter, and his wife Juanita, were Buddhist temples, ice stupas, visiting a local school, visiting the frozen salt Lake Pangong on the Chinese border, cattle and donkeys and packs of dogs roaming the streets of the town and villages, crossing the two highest drivable passes in the world and interacting with the friendliest people anywhere.

The return trip featured a stopovers in Dehli and Mumbai with Walter, in his new role as hockey ambassador for the organization Hockey Sans Frontieres, making guest coaching appearances in several countries before returning to Thunder Bay.

More on Hockey in the Himalayas

There are several good videos and personal accounts of this remarkable hockey experience at a 14,000 foot elevation.  Here are a few that you will enjoy…

Meanwhile, Back in the US 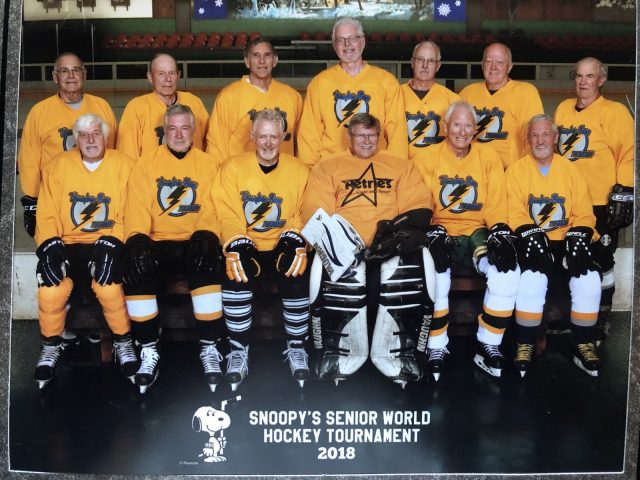 Walter not only travels to exotic locations abroad, but also plays in Canada and in US-based tournaments.  He traveled with his Thunder Bay team to the ever popular Snoopy’s tournament in Santa Rosa this past summer and his team won their age group.  As a writer and poet, Walter penned this poetic account of the championship game.

Play the game; You never know; The Ballad of Thunder; The way it was; 70+A Division; California Gold; As I saw it.

Billy on the puck

The outlook wasn’t rosy for the Thunder on that day
The nods were five to one against with but the final left to play
With our two lines against their three
Oh t’would be a gruesome fray
They’d turn our legs to lead, they said
that we’d be easy prey.
They came from Colorado with ‘some ringers’ In the fold
They had come to California intent on
winning gold.


‘Let’s play the game,’ our captain snarled
and sneered a wicked grin,
‘Our two lines are fast and strong
And plenty good to win,
Let’s see some Thunder pride,’ he said,
‘and show them they are wrong.’

‘Unleash the Thunder boys,’ he roared
As we took to the ice
And It wasn’t long until we scored
And made them pay the price
But they fought back (they weren’t bad)
And when they tied it up
We knew we needed someone big
To lead the Thunder to the cup.
A man to score a mighty goal
To put them back in place, to slow them down
To set them back and put them in a hole

And sure enough a man appeared
Thunder pride upon his face
‘I’m your man,’ he coldly sneered
I’m ready for the task
Clear a little lane for me
And I’ll blast one past his mask.’

Behind their net, back to the point
everything in sync
There he unleashed a fearful blast
That rattled round the rink
We all stood back and watched in awe
And as it sailed on past – time stood still
And to a man we thought
‘my gosh it’s moving fast.’

It was a thing of beauty, I watched it sailing by,
And I watched it as it found the twine
In that corner way up high.
Above the goalie’s glove it flew
To the only place that had the space
to squeeze that rubber through.

A mighty goal – we’re up two-one
We’ve got em on the run
And now the boys relaxed and smiled
And started having fun
We shut them down they whined
they swore
The Thunder win five – one.
And now we’re back from Santa Rosa
As CHAMPIONS once more

As Walter makes his way around the world, playing and coaching in far-off regions of the globe, we can be certain there is more commentary to come.  Walter is currently in Savastopol presenting a lecture series at the U and this weekend he will be the guest of Hockey Yalta doing on and off ice sessions.  Stay tuned for more.