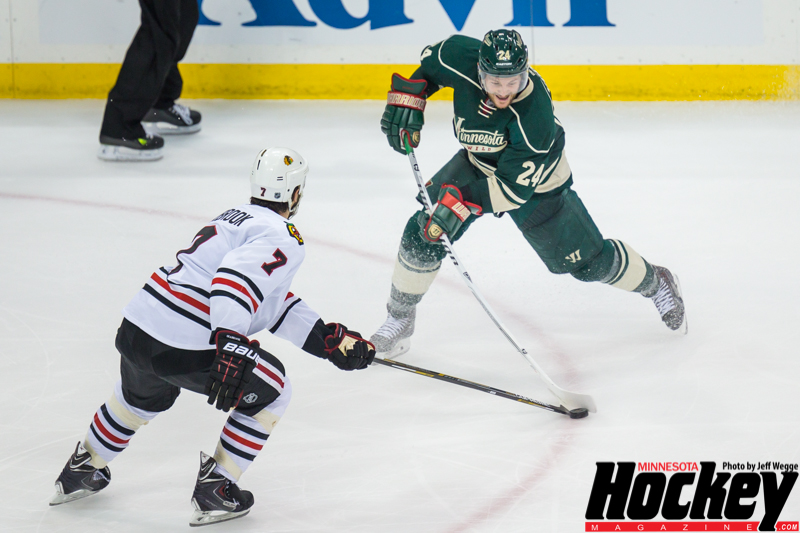 Minnesota’s Matt Cooke (24) attempts a shot with Chicago’s Brent Seabrook closing in during Game 4 of their Stanley Cup Playoffs second round series on Friday night, May 9, at Xcel Energy Center. The Wild defeated the Blackhawks 4-2 to tie the seven-game series at 2-2. (MHM Photo / Jeff Wegge)

The Minnesota Wild ensured that on Friday night with a thrilling 4-2 Game 4 win over the Chicago Blackhawks in front of 19,405 screaming faithful in St. Paul. The series is now tied 2-2 as the teams head back to Chicago for Sunday’s Game 5.

Ilya Bryzgalov, who made 18 saves in winning his second straight start, was not especially strong on goals by Patrick Sharp and Michal Handzus in the first two periods. But he finished strong with a huge right pad save on a Sharp breakaway late in the second followed by another big stop on Jeremy Morin in the third.

Chicago’s Corey Crawford finished with 27 saves and never looked comfortable in his crease, although that may have had something to do with the deafening sound of the home crowd repeatedly chanting his name in mocking fashion.

Sparked by the return of forward Matt Cooke from his recent suspension, Minnesota outshot the Blackhawks 31-20 and won for the fifth straight time at home this postseason, outscoring opponents 16-5 in the process.

“He’s a playoff performer,” Wild coach Mike Yeo said. “He was brought in here to do a lot of things and help you get to the playoffs, but the experience that he has, the way that first goal was created, that’s what we’re looking for.”

Cooke, whose knee-to-knee hit on Colorado’s Tyson Barrie in Game 3 of the Wild’s first-round series against Colorado cost him seven games, set up Justin Fontaine’s first career postseason goal to open the game’s scoring at 7:24 of the first period.

“He’s a playoff performer,” Wild coach Mike Yeo said. “He was brought in here to do a lot of things and help you get to the playoffs, but the experience he has, the way that first goal was created, that’s what we’re looking for.”

The physical winger played nearly 16 minutes in his return and led the team with five hits and three blocked shots. Cooke indicated his energy level should not be surprising.

“I should have fresh legs,” Cooke joked, referring to his layoff. “So I’ve got to go out there and lead the way and hopefully my energy is contagious and I felt like we were ready to go tonight right off the drop of the puck.”

Cooke delivered his first hit 20 seconds into his first shift and appeared to pick up right where he left off. He said his focus during the suspension was on making sure he was ready to step right back into the lineup and contribute for his teammates who, by beating Colorado without him, gave him the chance to play again this season.

“They helped me a lot and I wanted to go out and return the favor,” he said. “Part of that was me staying ready. So I think that going out and having the energy that I had, and being ready, I felt that right off the get go that I was in game shape. That benefited me a lot.”

“He’s been there, he knows what it takes to win,” Koivu said. “It’s not easy to come out after seven games. Great effort by him to go out there and lead by example.”

Jason Pominville, Nino Niederreiter and Jared Spurgeon also scored for Minnesota and the Wild continued to stymie the high-flying Hawks offensively in limiting them to 20 shots on goal. Minnesota has held Chicago to 22 shots or less in each game of the series but allowed just two goals at home after surrendering nine in Chicago in Games 1 and 2.

“We’re always making them come through five guys, and that gets frustrating,” Zach Parise said. “We’ve been on the other side of that and it’s tough to play against a team like that. I think we’re working hard, we’re making it tough and we’re just playing a good defensive game.”

That defensive game has cut down on the transition goals the Blackhawks capitalized on at home, something Minnesota will have to continue to limit to have any chance of stealing a road game and advancing to the Western Conference Finals.

The Wild and Blackhawks square off in Game 5 at 8 p.m. CT on Sunday night in Chicago on CNBC.