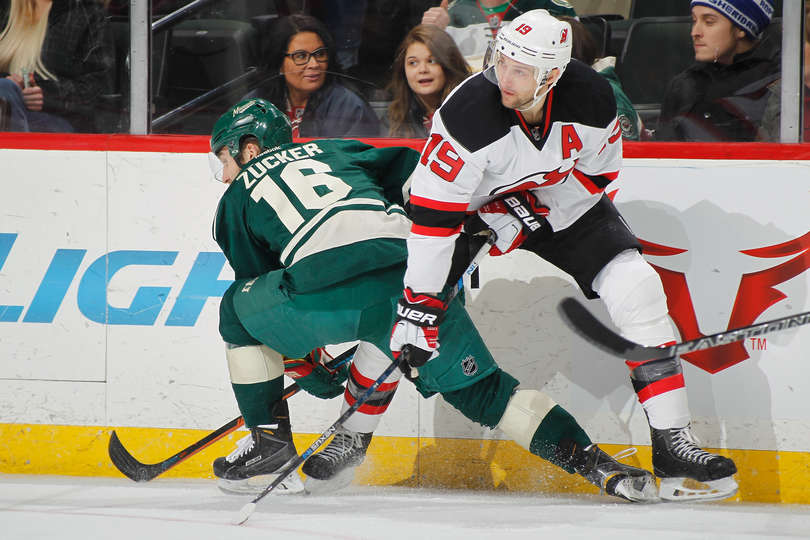 Jason Zucker and the Wild could not get anything going offensively against Travis Zajac and the Devils in New Jersey’s 2-1 win over Minnesota on Sunday night at Xcel Energy Center. (Photo courtesy Minnesota Wild/Bruce Kluckhohn)

St. Paul – The seventh consecutive home crowd of more than 19,000 settled into the Xcel Energy Seats Sunday night possibly looking for the antidote to a thoroughly depressing day in Minnesota pro sports.

It was not to be.

The New Jersey Devils, losers in their previous three games and beset by injuries, scored two third-period goals to defeat the Wild 2-1 and leave the Sunday expectations of Minnesota fans frozen solid.

Earlier, the Vikings lost to Seattle and the Timberwolves lost to Dallas in Minneapolis, but the Wild opened against an undermanned Devils team riding a St. Paul record of 14-5-2 this season as well as record of 4-1-2 in their previous seven games.

Even though Devils’ leading scorer Michael Cammalleri and key center Patrik Elias were among those sidelined by injury, the Wild were able to muster just seven shots on goal over the first two periods as New Jersey’s defense turned the game into a total snoozer.

Zach Parise, who scored the Wild’s only goal and his first against his former team, looked a bit ticked off when it was over.

“Ugly, uneventful game,” Parise said. “For whatever reason here we’re not playing with any pace, we’re not controlling the puck well, we’re not moving it well. We’ve just been flat.

“I mean, seven shots after two periods, in your own rink against a team – no disrespect to them, but they’ve got a lot of guys injured and a lot of minor league players are playing for ’em – that’s not good enough.”

No disrespect to the Wild, but for a long time they appeared almost uninterested.

“We didn’t get to our game,” forward Charlie Coyle observed. “We’re too good a team to come out flat like that. We can’t afford to have games like that.”

The result left the Wild, who defeated the Stars by the same score 24 hours earlier in Dallas, with 52 points in 42 games and trailing Dallas, Chicago and St. Louis.

Wild goaltender Darcy Kuemper stopped 15 of 17 shots in his first game since suffering a concussion more than two weeks ago, then noted that neither team put on an offensive show.

“I’m sure it was a boring game to watch,” he said.

The Wild finally got the crowd of 19,028 on their feet with 11 shots on net in the third period, giving them a grand total of 18.

The result and the way it happened stung, Parise said, especially after the win at Dallas.

Wild coach Mike Yeo admitted he wanted more but was not about to criticize his guys.

“For the most part our game has been pretty good lately,” he said.

Then he went on a rant about the fact that Minnesota received just one power play Sunday night.

“The one thing that’s really driving me nuts,” Yeo said. “We’re a really good hockey team; I can’t understand why we get one power play a game right now. It makes no sense to me.

It would also have been nice to give Minnesota’s fans a home victory Sunday, but like the Vikings and Timberwolves, the Wild couldn’t do it.