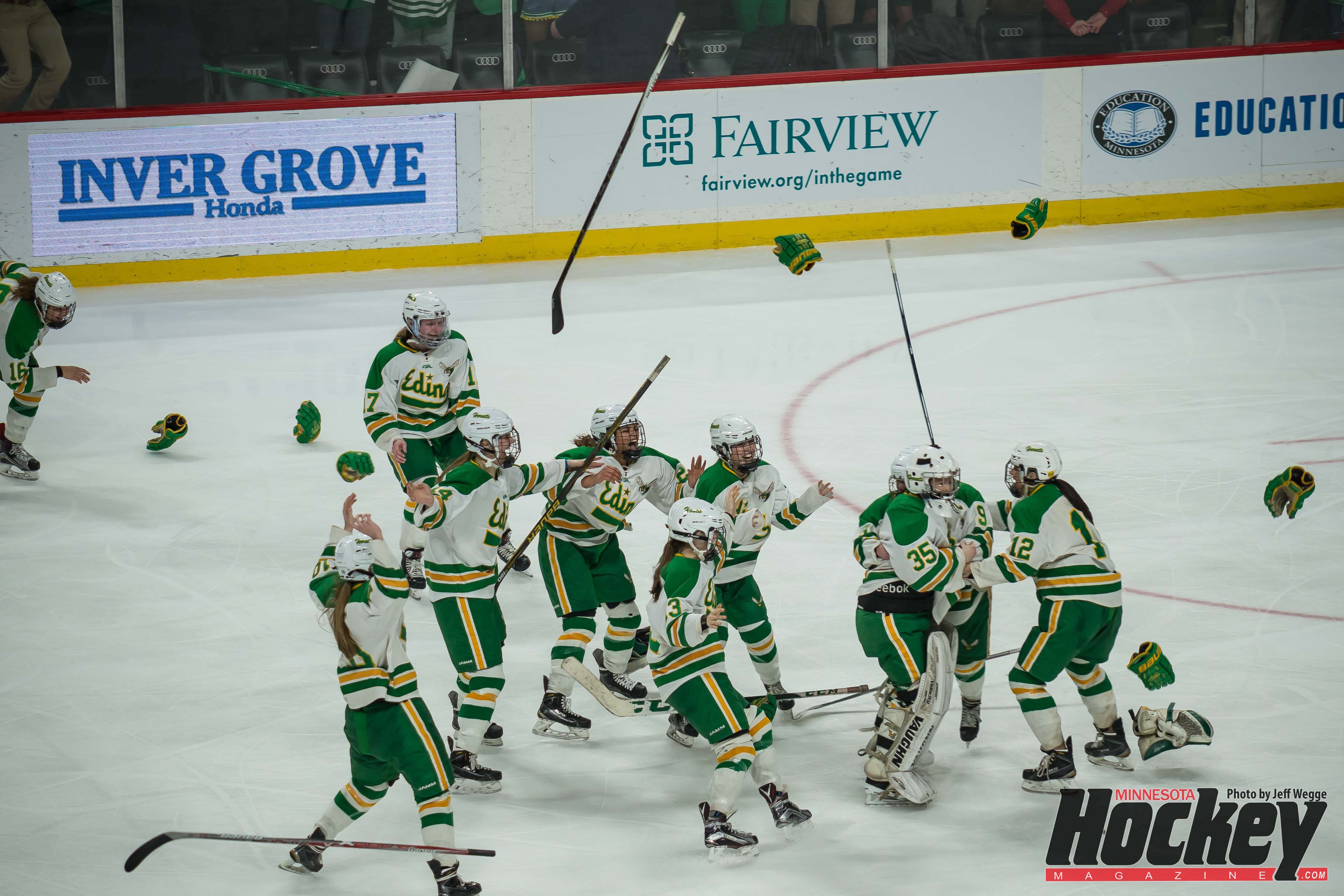 St. Paul — It didn’t take long for the Edina Hornets to take control of the Class 2A state title game against Blaine. Just 59 seconds into the first period Lolita Fidler deflected an Eva Hendrickson shot from the blue line under the pads of Bengals’ goalie Jaela O’Brien to put the Hornets in front.

Edina never looked back in a 4-0 victory at Xcel Energy Center to bring home its first-ever girls’ hockey state championship.The Hornets were runner-up twice before in 2010 and 2011. 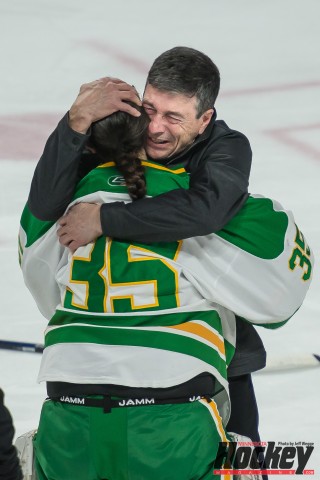 Edina Assistant Coach Scott Ryerse gets emotional as he hugs senior goalie Anna Goldstein after she records a shutout against Blaine to win the 2017 Class 2A championship. (MHM Photo / Jeff Wegge)

Blaine would recover from the early deficit and controlled much of the play in the first period but had nothing to show for it. Edina’s Grace Bowlby used a poke check to break up a Blaine odd-man rush to prevent one of the Bengals best scoring chances of the game. Late in the period, Edina’s offense started clicking. O’Brien made a spectacular save, one of 20 in the game, cutting across the cage to keep it a one-goal game but had no chance a few minutes later.

Kilberg tapped in a perfect pass from Evelyn Adams into an empty net to give the Hornets a 2-0 lead late in the first period.

The only second-period goal would be scored by Fidler. The Hornets continued to put shooters in great position with pinpoint passing. O’Brien didn’t have a chance on any of the first three goals she let in.

Blaine spent a lot of time in the offensive zone, but Edina would not allow the Bengals to get many clean looks at the net. When they did get pucks to the net, Goldstein was rock solid in goal.

The game was well in hand, but Goldstein’s best save of the contest came late in the third, stopping a breakaway. She was out in front of the blue paint, held her ground and got her right arm on the shot to deflect the puck into the corner.

Fidler scored all three game-winning goals for the Hornets this weekend and Goldstein and the Hornets’ defense would be the only team to shut out the Bengals all season.

Edina would add a fourth goal in the third period and coast the rest of the way.

“It doesn’t seem real,” said Reber, the first female coach to win a 2A championship. “This program has wanted this for so long I couldn’t be more proud of this group. They came to work every single day for this goal.”