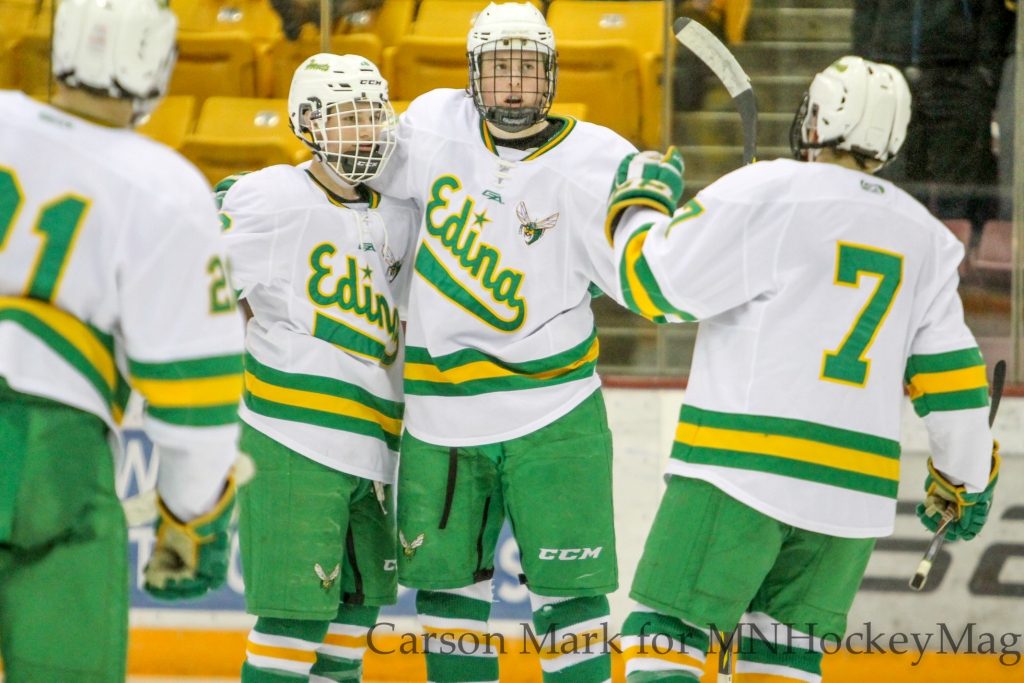 MINNEAPOLIS – The Edina Hornets continued their incredible run of State Tournament appearances as they hammered the Burnsville Blaze by a score of 10-1 in the Section 2AA final at Mariucci Arena. It marks the ninth consecutive berth to the State Tournament for Edina dating back to 2007 and is the 37th in Edina school district history. With a chance to deliver on a potential three-peat of state championship wins, this Hornet run is on the short list among their best ever.

Edina (24-1-2) thrives on the ‘big sheet’ of Mariucci Arena and took their puck moving game to the Burnsville Blaze early and raced to a 3-0 lead on goals by Matt Masterman, Parker Mismash and Henry Bowlby before the game was seven minutes old. An answer was in store for the Blaze at 10:45 as senior and Mr. Hockey semifinalist Jack Achan sprung Andy Schoen for a breakaway and a shorthanded goal.

Edina coach Curt Giles noted the Hornet fast start was important to stopping any potential momentum the Blaze could generate.

“When you are playing a good team like that and a good goaltender like that, you have to get off to a quick start and get things moving,” Giles said. “It doesn’t mean goals all the time but if you are having opportunities to score some goals early in the game, kids get confident, they get comfortable, they get moving.”

It was a critical point of the first period for Burnsville who, with Schoen’s goal, stopped the Hornet momentum on the scoreboard and subsequently applied the physical pressure on the Edina pulling the tempo of the game away. In doing so, the Blaze (15-11-2) were able to generate scoring chances including a 2-on-1 that Edina goalie Kobi Boe stopped after the Blaze grabbed momentum.

Burnsville was awarded a power play in the second period and Boe made a couple of difficult saves to snuff out Burnsville’s attempt to pull within one.

“I’ve always got to do my job and that is to stop pucks,” Boe said. “They had some good opportunities on the power play. I know right away after that we got a couple of goals and I knew in my head right away that that was a turning point.

“I just have to do my job back there and the guys will take care of business in the offensive zone.”

Mismash scored his second of the game and senior Dylan Malmquist tallied a shorthanded effort to help the Hornets pull away and cruise. It was a tale too familiar for many teams when the section playoffs loom and the Hornets continue to find extra gears.

Boe has been a steady backstop for the Hornets. They average 5.5 goals scored per game on the season, yet it has been his play in key times that can often go unnoticed. When asked about his elevated play Boe deflects his success to his teammates.

“It’s all about having confidence and with having my guys in front of me, they are the reason I feel like I am playing well,” Boe said.

Defenseman Paul Meyer notched a hat trick on the blue line for the Hornets, his first at the high school level. Meyer, a senior leader on the Hornets discussed staying focused on playing their game and that drawing on their recent trips to the Xcel Energy Center will be something his team can use to its advantage.

Even though the Hornets are playing well, the team and coaching staff feels as though there is room for improvement.

“They’re comfortable obviously and they are playing well,” Giles said of his team. “I still think we can play better. Tonight we got off to a decent start and kind of got a little sloppy in spots.”

That is a scary proposition for the entire state tournament field.