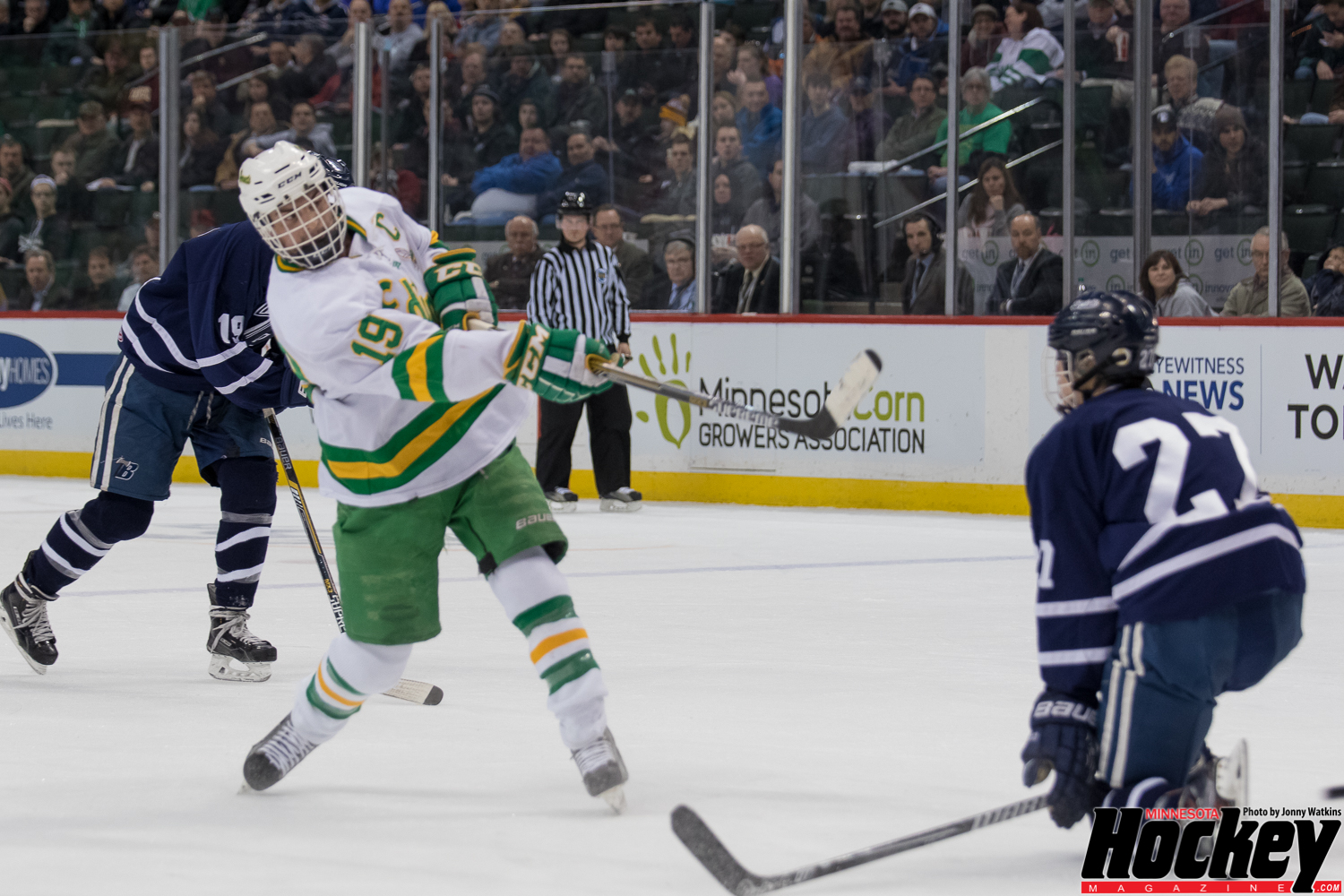 Edina’s Matt Masterman fires a shot against Bemidji in Thursday’s Class 2A state tournament semifinal. Masterman scored twice, including the deciding goal, in the Hornets’ 6-4 win over the Lumberjacks at the Xcel Energy Center. (MHM Photo / Jonathan Watkins)

St. Paul — Making their first state appearance since 1986, the Bemidji Lumberjacks didn’t have time to ease back into the state atmosphere. The two-time defending state champion Edina Hornets jumped out to an early 3-0 lead, but once the Lumberjacks were acclimated, Edina barely snuck away with the victory.

The Hornets survived a two-goal surge by Bemidji to defeat the Lumberjacks 6-4 in the Class 2A boys’ state hockey quarterfinals on Thursday at the Xcel Energy Center. Edina will face the winner of the matchup between the No. 3 seed St. Thomas Academy Cadets and the random draw Duluth East Greyhounds.

Hornets’ coach Curt Giles sees Edina’s ability to finish off the Lumberjacks lucky considering the type of game it was in the end.

“A game like this, you push, they push back, and then you push back again,” Giles said. “It went back and forth a couple times and fortunately for us, we came out on top.”

The Lumberjacks displayed a nervous energy to start the game and Edina took advantage. Bemidji netminder Grant Tharaldson appeared to lack confidence in the opening minutes of the state quarterfinal and Edina forward Matt Masterman made sure to make the most of the opportunity.

Masterman’s score along with goals from Garrett Wait and Parker Mismash, gave the Hornets a 3-0 lead halfway through the period, a lead they took with them into the locker room.

“They were a little shaky in the beginning,” Masterman said of the Lumberjacks. “It was nice to get the offense going early.”

But even with the early lead, the Lumberjacks weren’t about to call it a game after the first. As the Hornets sat with comfortably up 3-0, Bemidji made the Hornets uncomfortable.

16 seconds into the second period, junior forward Rocky Copiskey buried the puck in the Edina net and 27 seconds later, Copiskey passed the puck to teammate Nick Leitner who scored once again on Edina goaltender Kobi Boe.

“We just stayed the course,” Chiodo said. “We talk about it all the time: what’s our game? What are we going to do? What our M.O.? What’s our identity? Those are things we talk about non-stop.”

Hanging on to a 3-2 lead, the Hornets also stayed the course. After they settled themselves, the Curt Giles led team got right back to where they started early in the game. Even with the second-period surge from the Lumberjacks, Edina extended its lead to 5-2 with goals from Bram Scheerer and Masterman.

Yet, as the Hornets appeared to be headed on their way to the state semifinals, the Lumberjacks weren’t about to hand over the victory. Two goals in the final minute from Jack Johnson and Josh Lusby narrowed the gap to 5-4, but an empty-netter from Edina’s Casey Dornbach ended Bemidji’s state semifinal hopes.

Giles keeps the game in perspective whenever his team allows another team back in.

“Sometimes you forget these are 16 and 17 year old kids, not pros or college players,” Giles said. “The tendency is that when you are up by a couple goals you just kind of get through this process and just glide through this thing.

A state semifinal berth didn’t come as easy for the Hornets as it has in years past, and Giles attributes this to Bemidji’s fight till the final whistle.

“I give Bemidji credit,” Giles said. “The easy thing [for them] to do was say, ‘hey we’ve had a nice tournament. We played the 11 o’clock game 5-2, and let’s take our work home.’ They played hard right to the very end.”