Edina avenges loss to Centennial to repeat as state champions 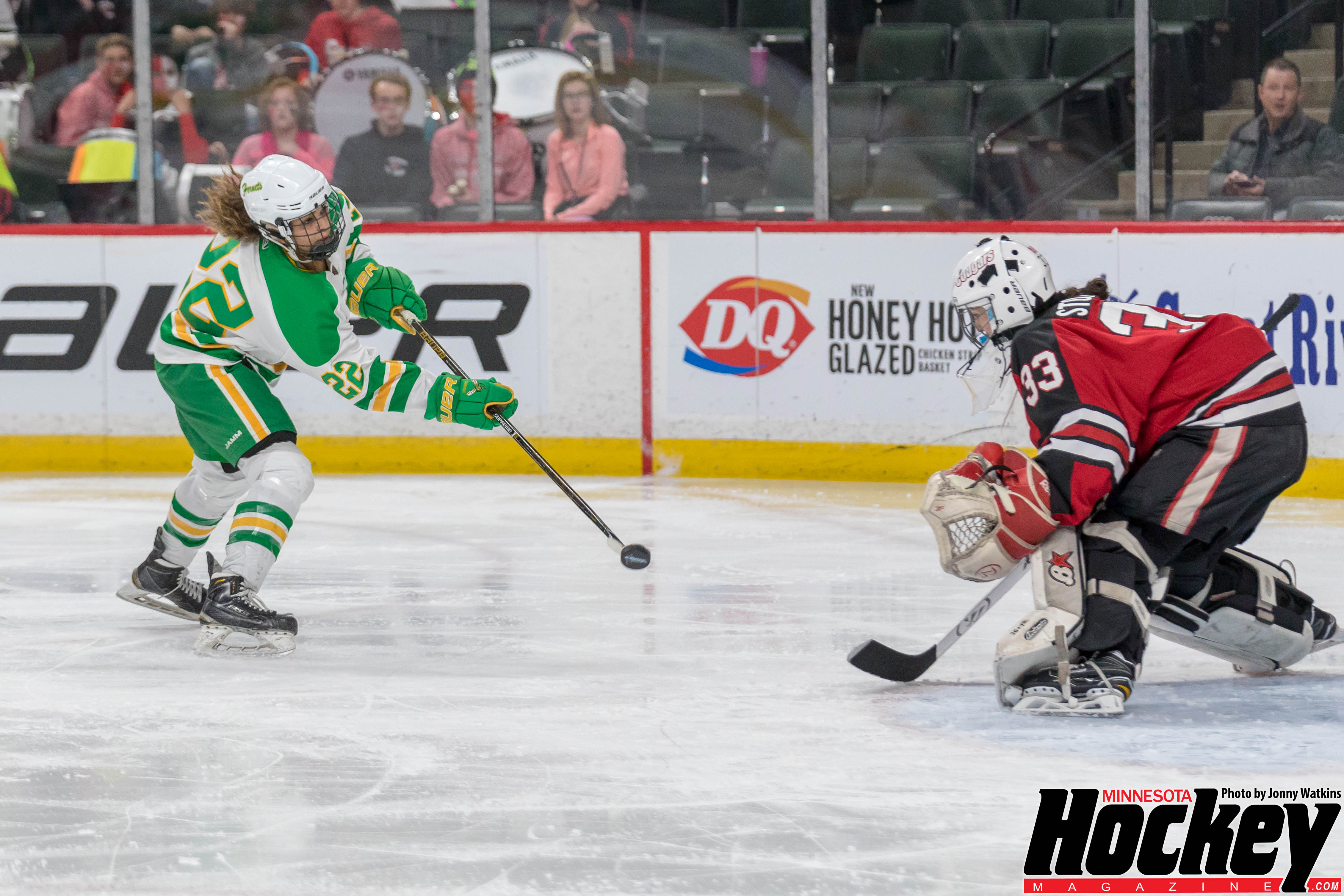 Edina’s Aliyah Lance releases the shot that proved to be the winning goal in the Hornets’ 2-1 win over Centennial in the Class AA state championship game on Saturday night at Xcel Energy Center. (MHM Photo / Jonny Watkins)

Edina avenges loss to Centennial to repeat as state champions

St. Paul — After her team’s semifinal win over Eden Prairie on Friday night, Edina coach Sami Reber did not hide her excitement about getting another shot at Centennial, one of only two teams to beat the defending state champion Hornets this season.

“I think if we could have picked the opponent we wanted to play in the state championship game, it would be them,” she said.

Top-seeded Edina (28-2-1) made the most of that chance in Saturday’s girls’ Class AA title game with a 2-1 win over No. 2 seed Centennial (25-4-1) to capture its second straight state championship. Edina closes the season with 14 consecutive wins.

Aliyah Lance’s goal just 2;39 into the third period snapped a 1-1 tie and proved to be the game winner as Edina goaltender Megan Smith made seven of her 13 saves in the final period to preserve the lead.

Edina’s Lolita Fidler found Lance coming through the slot with speed and Lance did the rest with a slick move on a defenseman before roofing a shot over Centennial goaltender Mackenna Stoterau who finished with 25 saves.

“Our team is so talented with so many girls that all bring something to the table,” Lance said. “So to be able to be a part of that and just work as a team, just get the bunces going our way, it’s just great.”

Lance’s goal came roughly two minutes after Centennial’s Anneke Linser rang a shot from in close off the right post in the period’s opening moments. 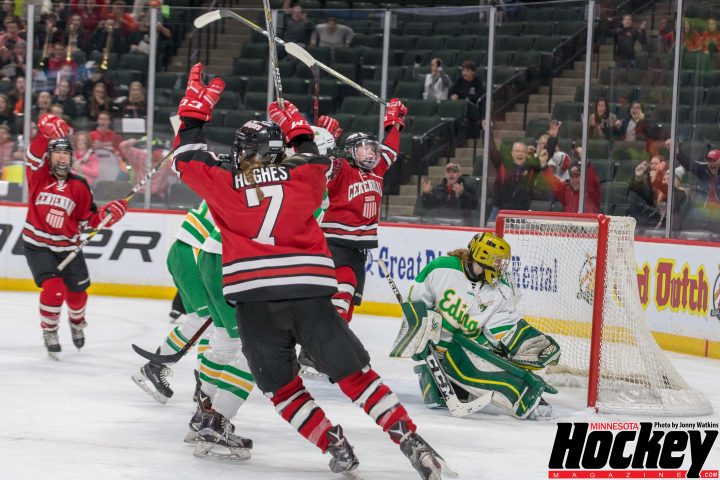 Emily Oden broke a scoreless tie 8:38 into the second period when her slapper from the top of the left circle beat Stoterau with the aid of a Lolita Fidler screen. Six minutes later, Centennial’s Gabbie Hughes who, along with teammate Linser and Edina’s Oden are Minnesota Ms. Hockey finalists, scored a power-play goal to tie it up heading into the final period.

Despite a 15-7 shot edge with only a goal and a tie game to show for it, Reber said the Hornets were almost giddy during the second intermission.

“We’ve been in situations like that before,” Reber said. “We had 17 minutes left of our season and, with seven seniors on the team and a big junior class as well, I know a lot of those girls were not going to have any regrets coming off the ice.”

there were no regrets for an Edina team which had a target on its back from opening night on.

“Coming back the second year, everyone’s out to get us” Oden said. “To defend it is super hard and to win it again is definitely special.”

The teams played to a scoreless first period in which the Hornets outshot the Cougars 7-2 with neither shot coming from Centennial’s top line of Hughes, Linser and Emily Nadeau. The trio entered the game with a combined 82 goals and 184 points on the season but, of the 24 shots they attempted against Edina, 16 either missed the net or were blocked. 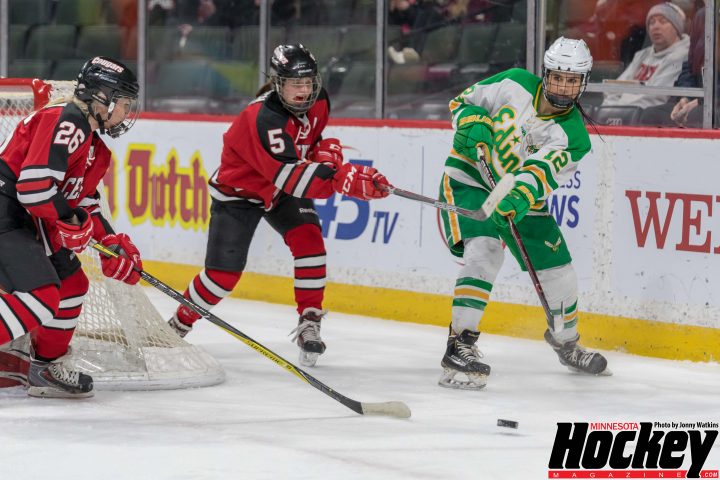 “They really gave us a dogfight,” Linser said. “It was hard to get to the net and they were on us. We did what we could and we tried our best.”

The Hornets said the game plan against Linser and Hughes in particular was to be as physical as possible at the risk of taking penalties.

“We spent a lot of time on how we were going to defend them but kind of just playing our own game, that’s all we can really do,” Edina defenseman Eva Hendrickson said. “We gave them the credit they deserved but, in the end, our players, I think, took it to them.”

“Physicality is something we definitely hype as a team and when you’ve got two players who you know are going to play a lot of minutes in a game, you want to wear them down as much as possible,” Reber added.

The Cougars complete the best season in school history with their first state championship game appearance and their heads held high.

“We’re proud of what we’ve done,” Linser said. “I mean at the beginning of the season our goal was to get to state, and as the season went on we knew we could do something really good at state. And I’m proud of what we’ve done and the hardest thing is letting go of this team because they’re a bunch of my best friends.”
“I couldn’t say it any better,” Hughes said through her tears. 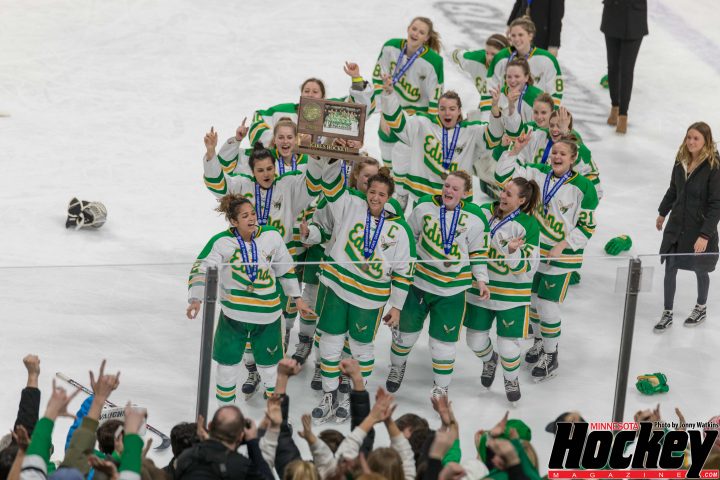