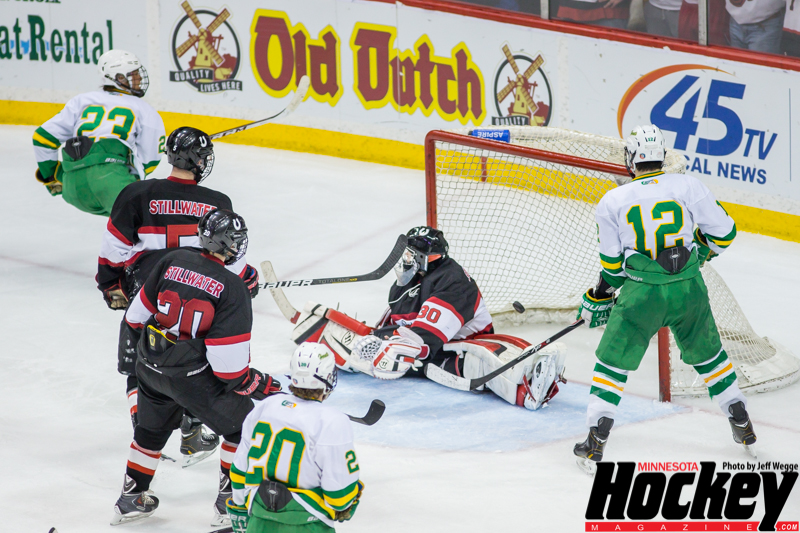 SAINT PAUL—Edina showed no interest in becoming Stillwater’s third straight upset victim in the Hornets’ quarterfinal matchup with the Ponies. The 2013 Class AA state champions ensured they would not go the way of White Bear Lake and Hill-Murray—each casualties of Stillwater’s Section 4AA title bid—with a four-goal first period en route to a comfortable 6-1 win to end the Ponies’ Cinderella run.

The Hornets, making their eighth consecutive state tournament appearance and 25th overall, proved to be too much for the upstart Ponies in just their first March visit to St. Paul. The early deficit forced Stillwater out of its defensive element in its effort to come back.

“That was not part of the game plan, for sure,” Stillwater coach Matt Doman said. “You fall behind to a team like that and it’s going to be a long night for you.”

Edina coach Curt Giles said he watched Stillwater’s win over Hill-Murray and knew his team needed to play with a lead.

“Stillwater’s got a good hockey team,” Giles said. “We wanted to get control of the game as quickly as possible and the kids got off to a good start, got rolling and I thought they did a pretty good job.”

Hornets defenseman Tyler Nanne was a dominant force all night, scoring four goals, including three in the game’s first 11 minutes, to raise his season total to 12. Meanwhile Dylan Malmquist added four points of his own on a goal and three assists giving him 43 points overall. Edina goaltender Andrew Rohkohl backstopped the win with 12 saves but was not tested often.

Nanne scored the game’s opening goal just 54 seconds into the contest when he dumped the puck into the Stillwater zone only to have it bounce off the end boards and deflect in off of Ponies goalie Josh Benson.  His second goal was just as accidental as it went in off the stick of Stillwater defenseman Zac Eder-Zdechlik.

“Honestly I didn’t see [the first goal] go into the net until I looked up at the megatron,” Nanne said. “It was kind of a fortunate bounce and then the second one I was actually going backdoor to Malmy and it went off the opponent’s stick right into the net.

“Usually I’m kind of an unlucky guy so it was kind of a holiday out there for me.”

“Sometimes in this game you make your own bounces,” Doman said. “They came out hard and they dictated pace of play to start the game and you’ve got to give them all the credit in the world.”

Nanne completed his hat trick at 10:36 with only Malmquist’s shorthanded goal two minutes earlier standing in the way of Nanne completing a natural hat trick.

“Any time you start down 2-0 you know you’ve got to come back right away,” Stillwater’s Brandon Jungmann said. “When they pop a shortie like that, it kind of takes the wind out of your sails.”

Casey Dornback’s goal off a 2-on-1 with Malmquist created by a Stillwater turnover boosted the lead to a commanding five-goal cushion at 4:22 of the second. But the Ponies got on the board just 1:29 later as Sam Sagissor’s shot from the blue line was stopped by Rohkohl but rebounded right to Jungmann who buried his ninth goal of the year.

But that’s as close as Stillwater would get as the hole dug in the opening 11 minute proved to be too deep.

Jungmann conceded Edina’s experience advantage was a factor in the slow start.

“We had a little more jitters at the beginning of the game playing in front of all these people, the biggest crowd we’ve played in front of, so we were a little antsy to start,” he said.

Nanne capped off his night with a third-period power-play goal, his third such tally of the night. Nanne later joked that he had scored four goals before, but in a 3-on-3 league.

“I don’t think I’ve scored that many goals [in one game], probably, in my lifetime,” Nanne said. “Tonight was just a night that I got most of the bounces my way.”