Hornets move on to defend their title

Garret Wait’s goal with 11 seconds to go in the
second period leads Edina over Eagan. 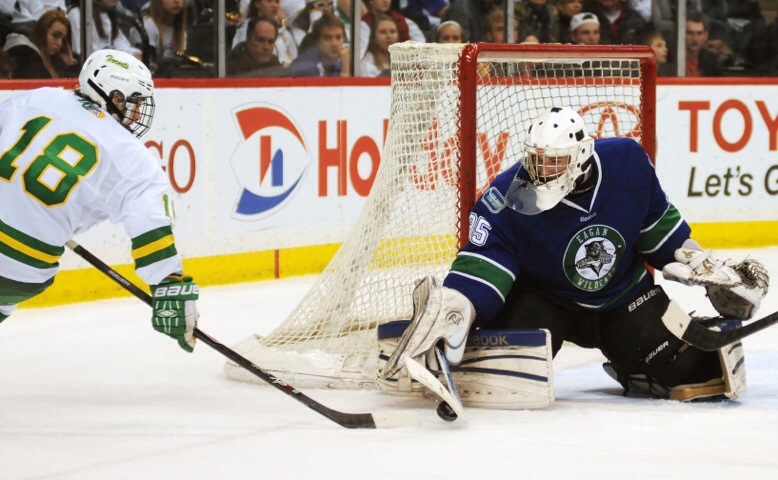 SAINT PAUL—The last matchup at the Xcel Energy Center on Friday night had all the ingredients for a great game, and possibly a great upset. The No. 1 seeded Edina Hornets are the defending Class AA state champions, while the no. 5 seeded Eagan Wildcats flew under the radar this year before knocking off AA newcomer St. Thomas Academy for a trip to St. Paul.

In what was a game that came all the way down to the wire, the Hornets were able to tame the Wildcats, and move on to the Class AA state championship game tomorrow night.

Edina got on the board first just 1:52 in the game on a goal Eagan would surely like to have back. After Wildcat goaltender Andrew Lindgren shut the door on a Dylan Malmquist scoring opportunity, an Eagan defender appeared to try and clear the puck to the corner, but only got a piece of the puck, and swatted it into his own net. Malmquist would be credited with the goal.

Though Edina controlled much of the play in the period, the Wildcats had their opportunities to knot the game at one. Eagan managed to hit two posts on the power play in the first period before Edina was able to clear the puck.

Edina controlled the play for most of the contest, but Eagan held them scoreless for nearly 32 minutes after Malmquist’s goal, keeping the game at 1-0. Then, late in the second period, Lindgren would come up big, making an incredible glove save on Malmquist, who seemingly had a wide open net. Lindgren could only hold the Hornets off the board for so long, though, and with 11 seconds remaining in the second, Edina triggered one.

Hornet forward Casey Dornbach made a nice drop pass to Garrett Wait while on an odd man rush, and Wait wristed a shot from the high slot over the glove of Lindgren for a 2-0 lead to close out the second.

“It was crazy in the locker room after that,” Wait said. “We we’re going crazy.”

The Hornets would go on to control play most of the third, but the Wildcats were still clawing their way to get back in this one.

With Lindgren pulled in favor of the extra attacker, Eagan closed the gap to 2-1 when senior forward Jack Jenson threw a puck on net from a bad angle and it trickled just over the line for the goal with just 46 seconds remaining. On the ensuing faceoff, Lindgren would again head to the bench in hopes of the Wildcats being able to pump another one past the Hornets, but Malmquist would strike again, this time with an empty net goal with 15 seconds remaining to seal the deal for Edina.

“We wanted to spend as little time in our own zone and get that thing out as fast as we could so we could get it down to the other end,” Edina coach Curt Giles said about the Hornets’ successful game plan. “We wanted to put pressure on them as much as we possibly could, get them to work as hard as they possibly could just to make the long trip into the offensive zone.”

With Lakeville North’s double overtime victory over Eden Prairie, the Hornets will face the Panthers in the Class AA state championship tomorrow night. With the way these two teams played tonight, I don’t think there is any doubt they are the two best teams in AA this season, which should make for an outstanding final game.