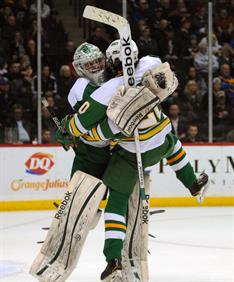 Championship Saturday has arrived at the Minnesota State High School Hockey Tournament and, while there is no doubt it brings with it the pinnacle contest of a season born in November, it is often rivaled by the spectacle that is semifinal Friday night.

2013 will go down as one of those seasons after a pair of games in which teams trailed 1-0 after 34 minutes before staging dramatic third-period rallies to propel themselves into the title game.

Saturday’s Class AA state championship game will serve as a St. Patrick’s Day prequel of sorts as the Xcel Energy Center is transformed into a sea of green and white with Edina facing Hill-Murray in a rematch of the 2008 title game. The Pioneers defeated Edina 3-0 that year to capture their third state championship in school history.

Goals by Miguel Fiddler, Tyler Nanne, and Andy Jordahl in the first 12 minutes of the final period in the early game lifted Edina over Duluth East 3-2 giving the Hornets a shot at an eighth state championship.

Edina put its speed and size to good use in battering the Greyhounds with a punishing forecheck which, ultimately, took its toll on Duluth East.

“When we were down 1-0 we never thought that we were going to lose,” Edina assistant coach Dave Langevin said. “We just knew that eventually somebody was going to step up and make the play for us to win.

“I knew once we tied the game, it was over.”

The Pioneers, meanwhile, scored twice in the final eight minutes on goals by Davis Zarembinski and Ryan Black to stun Wayzata 2-1 and advance for an opportunity at a fourth state title.

“What’s nice is we’re having different heroes on different days,” Lechner said. “Since playoffs started, there’s different guys sitting at this table every night and that’s pretty neat and that’s what it takes this time of year.”

Zarembinski, a sophomore defenseman, did not register a goal in the regular season but has now tallied four times in the postseason, including Hill Murray’s lone goal in its 1-0 section 4AA final win over White Bear Lake last week.

“I just thought initially ‘get the puck to the net; I’ve got Joey Anderson, Willy Brown and Tyler Funk crashing to that net and, hopefully, a rebound just pops out right to them’,” Zarembinski said of his shot from near the top of the left circle. “I just shot it low because [Wayzata goaltender Aaron Dingmann] was up and he couldn’t see anything.”

Lechner said he was asked on television after the game what he told his team heading into the third period down by a goal. The veteran coach said he told his team nothing, instead he turned things over to his seniors, like Black, who said the primary message was simply not to quit.

“We wanted to just keep going, plugging away and getting shots on Dingmann,” Black said. “We told our guys to keep peppering them with shots and one is going to go in.”

And one did go in for Black who was carrying the puck away from the Wayzata net before spinning and firing from the top of the circles to earn Hill-Murray a date with its color-scheme cousins from the other side of the Mississippi River.

“We respect all the teams but Curt Giles is a special coach and a good friend,” Lechner said. “He runs a great program at Edina and you’re going to expect to see pretty similar teams—same colors—and they’re the complete package.

Great enough to top semifinal Friday? With two of the state’s best-coached teams and a pair of battle-tested rosters on the world’s grandest high school hockey stage, all of the elements are there to do just that.