Edina puts Hill-Murray loss behind them to earn third place 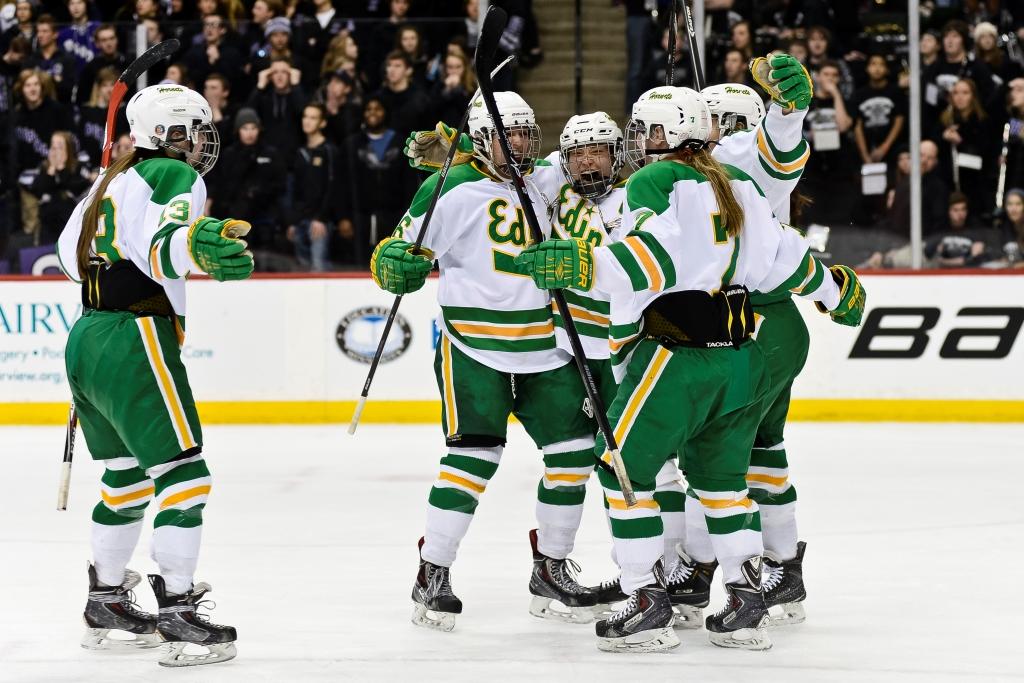 After a 3-1 win over Lakeville South, Edina is celebrating capturing a Class 2A girls’ third-place title. (MHM Photo /Tim Kolehmainen)

Edina puts Hill-Murray loss behind them to earn third place

SAINT PAUL – After heartbreaking 2-1 loss to Hill-Murray the night before, Edina coach Laura Slominski wasn’t quite sure how her team would respond this morning. But she was proud of what she found out about her players’ resolve.

Much to their coach’s delight, the Hornets bounced back from their semifinal defeat to skate away with a third-place trophy after a 3-1 win over Lakeville South on Saturday afternoon at Xcel Energy Center.

Freshman forward Emily Oden’s 5-on-3 power-play goal 4:25 into the third period was the difference in a tight-checking affair which saw the Cougars outshoot the Hornets 17-14. Senior Taylor Williamson scored twice, including an empty netter, to notch her 39th and 40th goals of the season.

“We had a conversation last night about how you kind of can grieve the loss but we wanted to wake up this morning and just have that energy to us,” Slominski said. “The first time I saw our team this morning I was so impressed and that just goes back to our senior leadership.

“Ultimately, you’re playing for third place in the state of Minnesota and that’s a pretty big deal.”

Williamson, a vital cog to the senior leadership Slominski alluded to, spoke with tear-filled eyes about her teammates after the game.

“It was so much fun to just come together again for one more win and just give it everything we had,” Williamson said. “This team is more special than any other team I’ve gotten to play with. We are so close, we are just a family, and to us it was really just leaving everything that we could on that ice today.”

Williamson got the Hornets on the board, tying the game at 1-1 at 12:46 of the second period firing a shot from the high slot past Lakeville south goalie Chloe Crosby.

“She’s obviously been a star for us for years and this year she stepped up her game even more,” Slominski said. “We wouldn’t have been in this tournament had it not been for her, not just because of the on-ice stuff she brings, but because of the leader that she is.”

Williamson praised the Cougars’ defensive effort while also saying she actually enjoyed playing in a game in which every square inch of ice was so tightly contested.

“They had some amazing players out there and they’re very strong on their sticks,” Williamson said. “It’s really fun just to get to play in games that really challenges you like that.”

Lakeville South opened the scoring at 5:52 of the second period on a goal by Morgan Morse, her 33rd of the season and fifth of the tournament. Morse’s five goals accounted for the Cougars’ entire goal -scoring output in their three games in St. Paul.

“I think our biggest frustration is, if you look at all three games, we outshot our opponents and most possession was in their end,” Lakeville South coach Natalie Darwitz said. “We just don’t have the skill the other team has to bury them.

“If we said going into this tournament only one person’s going to score our goals … you’re not betting on Lakeville South then, are you?”