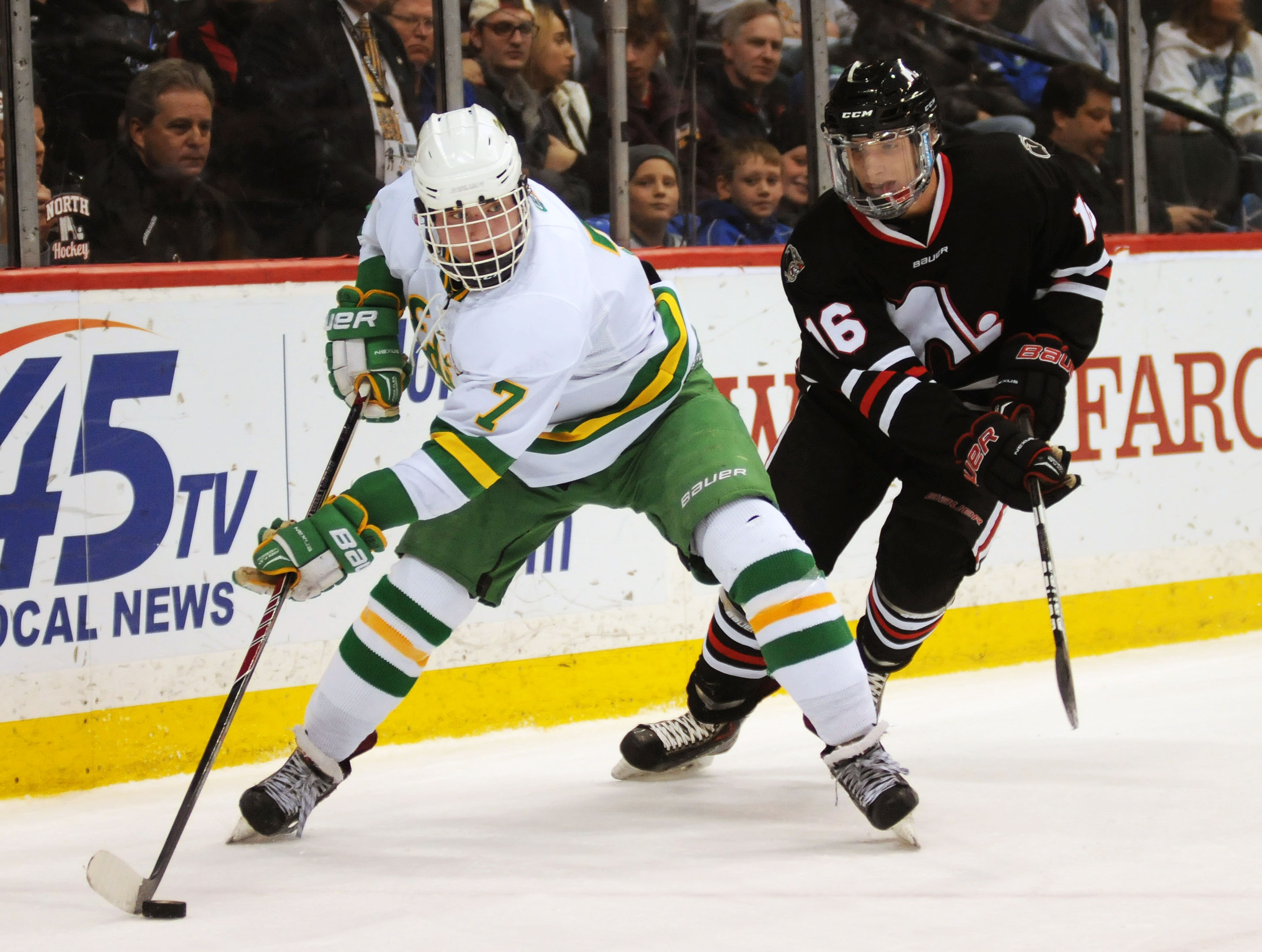 Keiffer Bellows scored twice and added an assist in as the Edina Hornets earned their second straight Class AA title with an 8-2 win over Lakeville North. (MHM Photo / Jordan Doffing)

SAINT PAUL—The 2013/14 regular season was one in which the boys’ Class AA rankings featured a carousel of teams in the top spot with no one seemingly willing or able to carry the baton and run with it. The state tournament, however, was a much different story as top-seeded Edina not only grabbed the baton, they ran away with it.

The Hornets dominated the tournament from the opening puck drop in Thursday’s quarterfinal to the final horn in Saturday’s 8-2 win over No. 2 seed Lakeville North at Xcel Energy Center. Neither Stillwater, Eagan nor the Panthers could slow the speedy Hornets over the weekend as they cruised to their second straight state championship.

Lakeville North entered the game coming off two emotional overtime wins, the second one going to two extra sessions and finishing just seconds short of two full games. Panthers’ coach Trent Eigner said he knew his team had its work cut out for it against the Hornets after back-to-back mentally and physically taxing battles.

“The emotional part of that is sometimes a tougher nut to crack,” he said. “If you’re not mentally prepared for a team like that, it can be a challenge all night long.”

Tyler Nanne opened the tournament with four goals and capped it with four assists while Kieffer Bellows and Miquel Fiddler each scored twice and added assists to their three-point efforts. Max Johnson scored both Lakeville North goals

“It’s unfortunate because I don’t think we played very well,” Eigner said. “That’s a great hockey team that beat us tonight but we kind of got out of sorts early on in the game and they have a tendency to do that to teams.

“Some people say that green and gold jersey is worth a goal.”

Nanne said the title run began in November when Giles and his staff chose the team adding they “didn’t miss one bit” in their roster selections.

“Everyone they picked deserved to be on the team and contributed,” Nanne said. “It was just 20 brothers pitching in to win a state championship and that’s what they did.”

The Hornets made habit of scoring early throughout the tournament with goals at the 54 second and 1:52 marks in wins over Stillwater and Eagan. The championship game was no exception as Edina seized a 1-0 lead just 2:09 after the opening faceoff.

Garrett Wait received a Tyler Nanne pass and drove toward the Lakeville net from the left side, selling Lakeville North goaltender Jake Oettinger on a five-hole shot. The Panther’s freshman goaltender bought it before Wait slid the puck to the net-crashing Casey Dombach who tapped it into a wide open net.

Giles said the early-game success is about nothing more than his team getting its ‘game’ on the ice as quickly as possible.

“What we really want to do is make sure they’re prepared for the start,” Giles said. “We try to give them an opportunity and a thought process to get off to a good start and be successful, but you’ve got to have good players to do that.”

Lakeville North was held without a shot for the game’s first 9:01 but the Panthers’ first puck on goal weakened the seal on the Edina net and they got on the board two shots and 34 seconds later when Johnson pounced on a rebound near the left post to tie the game at 1-1.

The rest of the period was a case of every action having an equal and opposite reaction as Edina answered just 33 seconds later on a Ben Foley goal. When the Hornets’ Miquel Fidler scored his first of the tournament at 13:16, the Panthers roared back 1:20 later courtesy of Johnson’s second goal and Edina led 3-2 after one.

Edina restored its two-goal lead at 5:36 of the second when Malmquist carried the puck behind the Lakeville North net before stopping, spinning and whipping a pass against the grain to Fidler who caught Oettinger cheating off the left post for his second of the game.

The Hornets scored twice in a 1:50 span early in the period’s second half beginning when Parker Mismash was struck in the back with Jack McNeely’s breakout pass. Mismash turned around, located the puck and blew a wrist shot past Oettinger. Shortly thereafter Kieffer Bellows deflected an Alec Oesterreich pass bar-down on a rush and Edina had a commanding 6-2 cushion.

The Panthers received an opportunity to play themselves back into the game when Edina’s Tyler Nanne was charged with a major penalty for boarding at 16:12 of the second. But Lakeville North was unable to capitalize on the five-minute man advantage and only mustered four shots in the final period when Bellows and Cullen Munson rounded out the scoring.

In winning three of the past five state championships, the Hornets now have 12 titles in 30 appearances to their credit when Edina East’s three wins in five tries are factored in. In comparison, the Panthers were seeking their first title in eight trips to St. Paul, including three attempts prior to the formation of Lakeville South.

Eigner pointed out the obvious, however, that each of those Edina teams consisted of a different mix of players, but added the Hornets are clearly extremely comfortable in the state tournament environment.

“Guys who come up are playing with guys who’ve played (in the tournament) two times and had success, and that breeds more success,” Eigner said. “Ultimately, you’re going to have to play a heck of a hockey game to beat them in our first kick at the can.”

Giles said it’s not winning state championships that he enjoys the most, it’s working with the players which brings him the most satisfaction.