Colby In The Clutch 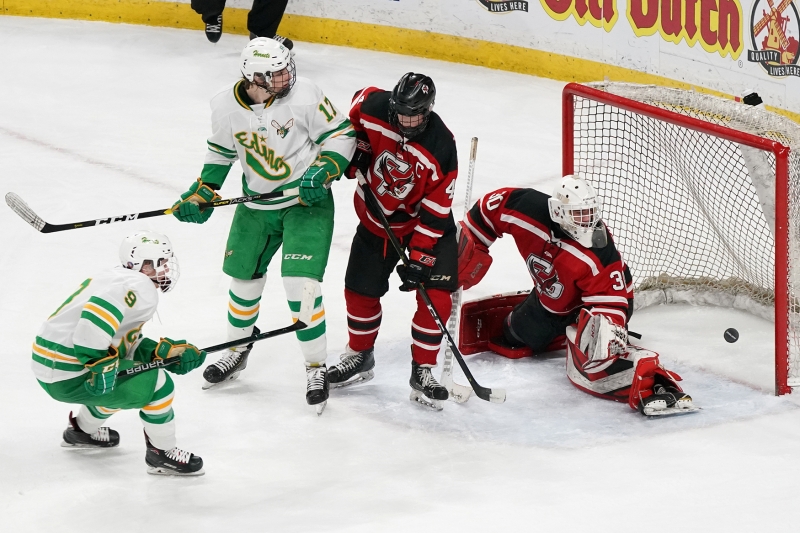 Edina’s Peter Colby watches his shot elude Eden Prairie goaltender Axel Rosenlund in overtime to give the Hornets a 3-2 win over the Eagles in the Class 2A state championship game on Saturday Night at Xcel Energy Center. (MHM Photo / Rick Olson)

St. Paul — Peter Colby finished his 2018-19 season with just nine goals but the Edina senior sure knows how to celebrate. It helps when you have a role model in that regard.

“Patrick Kane’s my favorite player and he does a heartbreaker so I kind of like that,” Colby said as his coach Curt Giles shook his head in disgust.

Colby scored his team’s Class 2A state-tournament-winning goal 2:31 into overtime to lift the Hornets to a 3-2 win over Eden Prairie on Saturday night at Xcel Energy Center. As soon as the puck hit the back of the net, Colby did a 180-degree turn and raced toward the other end of the rink, dropping to his knees at the far blue line and sliding to the end boards where his teammates greeted him.

Giles, who scored 43 goals in 14 NHL seasons with the Minnesota North Stars, New York Rangers and St. Louis Blues, was asked what his go-to celebration was.

“I didn’t score enough goals to celebrate,” Giles said, eliciting laughter from the media on hand. “My biggest thing was to get back on the line so, yeah, I don’t know if I ever thought about a celebration.

“You guys think this job’s easy don’t you.”

Nothing was easy about Edina’s 1oth state championship — 13th if you count Edina East’s three titles — as the Hornets struggled against the Eagles for two-plus periods before goals by Kevin Delaney and Colby 22 seconds apart transformed a 1-0 deficit into a 2-1 lead just short of the six-minute mark of the third period.

The goals were scored on Edina’s 12th and 13th shots of the night after Eden Prairie smothered the Hornets for two periods to the tune of a 26-7 shot advantage, including surrendering just two Edina shots in the second.

“The biggest thing was the first two periods we were flat,” Giles said. “We didn’t have a lot of get up and go, we kind of sat back a little bit and let Eden Prairie take it to us. Eden Prairie’s way too good of a team to do that. It set us back in our heels and we had to depend on our goaltender to keep us in the game.”

Edina sophomore goaltender Louden Hogg was spectacular in the crease for the Hornets, making save after save to preserve the one-goal deficit long enough for his teammates to mount a comeback.

“Going into it, you know, it was a team that we played against and we have given them a much of a run because they don’t have any holes in their lineup,” Eden Prairie coach Lee Smith said. “But our kids really played with courage and heart tonight.”

Eden Prairie, which had dropped three games to Edina already this season by lopsided scores, employed an aggressive, in-your-face game plan rather than sit back and wait patiently for opportunities.

“Well we tried that and that was pretty much a disaster,” Smith said. “So our best plan was to go with how we finished the season which was aggressive all over the rink.”

Trailing 2-1 near the midway point of the third period, the Eagles got the equalizer when senior defenseman Clayton Schultz pounced on a loose puck in the Edina crease and buried his second goal of the season and second of the tournament.

“I pictured this coming as a kid, playing in front of this many people, and for it to actually happen is pretty surreal,” Schultz said.

Colby went into overtime with confidence thanks to a voice in his head which turned out to be prophetic.

“Our manager (Student Manager Jack Goetzmann) in the locker room going into the third he told me, he said, “You’re going to be the one,’” Colby said