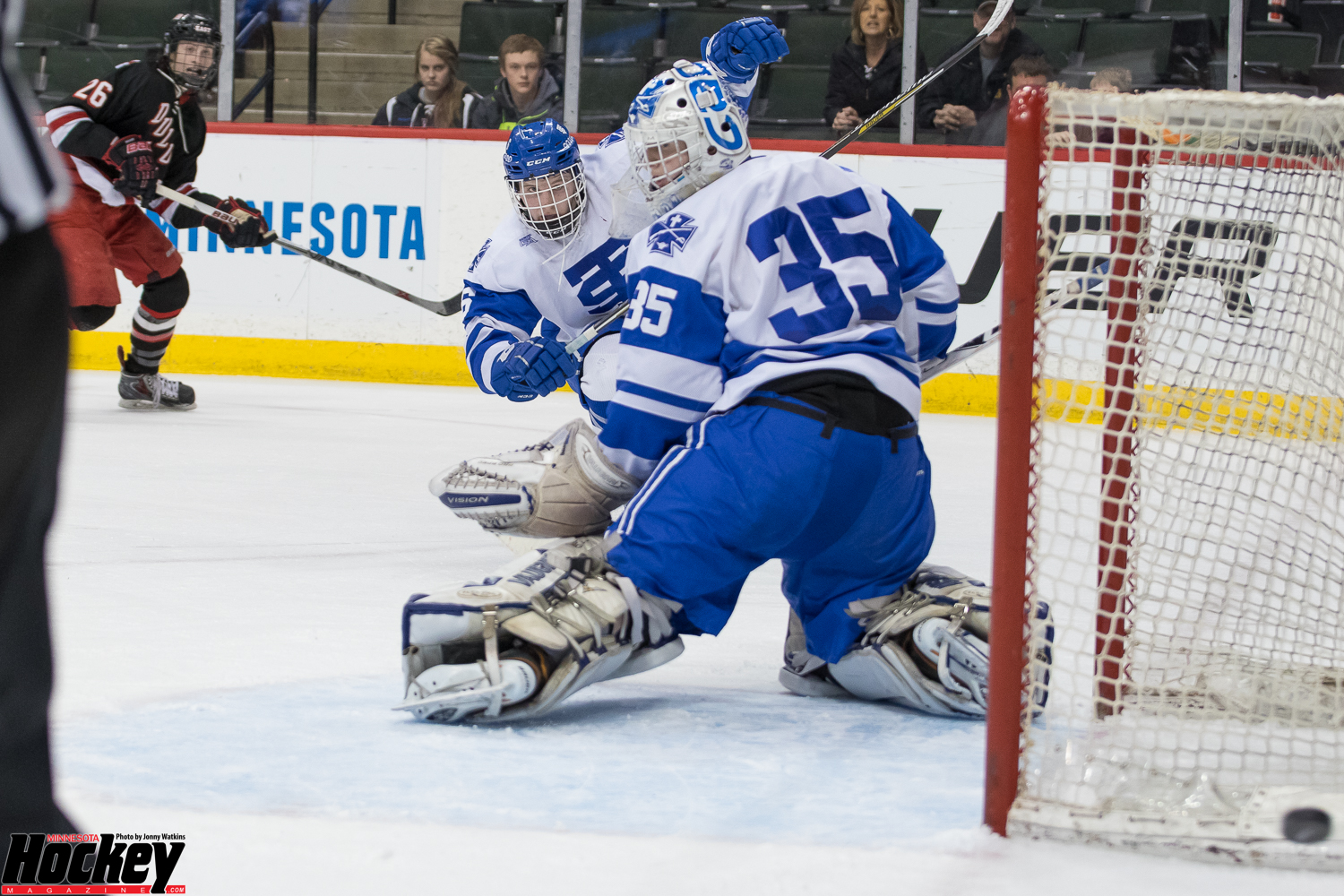 St. Thomas Academy goaltender Matt Snow looks behind him as Ryan Peterson’s (not pictured) shot goes in to give the Greyhounds a 6-5 overtime win over the Cadets in their Class 2A state quarterfinal game on Thursday at Xcel Energy Center. (MHM Photo / Jonathan Watkins)
Duluth East rallies from three down, stuns St. Thomas Academy in OT

A week after defeating No. 6 ranked Elk River in the Section 7AA final, the Greyhounds defeated the No. 4 ranked St. Thomas Academy Cadets 6-5 in overtime, Thursday, in the Class 2A boys’ hockey quarterfinals. Random draw Duluth East will face the No. 2 seeded Edina Hornets in the state semifinals on Friday at 6 pm at the Xcel Energy Center.

While heavily favored coming into the game, the Cadets were the underdog heading into overtime. Playing in their tenth overtime period of the season, Duluth East carried the experience and the momentum, having scored two goals in the final three minutes of regulation to tie it.

And this momentum ultimately provided the Greyhounds with the overtime-winner from junior forward Ryan Peterson.

“We had momentum in the zone,” Peterson said. “We were throwing pucks on net all night. One fell right in front, I got a stick on it, and lucky the puck went in.”

But that momentum wasn’t there to begin with.

Early in the game, the Greyhounds found themselves down 3-0 following goals by Brian Hurley, Danny Weihrauch and Peter Tufto.

Momentum constantly shifted sides all game. After the Cadets jumped out to a three-goal lead with less than seven minutes left in the first period, Duluth East went into the locker room only down 3-2 after two goals in the final 90 seconds.

But Mr. Hockey Finalist Peter Tufto continued to lead the offensive charge for St. Thomas Academy. The senior forward, who scored two goals and had three assists, gave his team a 5-2 lead entering the third period.

While this lead lasted for most of the period, the final three minutes made the difference. Alex Broetzman headed to the box 13:17 into the third period and Evan Little took advantage, narrowing the gap to 5-4.

The momentum took a full and complete swing to Duluth East when senior forward Nick Funk buried the puck past Cadet goaltender Matt Snow, with 1:56 left in regulation.

The up-and-down game could have flustered the Greyhounds, but captain Brian Bunten made sure that his teammates stayed the course through adversity.

“After each [Cadet] goal or mistake, we just kept saying, ‘keep believing, keep believing, and keep working hard and stick to the system, it will work.’” Bunten said.

Sticking to the system worked well for Duluth East as Peterson shot the puck into the St. Thomas Academy net, sending his team onto the state semifinal. Puck possession wasn’t frequent for the Greyhounds in the victory, but Randolph’s squad has learned to adjust.

“We have had to learn how to play without the puck,” Randolph said. “We didn’t have the puck much. Elk River had the puck all night and Edina will have the puck tomorrow night. All that matters is that we’re playing at 6 pm, not 10 am.”