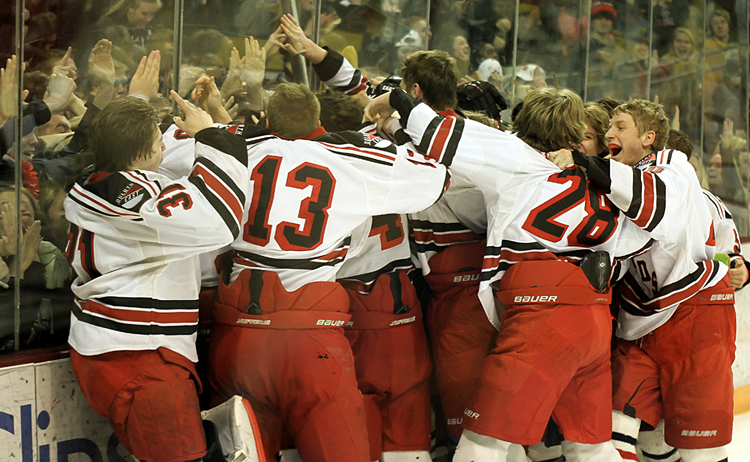 DULUTH—To say that the ending to Duluth East and Elk River’s Section 7AA final at AMSOIL Arena was exciting is an understatement to say the least.

Just as it seemed like the Elks were on their way to the state tournament for the first time since 2005, Duluth East’s Alex Spencer roofed a shot with 2:10 left to tie the game 2-2 and send it to overtime.

Nick Altmann made sure his team’s late surge was not had in vain as he chipped a puck through Elk River goaltender Mac Berglove’s five hole just over two minutes into extra time to get his team to its sixth straight state tournament.

“This means a whole lot, it hasn’t really sunk in yet,” said head coach Mike Randolph. “It just shows the character of these kids and how far they’ve come. They just have no quit in them. The bench never got down, we struggled for two periods and came out in the third and played great.”

The first period saw mostly conservative play from both sides, with neither team looking to take too big of a risk early.

The second period, however, was a different story.

Elk River split the game wide open with an early goal by Reggie Lutz as he potted a rebound that ricocheted wide off of a Chase Springman shot from the opposite circle. That goal not only served to get Elk River on the board, but also woke up a reserved Greyhounds offense.

After plenty of quality chances by the Duluth East, a shot finally made its way between the pipes for the Greyhounds with less than five minutes to go in period. Berglove made a couple of sprawling saves but could not control the puck and Duluth East’s Bryton Lutzka converted a second rebound to knot the game at 1-1.

The Elks were not prepared to go into the locker room at period’s end without the lead however. It only took Jake Jaremko, the Greyhound’s leading postseason scorer, 14 seconds to snipe a shot from the slot over the shoulder of Duluth East’s Gunnar Howg to regain the one-goal lead.

The third period saw plenty of chances for the Greyhounds, including a couple of quality shots on an odd man rush by Nick Altmann and Jack Kolar, but Elk River’s Berglove stood strong between the pipes.

“Our last two games have given us some confidence that we can score against any goalie because those kids were really good too,” said Randolph. “We had to find a way to beat him. I don’t know where it went, and I don’t care where it went. I’m just glad it went in.”