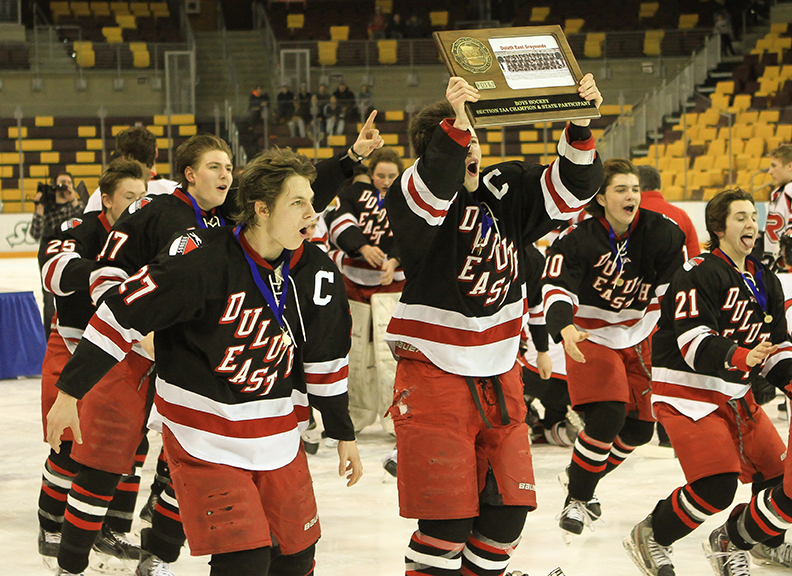 DULUTH – In a game that featured clanked pipes, pucks cleared off the goal-line and plenty of sprawling saves by both goaltenders , it only made sense that the Section 7AA title game would come down to a double-overtime goal.

That’s when Duluth East forward Garret Worth proved his worth to the Greyhounds. The ninth-grader’s ninth tally of the season at 1:49 of the second overtime propelled Duluth East to a come-from-behind, 5-4 win over top-seed Elk River at Amsoil Arena in Duluth.

The victory was even more impressive considering Duluth East (14-10-4) fought back from a 3-0 deficit after one period to make their seventh straight trip to the State Tournament and 22nd appearance overall.

Elk River started fast behind forward Jacob Jaremko, who scored his 24th goal of the second just 48 seconds into the opening period from Reggie Lutz and Matt Kiersted for a 1-0 advantage.

The Elks went on to add Jax Murray’s 17th tally of the year at 7:23 from Benton Maass and Peter Jones before Jaremko added his second goal of the evening at 15:52 on helpers from Lutz and Kiersted for a 3-0 Elk River bulge after one.

“We told our guys they were playing just fine” said Duluth East coach Mike Randolph of his first intermission locker room talk. “We knew we weren’t going to shut them out, so we emphasized just sticking to our systems and playing our game.”

The Greyhounds responded in the second period, taking advantage of a five-minute major to score twice in a span of 1:45 and cut the deficit to 3-2.

Ash Altmann got the scoring started for Duluth East, tallying on a nifty forward-to-backhand move for his 10th goal of the season on assists from Luke Dow and Shay Donovan to make it a 3-1 contest. Nick Altmann then brought the Greyhounds to within 3-2 on a wrist shot that deflected off Elk River goal tender Ben Meyers and underneath the crossbar for his 14th goal of the year at 7:54.

Duluth East evened matters 3-3 when Nick Funk put home a rebound for his third tally of the year at 13:03 before Elk River struck back with Reggie Lutz’s 40th goal of the season at 14:42, allowing the Elks to take a 4-3 lead into the second intermission.

The Greyhounds again rallied however, this time getting the tying goal when Ryan Peterson took a puck off the near-side boards before lifting a shot into the upper-right corner for his eighth tally of the year at 12:44 of the third, sending the game to overtime knotted 4-4.

Following a scoreless first overtime, the Greyhounds finally got the game-winner from Worth, who poked home a feed from Nathaniel Benson to send Duluth East back to the State Tournament.

“I saw (Benson) send it towards the goal, so I just went to the net,” said Worth. “I wasn’t sure if it went in, but I saw the red light and everybody started celebrating, so that’s when I knew I had scored. It was an incredible feeling.”

Gunnar Howg picked up the win in goal for Duluth East, stopping 25 of 29 shots for the game.

Meyers meanwhile stopped 27 of 32 shots for Elk River, which finishes the season 22-5-1.