How many kids quit because of checking? 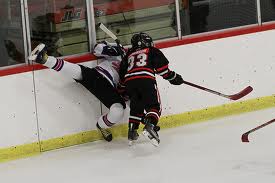 There is an increasing debate raging on whether or not checking should be allowed pre puberty in ice hockey as well as tackling in Pop Warner football. In New York State Legislation has been introduced that would eliminate all tackle football before the age of 11. In Canada checking in hockey is being eliminated pre puberty.

Let’s examine the problem and why this has become an issue.

“TBIsaccount for an estimated 1.6 million to 3.8 million sports injuries every year, with approximately 300,000 of those being diagnosed among young, nonprofessional athletes.”

Increased knowledge about concussions and their long term effect on children is being researched, developed, and brought out to the public in an increasing variety of ways. There are concussion tests that start with a baseline before the child plays. There is a blood test that measures protein. Voice recognition is now coming to the forefront as another way to examine and treat this problem.

My own personal experience comes into play here. I have had 8 concussions total. The last two occurred within one week at Clarkson University while playing hockey and ended my playing career. The effects still haunt me today.

Two years ago, my wife decided to decorate our Christmas tree with a special treat for the kids. I was out making a speech and when I got home it hit me like a ton of bricks. She had bought blueberry candy canes, as an innocuous tree ornament. The first whiff of this started to give me a headache. Then my eyes started to water and my vision started to blur. When I tried to talk to her about this my words were slurred. It got to the point in just a matter of minutes that I could not speak and could not see. She led me upstairs to the bedroom and closed all the shades and put a hand cloth over my eyes. My wife then went downstairs and threw out the candy canes, opened all the windows and turned on the heat.

It took 4 hours before I returned to normal.

People can argue all they want about the need to have kids learn checking and tackling early on in both football and hockey to toughen up the children, but it does not trump the health issue. Since we have a hard enough time getting trained coaches to teach these techniques, I believe that delaying contact until after puberty is a sound health solution.

It has been presented to me that the children will fall behind or become “wussys.”

If all contact is eliminated then no one will fall behind and no one will get an advantage. In Canada they conducted an experiment with one team of 12 year olds played with contact and another didn’t. No difference in development. Why? Because skill is still the most important physical aspect for any child to learn in youth sports.

How many passes are made in a hockey game compared to checks thrown? How many shots taken? In football, how many kids quit playing because they don’t want to get continually clobbered every practice and game? Do we not have a responsibility to keep them active? Mentally, as always, it’s about having fun, so the child can relax and play with confidence. Am I to believe that children playing pickup games with no contact are not developing? Watch my videos and you will see where professional and college athletes and coaches say pick up games are fun and competitive, without contact.

Since there are many cases of kids and parents going over board when hitting is involved then eliminating that aspect of youth sports is another way to ramp down the angst at youth sports events. Some kids will want to go to next level and start contact and that’s great. I’m all for it. No parent that I have seen at a youth sports event goes nuts over a great pass, a fantastic run, or a beautiful goal.

Lastly let me remind you that 3.5 million children went to the hospital last year with over use injuries. If you don’t think the insurance companies are not going to see this and come up with a way to stop all the payments and keep people healthy you really haven’t been paying attention closely to the health situation in America where 30% of all children born after the year 2000 are headed for Type II diabetes.

Also, obesity has quadrupled over the last 30 years.

Let the children PLAY FOR FUN and be safe.