How(e) To Turn a Program Around 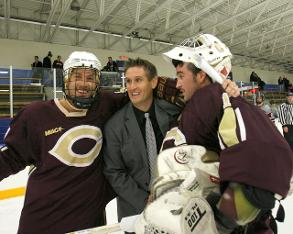 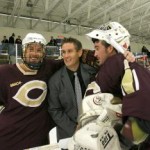 Featured Image:
The Cobbers opened the season with a perfect 2-0 mark in this year’s MIAC Showcase.
Photo: Ryan Coleman for d3photography.com

Upon arriving at Concordia-Moorhead in 2008, head coach Chris Howe knew he had a huge challenge in front of him. The men’s hockey team had just one win the year before he arrived and losing had become the expectation. What Howe had to do was no small task as he was forced to try to change mentality of an entire program

“The biggest thing was getting the players and the people involved in the program to believe that it doesn’t have to be how it was before,” said Howe.

Before Howe was hired by Concordia, he was an assistant coach at Saint John’s University where he served under John Harrington, a prominent player and coach in hockey circles — especiallly in Minnesota.  The five years Howe spent with Harrington on the Johnnies’ bench proved to be instrumental.

“He is still a huge influence in my life. The opportunity to coach with him was a huge honor, I was very fortunate to work with him,” said Howe.  “He taught me about honoring my word, hard work, being accountable, and what it takes to win.”

And the fact that Harrington was a member of the historic 1980 gold-medal winning U.S. Olympic Team helped instill a belief in Howe that, as he explained, there is no such thing as something that’s impossible and there is nothing you can’t obtain if you’re willing to do the work and honor your word.

The lessons learned under Harrington were put to the test as Howe went from an established winning program to Concordia, a program that had not even had a winning season since 2002-2003. The challenge ahead of him was enormous, but Howe relished this fact rather than feared it.

“They had a history here of being pretty good, so we decided we were going to bring Concordia hockey back,” Howe said.  “It then became about integrity, are you going to get up every day and work to do what you said you were going to do? It’s tough, but it’s fun. That’s how you stretch and grow, taking on a challenge.”

The first thing Howe had to do to properly take on this challenge was assemble a coaching staff that shared the same vision. Howe brought in Ross Richards and Scott Bjorklund, and has since added Erick Galt to the staff.  Galt, a 2012 graduate of Concordia, was an All-American defenseman during his time with the Cobbers.

Next, and perhaps most important of all,  Howe had to get the players to buy in.

“I had to remind the players [in the first few years] that there wouldn’t be instant gratification, that they were laying the foundation. I made it clear that they may not see the fruits of their labor until five years past their time,” said Howe.

But buy in they did, and that is something Howe has not lost sight of.  After preaching early on that in order to build a successful program one has to practice what they preach, the fact the players accepted the responsibility required of them resonates with the program to this day.

“We tip our hat and we honor those players before who gave everything they had to something new,” Howe said.  [They are the ones who laid the] foundation of hard work, accountability, and winning and we need to honor those things every day. On each practice plan ‘hard work, accountability and winning’ are on top of the page; that keeps us present and reminds us of what we are trying to accomplish.”

Howe then had to begin recruiting the kind of players he needed to turn things around and he wanted players who were interested in being part of something that is much bigger than themselves. To find this kind of player, Howe talks to junior and high school coaches to identify players that are selfless and willing to sacrifice for something unknown. As Howe explained it, these kind of players are not always the leading scorers but finding them is essential because if they are asked to work as hard as Howe and his staff expects them to, they need those traits.

While those traits are all highly desirable, Howe is well aware of the fact that the players must also come with a certain skill set, and as the culture in Moorhead slowly started to change, Howe was able to land more and more of those types of players.

It didn’t take long for Howe’s influence on the program to be felt in the win department. In his first year, 2008-2009, the Cobbers went 3-20-2 (1-13-2) and the next season they didn’t fare much better as they finished 5-15-5 (4-7-5), though they did win three more conference games than the previous season. Then came the third season and that’s when the Cobbers saw drastic improvement.

The Cobbers finished 12-11-4 and earned the third seed in the MIAC playoffs. They made it all the way to MIAC Championship game, losing to the top-seeded Hamline, 5-2. The successful season was just the beginning for the Cobbers as it proved what Coach Howe preached was a formula for success. The next season they finished 10-11-4 (6-7-3), finishing tied for fifth in the conference but missed out on the playoffs by virtue of losing a tiebreak. Last year, they proved that 2010-2011 was not an aberration, but a sign of the new Concordia Cobbers when they went 13-12-1 (10-6) and finished third in the conference for the second time in three years, before losing to eventual playoff champion St. John’s in the semifinals.

The Cobbers entered this season with high expectations and thus far have lived up to them as they currently stand 6-2-0 overall and 3-1-0 in the MIAC, just two points behind league-leading St. Thomas.  Additionally, the Cobbers have already scored wins over defending league champion St. John’s, perennial league contender Gustavus Adolphus, and UW-Superior.

“This is a team that has the pieces and elements,” said Howe. “I hate to compare teams as they are all special to me, but this team has great goaltending, good defense, and depth at forward.”

“[It also] has an element of selflessness that hasn’t been there since [he’s arrived]. That is just an accumulation of everyone who has been here since 2008. It is really inspiring to me to see a group care so much for each other.”

With this group off to a strong start and perhaps primed to have a big season, Howe is making sure that they stay in each moment as much as they possibly can. One of the many mantras of the program is, “this play, next play, right now,” and Howe attempts to make sure the team stays focused on that as part of the larger process.

As Howe works to keep his team focused on the day-to-day, he has bigger plans for the future of the program

“Winning a national championship is the ultimate goal,” said Howe.  “And we are also trying produce young men that go out and really care about influencing others. We want our kids to learn what it takes to become a champion, and then with that influence others to make where we live as people a better place.”