From hurting to a hat trick

Blake returns to the final behind Bullock’s effort 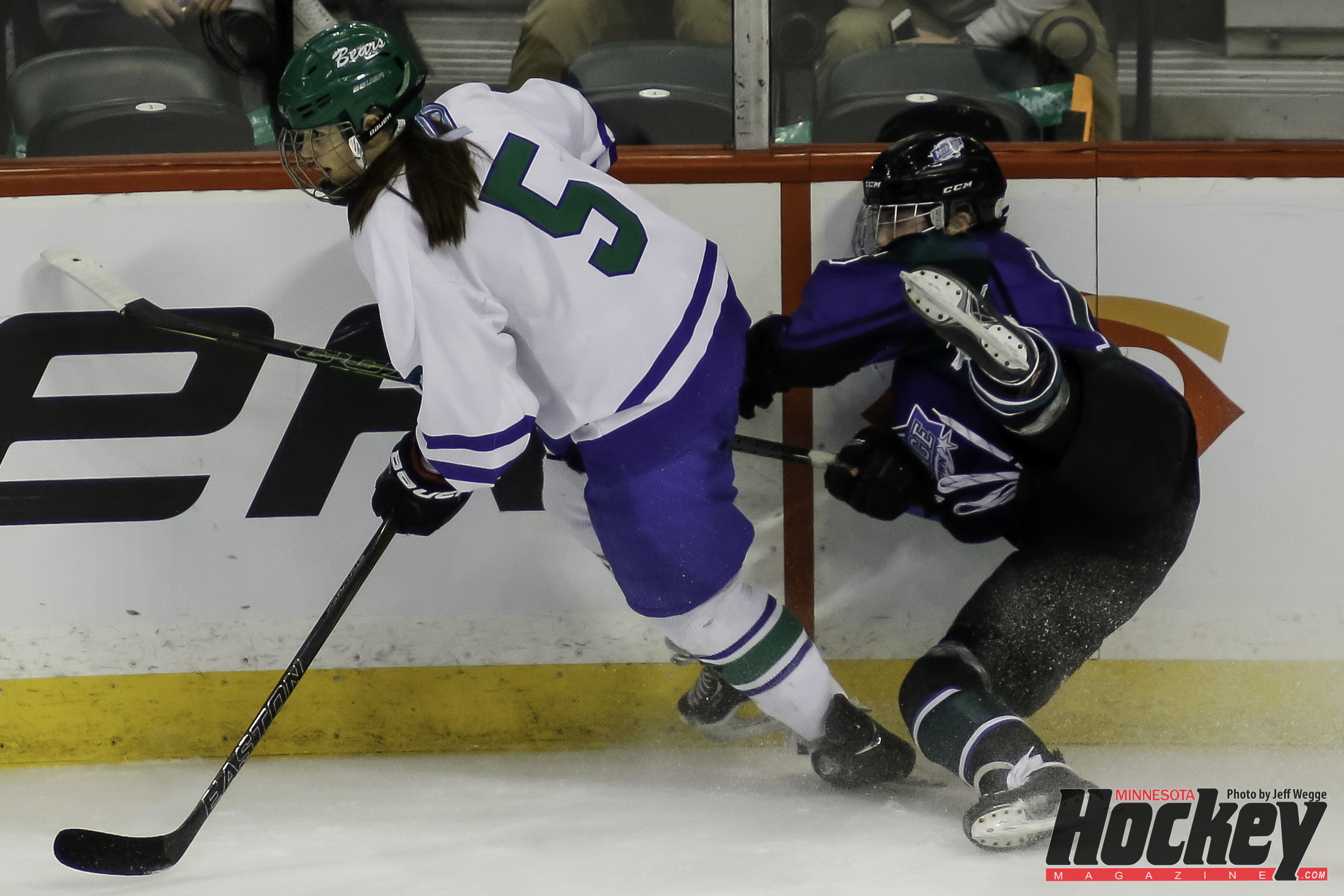 Blake returns to the final behind Bullock’s effort

St. Paul – Carly Bullock went down to the ice and looked to be in pain about seven minutes into the first period. Not a good sign for Blake’s leading scorer.

Right off a faceoff, she caught a stick to the throat.

“The heel of her stick caught me right here,” Bullock said, pointing to her throat. “So I’m a little hoarse. I just couldn’t breathe.”

But she wasn’t down for the count. Bullock returned later in the first period and ended up with a hat trick, giving top-seeded Blake (25-2-2) a 5-1 Class 1A semifinal victory over No. 4 seed Proctor/Hermantown (20-8-1) Friday afternoon at Xcel Energy Center.

The Ms. Hockey finalist has seven goals in the tournament, giving her 59 for the season.

After the game, a hoarse-voiced Bullock talked about using her injury to her advantage.

“It was great,” Bullock said. “Just using the anger of getting hurt, using it in a good way.”

The line combos were shuffled a bit with Bullock out, but coach Shawn Reid wasn’t worried about his star player.

“I will never, ever bet against Carly Bullock,” he said. “I don’t think she’s ever been hurt in her career.”

Don’t be fooled though: Bullock isn’t carrying the team by herself. Seven different Bears have scored in the state tournament.

Blake got on the board first Friday, just 2:12 into the game. Sarah Chute got her stick on a Madeline Wethington shot through traffic from out near the blue line for a power-play goal. It was Chute’s second goal of the tournament, matching her season goal total before state.

Proctor/Hermantown held Blake to that 1-0 lead for the rest of the period and was only outshot 9-3 during that time. Blake had to kill off a couple penalties, including 43 seconds of a 5-on-3 situation.

The second period started with a quick goal as well, this time coming from the Mirage as senior forward Sophie McGovern tied it at 1 after a power play for her team had just expired.

“Definitely that goal kind of got our bench up,” McGovern said.

Any momentum seemed to be erased a couple minutes later as Bullock pumped in her first goal of the game, on a backhanded move off a breakaway.

“You can’t make very many mistakes,”  said Mirage coach Glen Gilderman. “If you make mistakes, they capitalize on them.”

Blake freshman Izzy Daniel brought the lead to two later in the period when she buried a pass in the slot. Bullock gave the Bears a lead extension on the power play with 45.8 seconds left in the second period to make it 4-1.

“I think we calmed down a little bit,” Reid said. “They were just all over us in the first period.”

Bullock sealed the deal only 29 seconds into the third period with a powerful shot from in between the circles to give her the hat trick and her team a comfortable 5-1 lead.

The teams also faced each other Dec. 4, a 1-0 victory for Blake. Proctor/Hermantown used that as motivation.

“We knew that we could play with them,” Gilderman said. “We carried some confidence in knowing that it can be done.”

But Blake outshot the Mirage 13-4 in the third period and 33-13 for the game. The Bears also went 2-for-4 on the power play and have now outshot opponents 93-15 in the tournament.

The Bears are in the hunt for their state-best sixth state title and third in the past four years. They will face No. 3 seed St. Paul United in the Class 1A championship game at 4 p.m. Saturday at Xcel Energy Center.

Proctor/Hermantown will face Warroad for third place at 9 a.m.