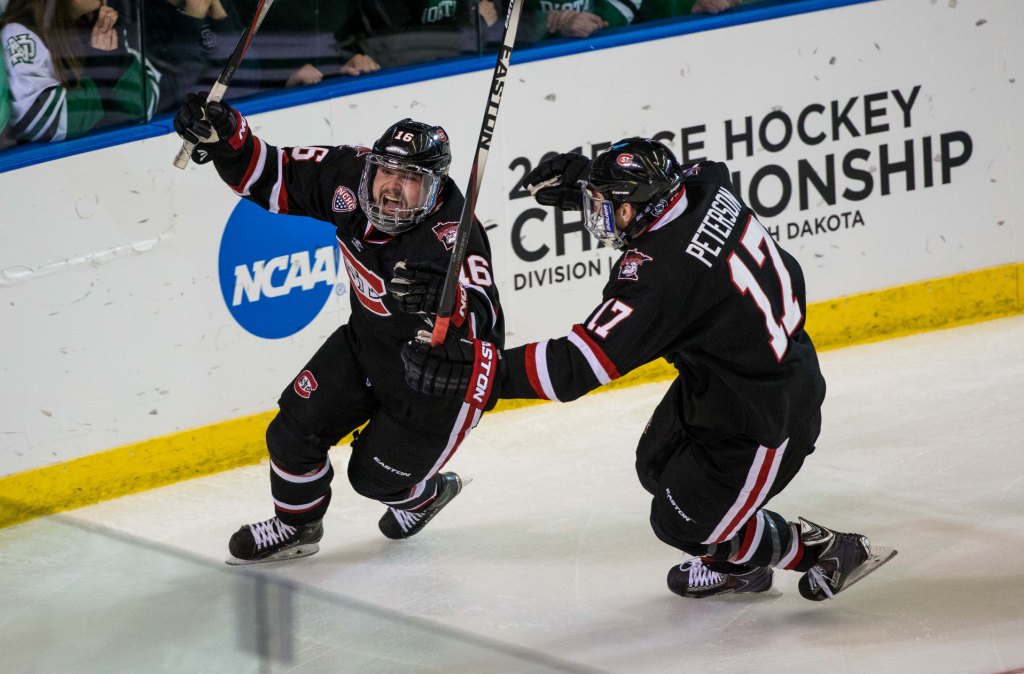 Fargo, N.D. — As difficult as it may have been to advance to the NCAA Frozen Four without the play of Zane McIntyre, North Dakota also got a little assistance from fortunate bounces in front its own net and on the attack.

Whether it was luck or not, UND still had to claw its way to a 4-1 win over St. Cloud State in the NCAA West Regional Final Saturday at SCHEELS Arena.

The bounces were anything but lucky for the Huskies, who finish their season 20-19-1.

“There were a couple of fluke goals, one off our guy’s back, and all of the sudden we’re behind the eight ball,” SCSU coach Bob Motzko said. “It seems to me it’s a game of ifs and buts. It’s frustrating right now because I think we could’ve had a different fate.”

North Dakota advances to play Boston University in the NCAA Frozen Four on April 9 in Boston.

SCSU jumped on the board 89 seconds into the game when Jimmy Murray scored off a faceoff to the left of the UND goal.

“Jimmy broke through that faceoff and got a quick one and that got everyone up on the bench,” SCSU forward Jonny Brodzinski said.

“It was a quick faceoff play,” North Dakota goalie Zane McIntyre said. “It caught me off guard and our team off guard, but resiliency has been in our vocab all year, so it’s no surprise the boys battled up and came back strong.”

SCSU’s lead lasted seven minutes and 30 seconds until Andrew Panzerella scored his first goal of the season when his shot from the point made it through traffic, off the right post and in.

The Huskies turned the puck over in the zone before Panzerella took the shot.

The teams went into the first intermission tied 1-1, but SCSU’s misfortune began to show itself in the next 20 minutes.

Drake Caggiula scored the go-ahead goal for UND at the 6:49 mark of the second period on a puck that deflected in off a St. Cloud State defender and in.

The Huskies had plenty of chances to score in the second period.

Blake Winiecki lifted the puck wide left of the goal and Joey Benik had a point-blank chance that he sent wide right late in the period. McIntyre also made a big save on a Nick Oliver shot.

Luke Johnson added to UND’s lead 2:53 into the third period when he flung a shot toward the goal from the corner in the SCSU zone.

The puck ricocheted off the right post and straight up into the air over the SCSU goal, landed in the crease behind goalie Charlie Lindgren and trickled into the net.

Lindgren finished the game with 22 saves.

UND didn’t allow SCSU to generate much from that point on.

“Typical North Dakota,” Prow said. “They play hard, especially in our zone. They got in on us and put pressure. It was hard for us to get out of the zone.”

McIntyre finished the game with 19 saves and was named Most Outstanding Player of the tournament.

“When we did get to their goaltender tonight, he was awfully strong,” Motzko said. “Not only did he make the saves, he looked good doing it.”