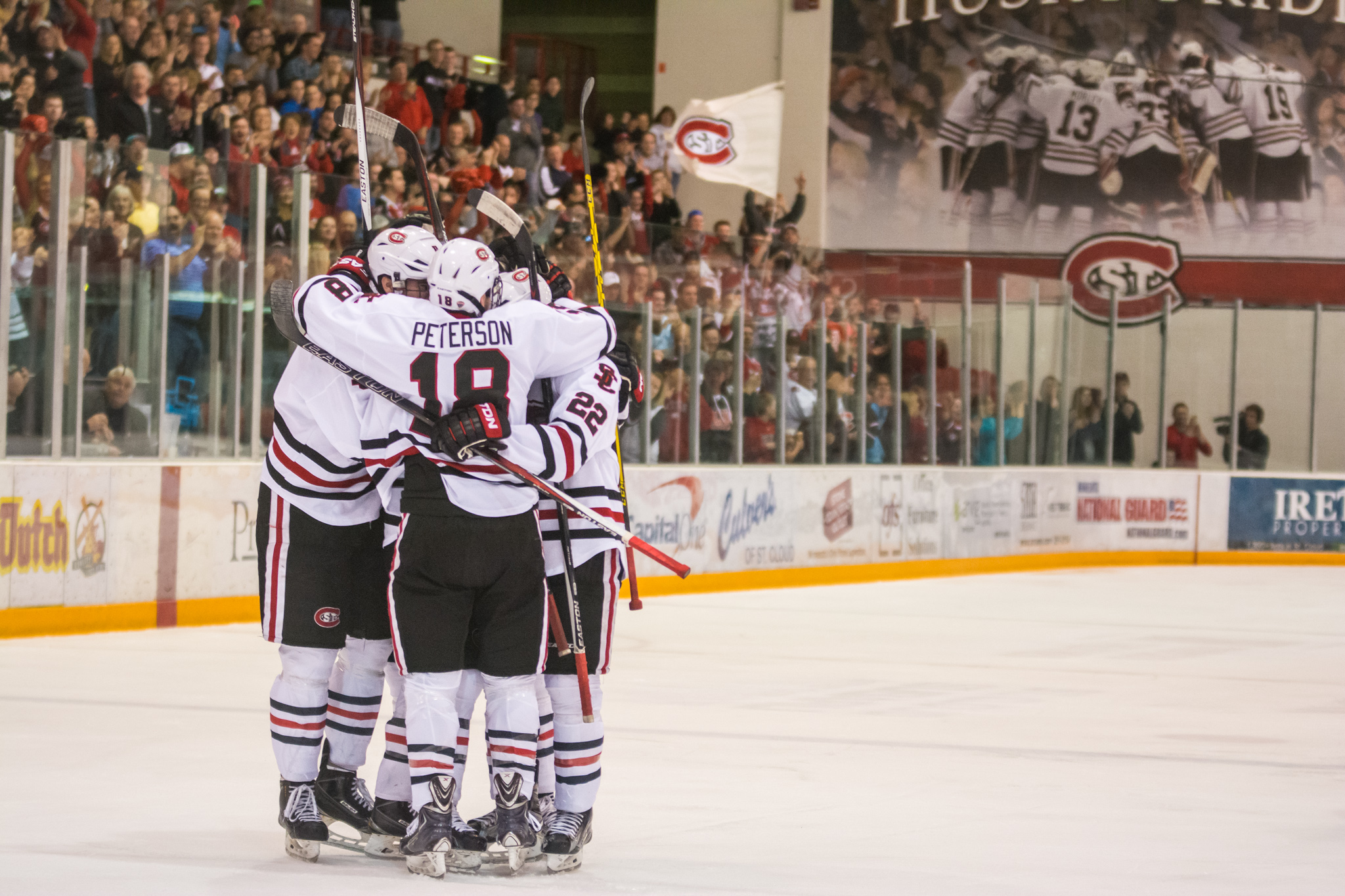 ST. CLOUD – It’s fair to say few people expected anything but a St. Cloud State sweep over seventh-seeded Western Michigan, but in a way, the Huskies bucked a trend they’ve developed this season.

Five of SCSU’s eight losses have come at home in the Herb Brooks National Hockey Center, including two weeks ago on senior weekend, when the Huskies were swept by Minnesota-Duluth.

“The best thing is that we didn’t lose our focus. We didn’t make a big deal about it,” Motzko said. “We bounced back on the road and we bounced back this weekend.

“The worst thing we could’ve done is made a bigger deal about, but we put it behind us and went back to work.”

The Huskies finished off a sweep of Western Michigan with a 4-2 win Saturday at the Brooks Center, bringing SCSU’s winning streak to four games since the home losses to UMD.

SCSU will play the Denver Pioneers in the NCHC Frozen Faceoff at either 4 p.m. or 7:30 p.m. Friday at the Target Center in Minneapolis. The other matchup will feature a hot UMD team trying to knock off top-ranked North Dakota.

One night after the Huskies had to claw out an overtime victory against a Western Michigan team they dominated in the regular season, SCSU blew Game 2 wide open in the second period to finish a sweep of the Broncos.

Trailing by a goal and held off the scoreboard through 30 minutes, Saturday’s game had a similar feel to Game 1, in which Western Michigan had a lead past the halfway point of the second period.

But a flurry of goals by Robby Jackson, Jimmy Schuldt and David Morley in a span of one minute, 48 seconds put SCSU ahead for good.

“Tonight, I thought we did a good job exposing their defensemen,” Morley said. “They’re big, they’re strong, but we knew we had the speed advantage and that helped us get behind their defense.”

SCSU went back-and-forth with the Broncos in Friday’s series opener, leading to a 4-3 win on Patrick Newell’s goal in OT.

The Huskies carried the momentum into Saturday, but for half a game, couldn’t get the puck to carry into the net.

Western Michigan was able to slow Friday’s game down and play its typical defensive style and SCSU dictated the pace Saturday, but Broncos goalie Lukas Hafner was stopping everything the Huskies threw at him.

“We felt we were playing really well through the first period, up until my goal,” Jackson said. “Offensively, we had them on their heels, so we knew it was only a matter of time before we broke through.”

The Huskies finished the season 13-5 at home, but were a lot more impressive on the road or on neutral ice, where they were 16-3-1.

The series win gives a little bit of redemption to SCSU’s senior class, which was honored in a somber postgame ceremony following the Huskies’ second loss to UMD.

“That wasn’t the way we wanted to go out, the way we lost to Duluth,” Morley said. “We knew this weekend was going to be tough.

“Their goalie played lights out, which made it tough for us, but it was nice to get a couple of wins in our last weekend here and we’re excited to get down to Minneapolis.”