Huskies Find Road to the Top 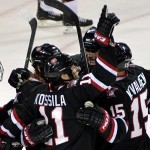 Playing an away game is less than ideal, but St. Cloud State seems to have it down. They focus on “keeping the crowd out of it, and the student section down,” SCSU coach Bob Motzko said. The Huskies were able to continue that trend, extending their road record to 8-0 after sweeping the No. 20 Minnesota-Duluth Bulldogs this past weekend at Amsoil Arena. The wins raised St. Cloud State’s record to 6-1-1 in the NCHC and 11-1-2 overall and elevate the Huskies to the top spot in the U.S. College Hockey Online poll, supplanting Minnesota.

Minnesota-Duluth got off on the right skate and outplayed SCSU for much of Friday night’s series opener, but by the ultimately St. Cloud State stabilized their game and earned a 4-2 victory behind a pair of third period Jonny Brodzinski goals including the game winner with 5:31 remaining.

“We came off the first two periods looking sluggish… But we are a third period team,” Brodzinski said. “We came out third period and played our game.”

Just under six minutes into the first-ever NCHC game hosted by Minnesota-Duluth, junior Caleb Herbert’s goal gave the Bulldogs a 1-0 lead. The first goal energized the 6,394 attendees, the home bench and, as it turns out, the away bench. Wasting little time, Huskies leading scorer, Nic Dowd, scored his ninth goal of the season at 9:10 when he caught Minnesota-Duluth goaltender Matt McNeely out of position to tie the game 1-1.

In the second period UMD junior Justin Crandall drove one to the net to put the Bulldogs back in front at 11:42 with assists from freshman Kyle Osterberg and Herbert. St. Cloud State’s Kalle Kossile came back with a bit of a fluky goal six minutes later when his shot from just inside the blue line eluded McNeely’s glove to make it 2-2 after two periods.

“It doesn’t matter at the end of the period how they got it,” Minnesota-Duluth coach Scott Sandelin said. “It’s basically 0-0 going into the third period; you gotta win a period to win a game,”

But St. Cloud gained control of the game when they were able to get the puck on Brodzinski’s stick. His top-shelf shot at 14:29 snapped the tie and his empty-net goal with 44 seconds to go sealed the Husky win.

Both teams played a hearty game Friday night. Minnesota-Duluth was able to capitalize on their strong defense and shut down St. Cloud for the majority of the game. But Husky goalie Ryan Faragher’s 36 saves ended up being the difference.

Even Motzko admitted, “In my 20-something years of coaching, that was the luckiest win we have ever pulled off.”

Going into Saturday’s rematch, it was difficult to know what to expect after the two teams had already proved to be a tough match for one another the night before. But the Huskies seized control of the game physically in the third period of Friday night’s game and they carried that momentum into Saturday.  It is safe to say the Huskies were able to breakdown the Bulldogs’ play and capitalize on their opportunities to score in cruising to a 5-1 victory.

“[Friday] night we weren’t creating any turnovers or any opportunities to capitalize any mistakes,” Motzko said. “Tonight we were moving our feet, winning more battles and our guys made a good adjustment.”

After defenseman Jimmy Murray pinched in from the blue line to get St. Cloud State on the board at 9:36 of the first, Brooks Bertsch followed up with a rebound shot that got past UMD senior

goalie, Aaron Crandall for what turned out to be the difference-making goal.

Up 2-0 at the end of the 1st period there was no doubt about it, St. Cloud had found the push in their stride they were missing on Friday.

“For us to get the first couple goals was huge, we play much better with the lead,” said David Morley whose goal at the 10-minute mark of the second period extended SCSU’s lead to 3-0. “We were able to gain the momentum and just keep playing our game from there on out.”

The Bulldogs answered just 1:31 after Morley’s goal when Charlie Sampair scored to draw UMD back within two. The goal did little to slow the Huskies’ momentum as St. Cloud’s defense remained strong and they continued to create chances offensively. St. Cloud’s three-goal cushion was restored just 33 seconds before the second intermission when senior Cory Thorson’s goal made it 4-1 heading into the third.

St. Cloud State’s Ryan Papa was able to sneak one last puck past Crandall 12:19 into the third to secure the 5-1 final result and secure SCSU’s fourth road sweep of the season.