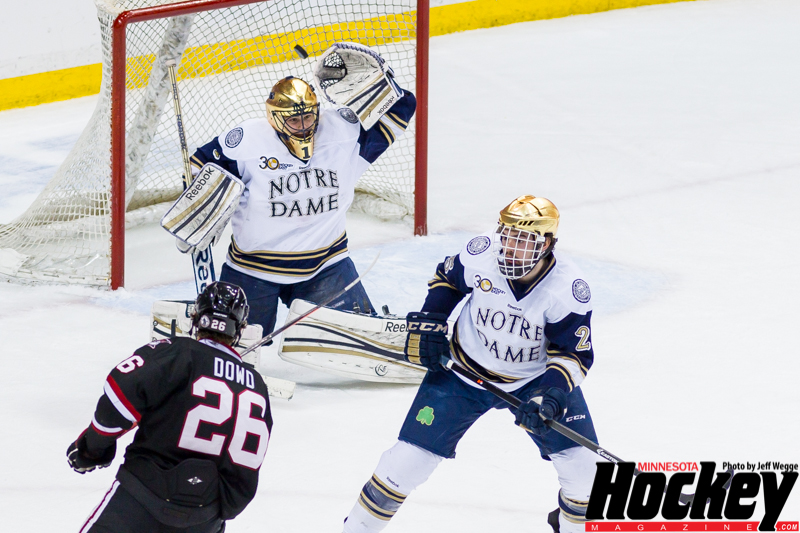 St. Cloud State’s Nic Dowd watches as his shot in overtime gets past Notre Dame goalie Steven Summerhayes to vault the Huskies over the Irish 4-3 and into the West Region final on Saturday, March 29, in St. Paul. (MHM Photo / Jeff Wegge)

SAINT PAUL — Nic Dowd score the game-winning goal 17:21 into overtime and Ryan Faragher made 39 saves, including 17 in the second period alone, as St. Cloud State overcame a huge deficit in shots on goal in regulation to defeat Notre Dame 4-3 and advance to Sunday’s NCAA West Region Final.

The third-seeded Huskies will face the tournament’s No. 1 seed, Minnesota, at 6:30 p.m. at Xcel Energy Center.  The Gopher beat Robert Morris University 7-3 earlier on Saturday.

Dowd stripped Notre Dame’s Steven Fogarty of the puck at center ice and the loose puck went to David Morley whose backhand pass hit Dowd in stride as he crossed the Irish blue line. The Hobey Baker Award finalist rifled a wrist shot from the top of the left circle which caught a piece of Irish defenseman Kevin Lind’s stick on its way behind Notre Dame goaltender Steven Summerhayes for goal No. 22 of the year.

“I kind of lost mobility in my entire body after that one went in so it is tough for me to say what I was trying to do there,” Dowd said. “At this point, any shot is a good shot and it was pretty fortunate for it to have hit his stick and then find the top shelf.”

“Once I got the puck, I just heard Dowd yelling as he was flying down the wall there and I just passed it to him,” Morley said. “Then stood there and watched him work his magic there”

Motzko said the Huskies never changed a thing from a tactical standpoint and had no answer to what turned the tide in overtime to go from being outshot 36-12 through 60 minutes to a 16-6 edge in the extra session.

“The real question is why were we so quiet in the first three?” Motzko said.  “We scored quite a few goals this year and we have a team capable of doing so. In overtime it just started to work. Why overanalyze it?”

Notre Dame never led the game at any stage thanks to the stellar performance of Faragher. The junior goaltender made several jaw-dropping saves on the night but saved his best for overtime when he denied Notre Dame’s Vince Hinostroza’s breakaway attempt.

“Give Faragher some credit, he held us in there and made the big save in overtime on the breakaway,” St. Cloud State coach Bob Motzko said.

The Huskies got on the board first on Ryan Papa’s sixth goal of the season at 6:54 of the opening period. Kalle Kossila’s pin-point pass from the left circle found Papa at the right post for a backdoor one-timer.

The Irish tied it near the halfway point of the first on Bryan Rust’s 17th of the year but St. Cloud State regained the lead with just 35 seconds remaining in the period when Brooks Bertsch scored his third of the season.

St. Cloud State’s Cory Thorson gained possession behind the Notre Dame net and spotted Bertsch, who was camped out below the hashmarks in front of Summerhayes. Bertsch one-timed Thorson’s pass to give the Huskies a 2-1 lead at the break.

Notre Dame’s Kevin Lind drew the Irish even at 8:18 of the second courtesy of an assist by Minnesota coach Don Lucia’s son Mario.  Once again, however, the Huskies responded with a late goal to jump back in front before the end of the period.

This time It was Jonny Brodzinski, whose brother Michael scored for Minnesota earlier in the evening, who turned the trick with a power-play goal at 19:35 of the second giving him 21 on the season and the Huskies three goals on just 10 shots through two periods.

“[The late-period scoring] was huge for us especially because of the way were playing,” Morley said. “We weren’t too happy with our effort and to get us a couple of big goals at the end of each period to get us a lead … Those were huge for us.”

The Irish outshot the Huskies 9-2 in the third and knotted the game once again at the 9:35 mark on a goal by Thomas DiPauli but all that did was set the stage for Dowd’s heroics.