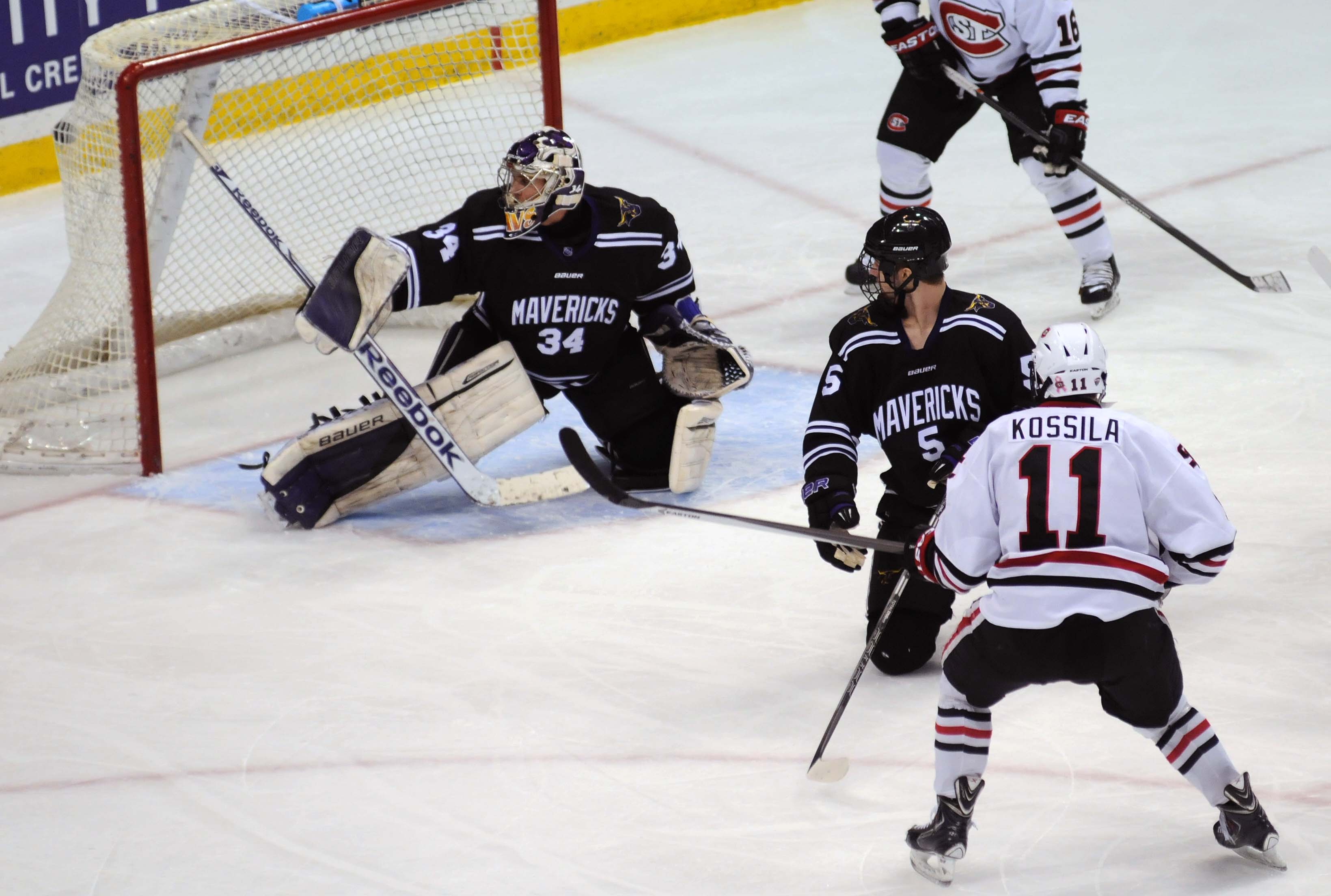 St. Cloud State coach Bob Motzko’s long-time WCHA experience told him there was reason for concern as his Huskies prepared for the short turnaround from Friday night’s loss to Minnesota to Saturday afternoon’s battle with Minnesota State. But St. Cloud State broke open a see-saw game with four second-period goals to pull away for a 6-4 victory over the Mavericks to capture the consolation game in the inaugural North Star College Cup on Saturday at Xcel Energy Center.

“It was not a pretty game by any stretch but you know our history in the WCHA Final Five, the team that plays the night game and then has to come back in the afternoon game does not have a very successful record,” Motzko said. “It was a very emotional week leading up to that game, it was an emotional night, and we just talked to our guys that we really had to have a business approach to it, that we needed to gain energy during the game.”

After Scoring St. Cloud State’s lone goal against Minnesota on Friday night, Brodzinski followed it up with a pair of goals and an assist while Nic Dowd added a goal and two assists and goaltender Ryan Faragher stopped 37 of 41 Minnesota State shots. In all, six Huskies registered at least two points including three defensemen.

“Tough game for us from the standpoint of not finishing on some opportunities that I thought we had early,” Hastings said. “I thought we’d put a lot of work into that first period and we were hoping to get it out of it even and then after that we couldn’t kill a penalty.”

St. Cloud State trailed twice at 1-0 and 2-1 before seizing the lead for good on Nic Dowd’s 12th of the season at 11:11 of the second period. A few minutes later, with the Huskies on a 5-on-3 man advantage, Brodzinski’s blast from the slot made it 4-2 and David Morley’s power-play goal less than a minute later proved to be the game winner.

“You give Jonny Brodzinski the opportunity in the middle of the slot like that without getting a block or getting a stick on it, he’s got a tendency to find twine,” Hastings said.

The Huskies, who finished the game  scoring on three of six power-play opportunities, also scored what was effectively a fourth power-play goal at 8:49 of the second to tie it at 2-2. Cory Thorson tipped in a Kevan Gravel shot from the left point just two seconds after Minnesota State defenseman Blake Thompson exited the penalty box.

The Mavericks drew first blood at 9:39 of the first period on Jean-Paul Lafontaine’s 15th goal of the season without ever really shooting the puck.

Lafontaine carried the puck to the bottom of the right circle and as he drove left toward the net the puck trickled off the toe of his stick as he attempted a pass to Teddy Blueger. Faragher, anticipating the pass, had already vacated the near post and couldn’t adjust in time to Lafontaine’s change-up.

“We got down 1-0 right off the bat, yet we battled back and our special teams were good, our top players made plays tonight,” Motzko said. “There was a lot of ugliness out there, and I’m sure both coaches and teams would agree to that but, you know what, in a tough situation our team gutted it out.”

The ugliness Motzko referred to reared its head as the Huskies responded with an opening-period goal of their own by Brodzinski at 16:08.

The Mavericks re-gained the lead just 2:11 into the second period when Sean Flanagan’s shot through traffic appeared to be trapped somewhere in Faragher’s gear. But the puck dropped out near Faragher’s feet and Bryce Gervais was right there to pounce on it for his sixth of the season.

Trailing 5-2 heading into the third period, the Mavericks scored twice on goals by Jonny McInnis and Lafontaine’s second of the game. But Kalle Kossila’s power-play goal in between ensured Minnesota State would never shrink the deficit to one.

“We didn’t get accomplished what we wanted to get accomplished, but one thing we talked about going into the third period was making sure we controlled what we get to control,” Hastings said. “I liked the stick-to-itiveness of our group, they stayed together, I thought they continued to play for each other.”

“We talked this week that we need to come down here and play two games, and if we happen to win two, they were going to give us a trophy,” Mozko said. Well it didn’t happen last night and that’s why I’m proud of our guys is that they had to respond today. We were desperate to respond today, we needed to do that.”