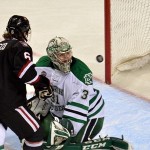 GRAND FORKS, N.D.—St. Cloud State made its long-awaited National Collegiate Hockey Conference debut a successful one on Friday night in the opening game of the first-ever NCHC series held at Ralph Engelstad Arena. Junior defenseman Andrew Prochno’s first goal of the season at 12:36 of the third period completed a five-minute, three-goal rally as SCSU held on for a 3-2 win over North Dakota.

Prochno’s shot from the left point found its way through heavy traffic in front of the UND net and slipped past goalie Zane Gothberg for a 3-1 Huskies’ lead at the time.

“I was just trying to get it through,” Prochno said. “If there was no traffic at all, it would have been an easy glove save; it was just kind of a seeing-eye goal.”

Kevin Gravel and Kalle Kossila also scored for the Huskies while goaltender Ryan Faragher, who improved his record to 3-1-1 in five career games at the Ralph, earned the game’s No. 1 star honor with 29 saves.

UND got off to a strong start and took a 1-0 lead just 3:10 into the contest on a brilliant individual effort by sophomore Drake Cagguila. The 5’9” Cagguila raced down the right side and beat 6’4” St. Cloud State defenseman Kevin Gravel with a nifty inside-out move before finishing the play with a short-side, top- shelf rocket past SCSU goaltender Ryan Faragher for his third of the year.

The mere presence of Cagguila on the ice was welcome relief for his UND teammates and the fans after a scary open-ice collision in last weekend’s exhibition win over the U.S. Under-18 team. He left the ice on a stretcher and was sent to an area hospital where he was evaluated and later released that same night.

Cagguila, whose spectacular goal was immediately put on YouTube and included in ESPN’s SportsCenter Top-10 plays of the day, said he, “felt good out there.”

North Dakota maintained that one-goal lead into the second intermission despite three power-play opportunities for the Huskies. But Gothberg—a Grand Forks native who grew up in Thief River Falls— made 18 saves through two period, part of his 27 overall, and North Dakota’s top-ranked penalty kill managed to keep St. Cloud State in check through 40 minutes.

The Huskies came out with a fury in the third period and finally got on the scoreboard when Gravel scored his second of the year at the 2:36 mark on a slapshot from the slot past a screened Gothberg. St. Cloud State kept the pressure on and captured a lead it would not relinquish less than two minutes later when sophomore Kossila knocked in a rebound of a Ben Storm shot for his second of the season.

“We just had a mental lapse for the first five, six, seven minutes,” Cagguila said. “Every line was guilty of it. I don’t know if it was effort, but it was a lot of mental errors on our part.”

Prochno’s goal provided the Huskies with what turned out to be a much-needed two-goal cushion as North Dakota wasn’t quite finished. Mark MacMillan drew UND within one with 4:21 to play in regulation and they continued to apply pressure in the game’s final minutes but Faragher and a stingySCSU defense—which made for it difficult for North Dakota to get much going offensively all night— withstood the barrage.

“We just couldn’t get the puck up ice cleanly and into the zone,” North Dakota coach Dave Hakstol said after his team failed to register a shot in three power-play opportunities. “We didn’t get a whole lot going on.”

St. Cloud has the opportunity to become the first team in four years to sweep North Dakota in Grand Forks in Saturday night’s series finale while North Dakota will be looking to salvage a series split. The puck is set to drop at 7:07 p.m.