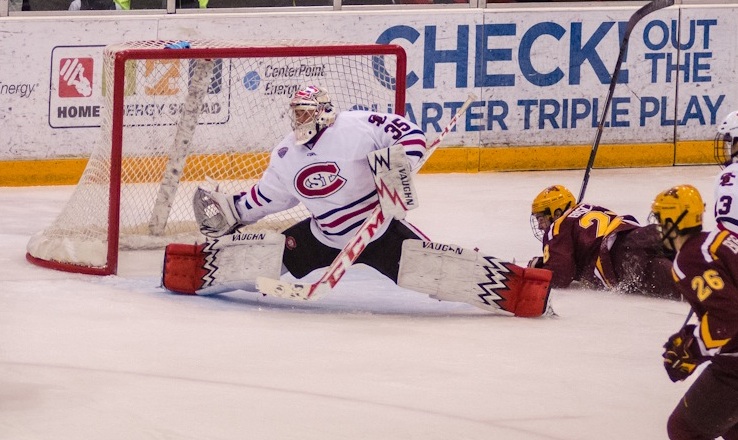 St. Cloud State G Charlie Lindgren stretches for one of his 31 saves in SCSU’s 4-1 win over No. 1 Minnesota in St. Cloud. (SCSU Athletics Photo / Maddie MacFarlane)

ST. CLOUD – The gauntlet that has been the October portion of St. Cloud State’s schedule hasn’t seen a team ranked lower than fifth.

But the Huskies are right where they wanted to be five games into the season, with three wins.

SCSU handed No. 1 Minnesota its first loss of the season, 4-1, in nonconference action Friday in front of a capacity crowd at the Herb Brooks National Hockey Center.

“Every series we play the Gophers here, it’s always great because it gets absolutely packed,” said SCSU forward and Blaine native Jonny Brodzinski. “So playing in front of a crowd like this, especially when everyone is in costumes, it’s awesome. 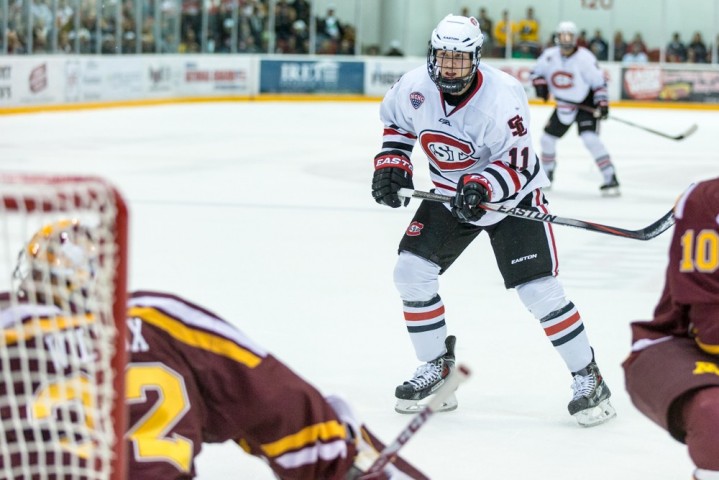 “We’ve started Fridays out just terrible this year so we wanted to put the foot down on the gas early.”

Brodzinski finished with a goal and two assists and Kalle Kossila had one of each for the Huskies.

SCSU entered last weekend’s series with No. 2 Union coming off a split at home to No. 5 Colgate, a bye week and was still in snooze mode when Union scored three in the first period.

The Gophers, coming off a comeback win and sweep against Bemidji State, got a few good chances early but then couldn’t continue into an offensive rhythm despite averaging 4.25 goals per game entering the weekend.

The Huskies’ sticks were disruptive on defense, getting in passing lanes and poking pucks off Minnesota’s blades before it could take shots.

“It was just an all-around tough game. We didn’t match their tenacity. We just didn’t have it today,” Minnesota alternate captain Seth Ambroz said.

“We got off our game, taking the penalties and looking for any reason, looking to blame the refs. You could tell we lost our composure there. We were punched in the mouth and we weren’t able to punch back. Tomorrow, we’re going to have to play desperate and come out with the victory tomorrow.”

Charlie Lindgren, a Lakeville native in his first year as SCSU’s full-time starting goalie, wasn’t as flashy with the glove but caught his share of pucks in the shoulder and he didn’t give up many juicy second chances.

“He made key saves at key moments,” SCSU coach Bob Motzko said. “One early in the game where (Minnesota) could’ve gone up but we get a power play goal and it let us get our feet underneath us.

“I think Charlie is going to get a lot of credit for this win.”

The Huskies got first-period goals on Kossila’s wrist shot from the left circle and David Morley’s swipe at a floating puck into the open net with less than two seconds on the clock.

SCSU got a power play goal 1:12 into the second period by Brodzinski on a shot that beat Minnesota goaltender Adam Wilcox 5-hole and Joey Benik was able to stuff in his second goal of the season early in the third period.

The Minnesota power play still leads the nation in goals scored (6) and effective percentage (31.6) but was held without a goal in two opportunities.

The Gophers finally got one past Lindgren at the 4:18 mark of the third period when Hudson Fasching scored on a wrister, which beat Lindgren high.

“We’ve talked about it all year. We have improvement to do,” Minnesota coach Don Lucia said. “You play a good team on the road it’s never going to be easy, but you can’t give up a couple power play goals and put yourself down 5 on 3 and some of the positions we put ourselves in.”

The Gophers had previously gone unbeaten in 16 of their last 17 games against in-state opponents. They fall to 4-1-0 overall.

And though SCSU’s month of high difficulty has closed, the weekend has not.

Motzko told his players after the game to expect a different Gophers team when they meet again at 4 p.m. Saturday at Mariucci Arena in Minneapolis.

“Coach said what (Minnesota) is going to do after the game,” Kossila said. “’They’re going to get on the bus and be quiet and they’re going to be ready tomorrow.

“Our plan is to get as much rest as possible so we can be as pissed off as they’re going to be.”