SCSU may be heading to St. Paul after 3-1 win over UMD 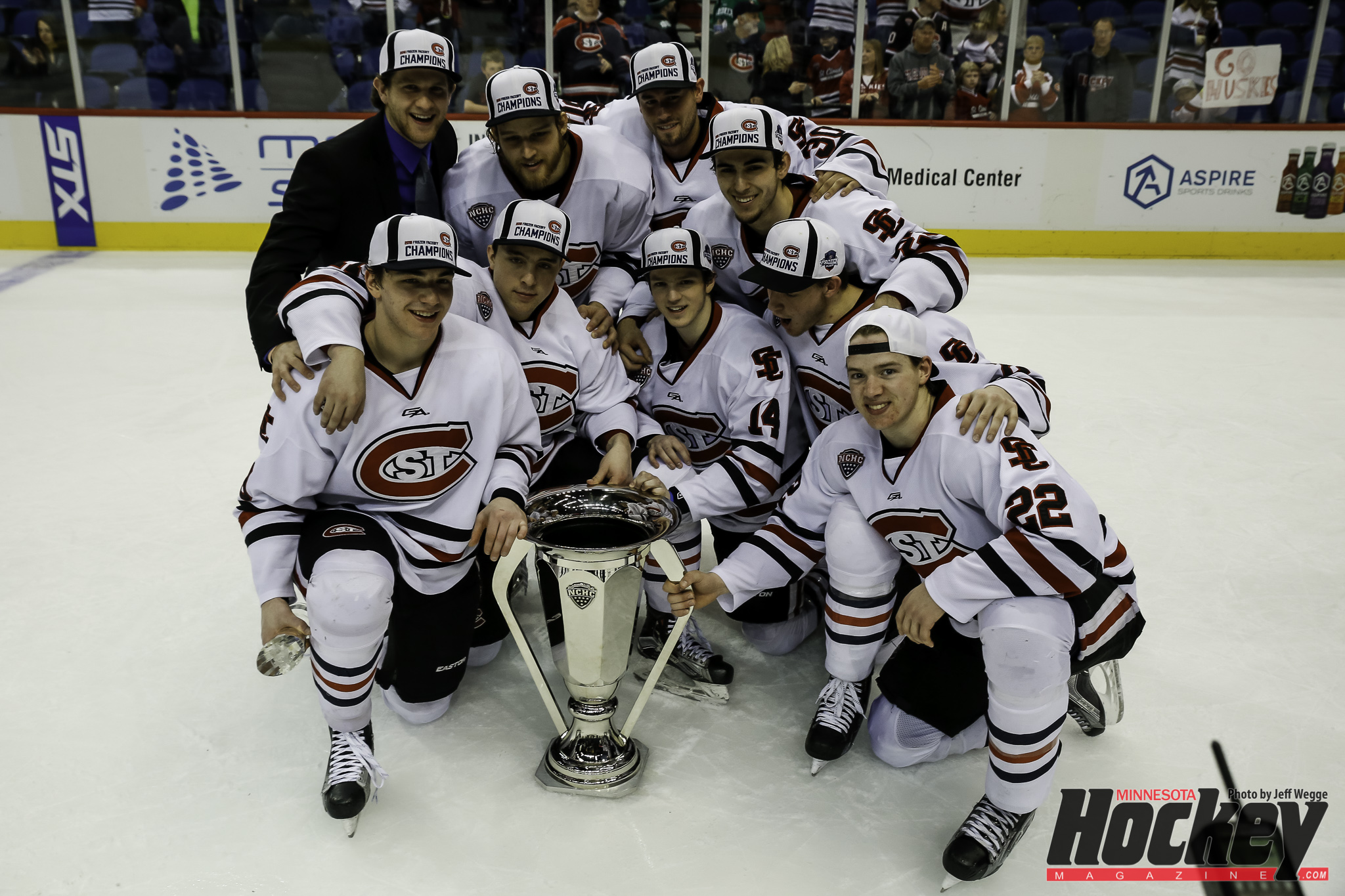 SCSU may be heading to St. Paul after 3-1 win over UMD

Minneapolis — All Mikey Eyssimont does is win tournament MVP trophies.

The St. Cloud State freshman forward took home the MVP hardware at the North Star College Cup in January with a five-point weekend. Eyssimont followed that up with two game winners among his three goals in this weekend to lead the Huskies to their first NCHC Frozen Faceoff title.

The Littleton, Colo. native’s highlight reel goal in the closing seconds of the second period broke a 1-1 tie with Minnesota-Duluth and SCSU goaltender made it hold up with 33 hard-earned saves for his 30th win of season as the Huskies beat the Bulldogs 3-1 Saturday night at Target Center.

Eyssimont’s torrid second half continued on Friday when his no look behind-the-back backhanded shot from along the goal line slipped past UMD netminder Kasimir Kaskisuo at the 19:24 mark of the second period to put the Huskies ahead for good.

“I saw Jimmy Schuldt, he shot for a stick, I think (Patrick) Russel’s,” Eyssimont said. “And it missed wide and popped out in kind of a perfect spot for me and as I got hit I just, it came past the goal line and I just tapped it in.”

The goal was Eyssimont’s 26th point in 22 games since New Year’s Day.

“We talked about it yesterday, we won the first round of the playoffs, we’ve got another round to go,” he said. “We’re excited but we want to park it quickly and try to stay off an emotional roller coaster.”

Motzko said that was the key to the win over UMD after the Huskies got off to a slow start which led to a 1-0 deficit after one period on Bulldogs defenseman Carson Soucy’s third goal of the season.

“I thought we had a great first period,” Minnesota-Duluth coach Scott Sandelin said. “Not a lot happened but we got the lead. We were playing real well.”

“They got up 1-0 and that was a scary situation because that’s what happened to us before,” Motzko said. “We needed to hunker down and it took us awhile.”

“They have great speed which makes it difficult because with great speed you can play great defense,” Motzko said. “And that’s what was limiting our chances early; we weren’t moving our feet.”

Minnesota-Duluth outshot SCSU 11-5 in the period but its momentum was slowed by Neal Pionk’s roughing penalty at the 20 minute mark of the first and Andy Welinski’s slash five minutes into the second.

The Bulldogs held the Huskie’s vaunted power play off the board but it came at a cost as St. Cloud State began to assert its control over the contest. That led to Eyssimont tying the game near the midway point of the second period off a cross-ice pass from Prow which he one-timed past UMD goalie Kasimir Kaskisuo from below the right circle.

“I don’t think our last 30-plus minutes was the way we’ve been playing,” Sandelin said. “They were very opportunistic and that’s what they do. They’ve scored a lot of goals this year.”

“I thought we got very consistent, very business-like, limited chances and played a very solid, strong game from that point on,”Motzko said. “So I liked the fact we didn’t start great but we found a way to be very business-like and get it done.”

Russel gave St. Cloud State some breathing room with his 2oth of the season early in the third and Lindgren kept the Bulldogs off the board.

The win boosted the Huskies past North Dakota and into the No. 2 overall spot in the all-important Pairwise Rankings which uses a formula mirroring that of the NCAA tournament selection committee. The general consensus late Saturday night, among those who speculate on such matters, had St. Cloud State as the No. 1 seed in the March 26-27 West Regional in St. Paul’s Xcel Energy Center.

The Bulldogs, meanwhile, dropped to the 14th spot in the Pairwise which will likely send them to Worcester, Mass. as the No. 4 seed in the Northeast Region March 25-26.