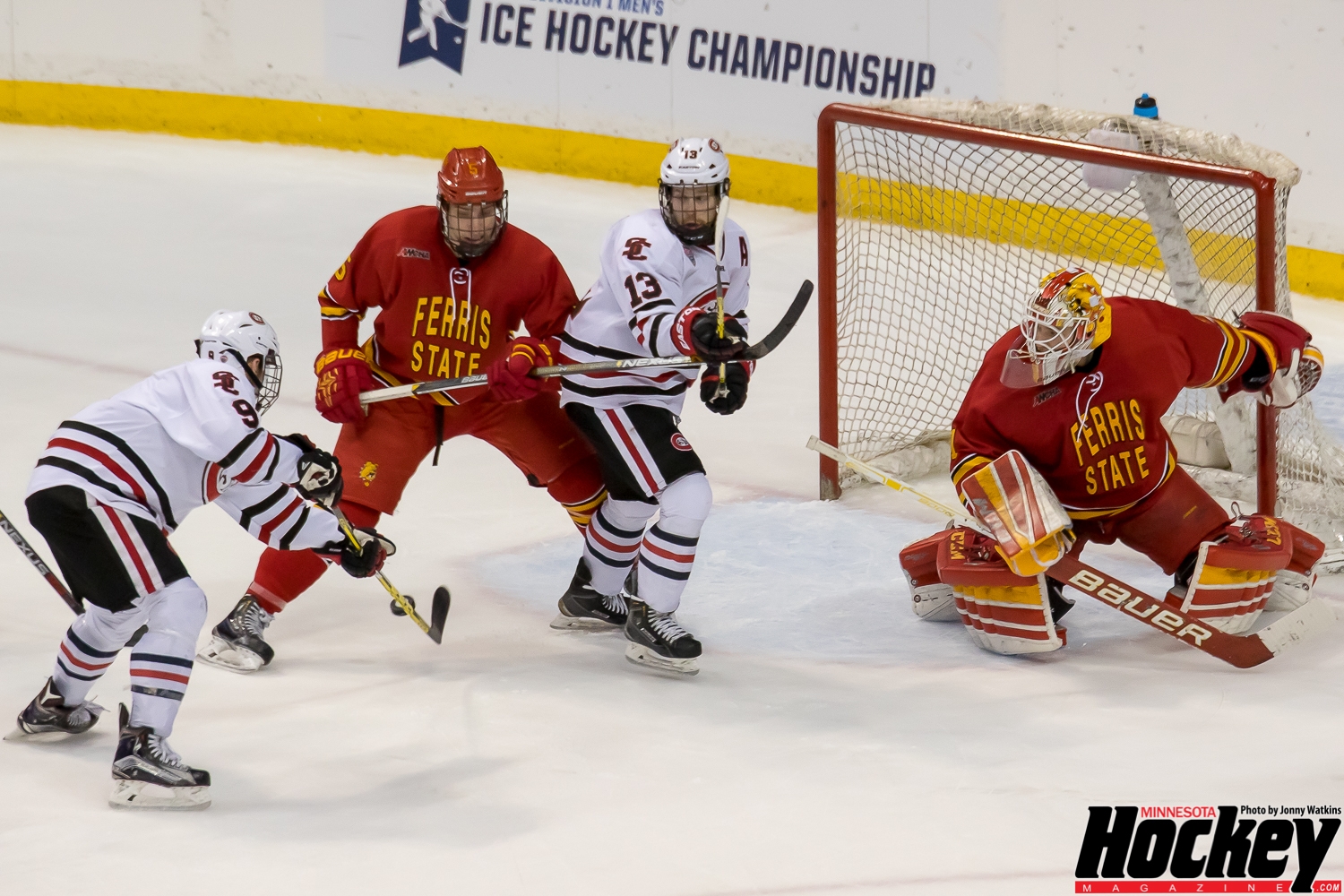 St. Cloud State’s Joey Benik scores at 11:29 of the third period to tie the game 4-4 but the Huskies would eventually fall to Ferris State 5-4 in overtime in their NCAA West Regional semifinal contest on Saturday afternoon at Xcel Energy Center. (MHM Photo / Jonny Watkins)

St. Paul — Everything had been building up until the point when Joey Benik scored his goal late in the third period Saturday.

St. Cloud State’s momentum seemed to grow as the final 20 minutes ticked away, and its fan contingent grew louder with every big save Charlie Lindgren made to keep the Huskies in game.

SCSU trailed Ferris State by two goals after two periods, and when the Huskies scored twice to draw even at four goals apiece, the atmosphere at the Xcel Energy Center was as electric as a half-empty 18,000-seat arena could be.

“Our crowd was awesome today,” SCSU coach Bob Motzko said. “We were expecting a smaller number and they came through.

“Momentum was in the building. It was lurking around. We had to make a play to get momentum back our side. We’re not used to being down, but our guys picked it up.”

Benik assisted on a Mikey Eyssimont goal early in the third and scored his own goal to tie the game. The SCSU crowd, which populated most of each side of the rink, was in frenzy as Benik jumped up and down with arms up in celebration.

The situation seemed to make sense again, with the No. 2 overall seed in command of the momentum in a first-round NCAA West Regional game against a team that team that was 30th in the PairWise.

All of that fell apart in 18 seconds, thanks to a rink-length rush, two SCSU defensemen getting crossed up, and a rebound off a Charlie Lindgren pad save.

Jared VanWormer swooped in untouched behind SCSU defensemen Ethan Prow and Jimmy Schuldt and swatted the puck into an open net to complete the 5-4 upset for fourth-seeded Ferris State at the 18-second mark of overtime.

“We had a number of chances where we could’ve taken the thing,” Motzko said. “We got our crowd in it and we got momentum back and then we make a mistake in overtime there.

“In the NCAAs, it’s a one-shot deal. It rips your heart out.”

Ferris State will face the Denver/Boston University winner at 4 p.m. Sunday at the Xcel Energy Center in the Bulldogs’ first regional final appearance since it fell to North Dakota in double OT in 2014.

SCSU would’ve set a program record for wins in a season with a victory Saturday (the Huskies finished 31-9-1) and would’ve advanced to its fifth straight regional final in as many NCAA tournament appearances.

Instead, SCSU ended its season in the building it had been eliminated in four times since 2010 (once in the WCHA Final Five and three times in the NCAAs).

Overtime was another trend that continued Saturday, as the Huskies played in their fourth first-round game that went to overtime since 2010.

Ferris State got on the scoreboard first three minutes into the game, but Jacob Benson evened the score 17 seconds later.

The teams appeared headed to the locker rooms for intermission tied at one, but coincidentally, it was Prow and Schuldt who VanWormer snuck past before he received the puck and put it past Lindgren to give the Bulldogs a 2-1 lead.

Eyssimont scored his first goal five minutes into the second period, but Ferris State scored twice to take a 4-2 lead into the third.

“We knew we had to create some offense and we got that tying goal,” SCSU forward Patrick Russell said. “We kept going for that the rest of the third period.

Added defenseman Nathan Widman: “If we were going to lose, we were going to go down swinging. We were going to open up our game, take some chances and play hockey. I think guys were gripping their sticks a little bit tight and we weren’t sharp in the first and second play.”

The SCSU-dominated crowd hadn’t been able to sustain a high level of excitement throughout much of the game, but with the Huskies’ top-notch offense, there was still enough time to give their fans something to get loud about.

Just less than five minutes into the third period, the Huskies’ second-ranked power play worked the puck to Joey Benik, whose shot went wide of the goal and ricocheted to Eyssimont waiting on the other side for an easy goal.

Benik said after the game, that his missed shot wasn’t intentional and he meant to put it on net.

Playing in what turned out to be his final college game, Benik’s moment came just past the midway point of the third.

“Schuldt had the puck at the point with good poise and he threw it down to (Jimmy) Murray,” Benik said. “It slipped through a defender to me and I had an open net because the goalie went out to Murray.”

SCSU had chances to take the lead after Benik’s game-tying goal, including a Judd Peterson backhand shot that beat Smith and clanked off the crossbar with 2:30 left in regulation.

Eyssimont had a golden opportunity to complete the hat trick and put the Huskies ahead when he missed an open net late in the game.