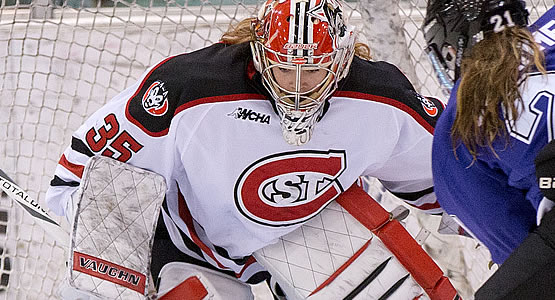 It might have been lost around the Western Collegiate Hockey Association by some folks.  After all, top-ranked Wisconsin hosts defending national champion Minnesota this weekend in the resumption of the Border Battle of two of the best women’s college programs in the land.

However, around the National Hockey Center, the fact that St. Cloud State has won a school record six-straight games is bigger news than any Black Friday sale.

No one is more excited about it than Katie Fitzgerald, the Huskies’ senior goalie who has been in goal for the same number of victories this season (seven) as in her first three years combined.

“I was just talking to my mom about this. It’s almost surreal,” said Fitzgerald. “This winning streak is just great. I can’t describe the feeling.”

In the last three weeks, St. Cloud, with Fitzgerald in goal, have outscored Minnesota State, Ohio State and Lindenwood, 20-8, and raised its overall record to 8-7-1. If they can secure a win against Minnesota Duluth this weekend, they will have as many victories in conference play (five) as they did all of last season. For her work in the streak, which includes a 1.33 goals-against average and a .950 save percentage (while making 152 stops), Fitzgerald was named WCHA Defensive Player of the Month for November.

“We are all having a lot of fun right now and we are definitely a group that is gaining confidence,” said Fitzgerald, who has a 7-7-1 record, a 2.86 goals-against average and .907 save percentage for the season.  “A lot of this is due to trusting each other and coming together as a team. The defense is blocking shots when we need to. The line combinations are working.”

The Huskies’ six-straight victories, including four wins in conference play, give them a fifth-place standing in the WCHA with a 4-7-1-1 league record. Now those are modest numbers, to be sure, but the ledger shows nearly as many league victories as they had during the entire 2014-15 campaign.

This comes from a program that has only 10 WCHA wins in the previous three years and was 18-74-9 in Fitzgerald’s first three seasons.  In Fitzgerald’s sophomore year they had but four victories, 13 one-goal losses and a change in coaches.

“You try not to get down on yourself, but a lot of petty things bother you. There is a lot of weight on your shoulders when you aren’t winning,” said Fitzgerald. “The old coaches were great but the new coaches have brought energy and everyone has really come together this year.”

Eric Rud is the director of the Huskies’ unprecedented month of November.

“Coming into the season we thought our strength would be the ‘D’ corps and goaltending, and Katie has held us in a lot of games until we would get a big goal,’’ said Rud, the SCSU head coach. “Our defense has been strong and we have played seven of them to keep everyone fresh and energized, and hopefully keep Katie fresh. Take away the first weekend at Merrimack (where the Huskies won twice) and the two blowout losses to Minnesota (11-0 and 7-0), and Katie has given us a chance to win every weekend.”

While Fitzgerald has provided solid goaltending, senior Molly Illikainen has been a sniper for the previously offensive-challenged Huskies. Moved to a line with freshman Julia Tylke and Alyssa Erickson, Illikainen is seventh in the WCHA in scoring with 12 goals, nine assists and 21 points this season. In the Huskies’ six-game winning streak she has scored eight goals and has five assists. After being held without a goal in the first six games and after finding her new linemates, Illikainen has scored a point in nine straight games and has 12 goals and 18 points in that span.

“They had chemistry right away,” Rud said. “It’s been different having a line that gives us offensive output and has allowed our other lines to relax and get better.’’

Illikainen comes from an athletic family. Her father Darrin played hockey at Minnesota Duluth, her mom Mary played basketball for UMD and her brother Alex is a freshman basketball player at Wisconsin, last year’s NCAA runner-up. Molly was a Ms. Minnesota Hockey finalist when she played for Grand Rapids High School.  She played two years at Providence College before transferring to St. Cloud last season along with defenseman Lexi Slattery.  In her first year in the WCHA, she played in 37 games and led the Huskies in points with 10 goals and nine assists. This season, she has twice been named WCHA Offensive Player of the Week.

“At every level she has gone to, Molly has been a goal scorer,” said Rud. “She has a chance to score every shift. And she can score a goal, not just one way, but in different ways. She is good with the puck and can make a move and score. She is a threat to score on the rush or by working down low.

“Molly has the will and a passion to score goals. She is like players I have seen everywhere I have gone in hockey,” said Rud, a former Colorado College defenseman, an assistant coach at his alma mater and the head coach of the Clark Cup-winning Green Bay Gamblers in the United States Hockey League.  “There is one thing about the elite player. You watch when they score. They don’t celebrate like other players.  It’s more a relief to them when they score, rather than joy.”

Now Rud recognizes his streaking team faces nationally-ranked Duluth and Minnesota in road games before the Christmas break, so he is realistic about his team’s chances at becoming an immediate WCHA contender. But he also knows you have start small and grow.

Fitzgerald and her family learned that in a real-life situation 21 years ago.

You see, Katie’s mother Mary was preeclamptic, meaning her blood pressure went to dangerous levels during the pregnancy. Katie was born 14 weeks early and weighed one pound, 11 ounces. She was given a 10 percent chance of survival by the team of doctors and nurses who were dedicated to her care.

“My mom has told me about all the dramatic things that they went through,” said Katie. “It is pretty amazing. I am still friends on Facebook with one of the nurses who took care of me in ICU. My mom kept in contact with her all these years and when Facebook came along, I got to be her friend.”

Oh, the stories they can tell about young Katie.

“My dad (Bill) tells me the story how scared they were,” said the two-time 2015 WCHA Defensive Player of the Week. “I wore a heart monitor so an alarm would go if I had an abnormal heart rate. I guess I would sneeze and everyone would jump.”

“It was a day-to-day worry, but the doctors and the team with Katie just kept us focused on the next day and then the next day,” Mary Fitzgerald told David Pickle of NCAA.org.

Katie was hospitalized for four months after birth and then she spent six months in the neonatal intensive care follow-up care clinic. By her tenth month, Katie was home and living a normal life as an active infant, but she was still small for her age.

“We thought she was going be our petite little Katie,” Mary said. “When she started to walk, she was so small that she could walk under the table in the house.”

At age 5, Katie started skating because her brother Ian played hockey. She played goal in first grade, “when everyone rotates positions,” said Fitzgerald. “But I liked it. With all things my parents went through with me, people couldn’t believe I wanted to be a goalie.”

And with her diminutive nature, Fitzgerald earned a nickname. “My coaches kept naming me ‘peanut’ because I was the smallest,” she said.

Fitzgerald said her growth spurt occurred about age eight and continued until her high school years. She is 5-foot, 11 inches now and, says Katie, “I am not a peanut anymore.” In fact, North Dakota forward Becca Kohler and Ohio State defenseman Jessica Dunne are the only players in the WCHA who are taller.

No one may be more athletic. Fitzgerald played softball, volleyball, basketball and hockey until high school. “My parents were superheroes driving me around,” she says.

Fitzgerald was a four-time most valuable player on Maine West’s high school volleyball team and also was an all-conference softball player in Des Plaines, Ill. It was that athleticism and her play as the goalie for the Chicago Mission, a national U-16 runner-up when Fitzgerald played in 2011, which caused then-SCSU Coach Jeff Giesen to offer her a scholarship in the early signing period.

Fitzgerald stayed in St. Cloud last summer to train and work on school, with plans to graduate in May and hopes of going into sports public relations. With Friend having graduated, the Huskies’ goaltending position was now all hers. With her size and quick left-handed glove hand, she is an imposing figure in goal.

“Katie has played a lot of games and she may have been in Julie’s shadow,” said Rud. “But she worked hard for her senior year and she has really stepped up and had a good year. Actually, after training hard we went to Merrimack to open the season and she didn’t have her best game. It might have served as a wake-up call for her because she has given us a chance to win most every game.”

Fitzgerald repeated as the WCHA’s Defensive Player of the Week after posting a 1.00 goals-against average and stopping 45 of 47 shots against Lindenwood in a nonconference road series last weekend. One of the victories was a 2-0 shutout, her first of the season and third of her career.

“This winning is about the team,” said Fitzgerald. “Molly is getting goals, but so are other lines. Again, we are much more confident than we’ve been. Our confidence is at a different level and expectations are higher this year.