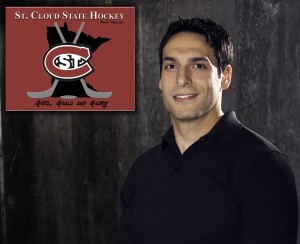 Former St. Cloud State University hockey player Marty Mjelleli hasn’t let his time away from the University hinder his passion for Husky hockey; in fact it may have rejuvenated it.

Since he left St. Cloud in his endeavor to further his hockey career, there have been many stops along the way, including the ECHL with the Gwinnett Gladiators and Johnstown Chiefs, and the Netherlands with the Nijmegen Devils and Amstel Tigers. However, on those roads, the rearview mirror seemed to push Mjelleli back to his alma mater.

In his time spent on road trips and in the hotel rooms, Mjelleli wasn’t like the majority of his teammates who wasted time in front of a television or playing video games. Instead, Mjelleli was far more infatuated with words, particularly those pertaining to sports.

What those words and ideas ended up creating was a book, filled with an in-depth comprehensive history of the men’s hockey program at SCSU titled ‘St. Cloud State Hockey: Guts, Goals, and Glory’, with the proceeds going back to the Herb Brooks National Hockey Center.

“It was an ongoing process,” Mjelleli explained. “When I got to the minors, guys would be swapping video games back and forth, and I hate video games, so I would read. I’m a sports enthusiast, so I would read football stuff, basketball, hockey, and finally I got sick and tired of reading about other peoples’ programs.”

“When I was [at SCSU], I was blessed to play with some great players and good guys … we had a great story to tell, and I’ve always gotten compliments about my storytelling abilities, so I started writing a little bit,” Mjelleli said.

That “little bit” turned into a 104-page book, on pace to becoming a best-seller, filled with photos, quotes and text showcasing the history of the program from a broad range of perspectives in the hockey community. The idea that was set aside for a while had the dust blown off it while Mjelleli reconnected with former teammates and Husky hockey supporters during an event this summer.

“It got brought up this summer, when I was going to a luncheon with everybody,” Mjelleli said. “The trophies were all out on display and it was a presentation about what they want to do for the future of Husky hockey, and I thought, there is no greater time to start this book up again and give back to the program.”

What Mjelleli called a “busy summer” was filled with research, where he teamed up with Tom Nelson, Assistant Director of Athletic Media Relations, and school archivists to dig up all the fossils affiliated with SCSU hockey. With the 2012-13 season closing out as Mjelleli was in the middle of his project, extra work was added with players moving to the next level, and banners being hung.

The fear of the idea possibly getting stolen led to Mjelleli keeping the project within a tight circle, including family, a few close friends and professional contacts. When Mjelleli had what he felt was a good product with plenty of information, he presented the project to a trustworthy SCSU alum, and current editor for ‘Upper Deck Sports Cards’, Sean LaFavor.

“He [LaFavor] uprooted his life here and he’s out in California working for Upper Deck Sports,” Mjelleli said. “It was really nice having a hockey guy look at that and put things into more of a professional light, and make things polished and smoothed. He’s a Husky through-and-through, he was there in the glory days of the early 2000s.”

“I had most of it done and then I presented it to Sean … I knew I could trust him, he wrote for the Faribault Daily News and he’s a St. Cloud State alum.”

With a few close hands on deck, Mjelleli started to branch out nationally in order to obtain quotes and photos from SCSU players, Minnesota hockey legends, and notable NHL faces such as Pierre McGuire. By capturing these big name quotes, jerseys, and photos, Mjelleli hoped to solidify the book nationally, professionally and solidify its credibility.

“I felt if I kept this regional I would have failed everybody, I wanted to take this thing national,” Mjelleli said. “When you start getting quotes from all the players, you really have to turn over every rock, and I got some from a few hockey icons like Lou Nanne, who has a quote on the back cover.

“Was he a Husky? No. But it’s a stamp of approval for the Minnesota kids.”

NBC Sports hockey spokesman McGuire seemed notably helpful and excited according to Mjelleli, offering a more than helpful sum of words to add to the book’s authenticity and expertise.

“He was dynamite, he wanted to give me a quote right then and there,” Mjelleli said about his speaking with McGuire. “I told him to please think about it and write some stuff down and get back to me. He sent me almost a page long, it was awesome.”

As smooth and pristine as the book came out, continuous hurdles, roadblocks and challenges came up, as they always do, while perfecting ‘Guts, Goals, and Glory’. The adventure of getting photos from and of former players, working around certain player’s team policies and even battles including time and technology, proved to be a hellacious task.

“Getting the pictures was the hard part,” Mjelleli said. “Getting the older ones to have the right pixels or DI, some of them didn’t work so you had to resize them and crop them, and just finding the certain ones of certain players that took the longest time.”

Once the pictures were cropped, sized, and perfected with the help of his team and stepfather, the finished product included roughly 400 photos, which come in forms of individual as well as team pictures throughout the book.

“I wanted to incorporate every person who played in the program in there,” Mjelleli said. “This is not about me, this is about everyone else, so there are like four hundred or so pictures in there. So when you open that up, if you’ve walked through those doors and laced up a pair of skates… regardless of the division you’re in, you’re going to have a picture in the book.

“The old ones [photos] are pretty cool, they show the team photo’s outside, and you can see the old cars.”

Mjelleli, the recently-married assistant hockey coach of the St. Olaf’s men’s program, and now author, chose the series against UMD on Feb. 15 to release the book, offering a open signing with several other former Huskies. Ironically, the only home sweep for the Huskies in the season came that same weekend the book signing occurred.

“I wanted to find a way to give back to the program,” Mjelleli said. “I think this book was a great way for me to do just that.”

“St. Cloud State Hockey: Guts, Goals, and Glory” is currently available in as many as eight locations, including Hockey Giant, Hockey Zone, Dave’s Sports Shop, The College Shop in MOA, Scheels, Amazon, The Hockey Lodge in the Xcel Energy Center. Current listing price is $24.95 on Amazon, with  the proceeds going back to the Brooks Center.