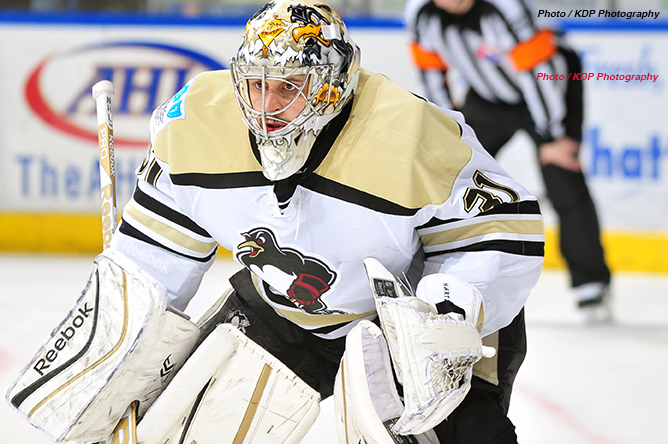 As a teenager, Eric Hartzell played baseball in the summer, football in the fall and hockey when the mud froze on his spikes. He was an outfielder, a quarterback and a hybrid, raised in the Twin Cities suburb of White Bear Lake, Minn.

“It was almost like playing two hockey sports at the same time,” said Hartzell. “We had organized youth hockey at the arena, where I was playing goalie as a peewee, then we’d go home to play on the pond in my backyard.”

Away from the arena, on pond ice, Hartzell was a skater, not a stopper. He credits his well-rounded youth sports experience for making him the player he is today, which is to say one of the American Hockey League’s top goaltenders.

“Skating out, and being a multi-sport athlete, made me quicker, stronger and faster,” he said. “It helped for sure. When you’re playing all those sports, it all correlates, but as a kid, you’re not thinking about that. You’re just playing. But it’s making your feet quicker, your hand-eye coordination better – things that go hand-in-hand with other sports.”

Now a rookie with the Wilkes-Barre/Scranton Penguins – and the AHL’s reigning Goaltender of the Month – Hartzell is an archetype of overall athleticism in goal. He’s big, too – 6-foot-4, 200 pounds – giving the Quinnipiac University product a powerful combination of agility and net coverage. It’s a package that began developing at a young age, when all that really mattered was fun.

“My youth hockey days were the best days of my life,” said Hartzell. “Just growing up and playing hockey with your best friends, in your town, sharing great moments – it was terrific.”

One component of his youth hockey experience – the cross-ice game – remains a valuable piece of his professional preparation today.

“In my opinion, 3-on-3 cross-ice is amazing for everyone,” he said. “Everything happens quick, so you get opportunities to develop skills without even thinking about it. And that goes for goalies, too. Pucks are moving faster, there’s no lull in the game, and that helps you stay on your toes and develop your skills. When the time comes in a game, you’re more ready because of those small-area games.”

Looking back now on the games that followed him from his youth, Hartzell is even more aware of the role they played in his development. He also salutes the coaches, including his dad, who helped him grow. As for what makes the ideal youth coach, Hartzell says the most important thing is finding a coach who cares.

“At the youth ages, Xs and Os don’t matter,” he said. “It’s all about the energy and preparation that the coaches put in. My coaches did a great job preparing kids, and I can’t thank them enough.”