IKE, in his own words 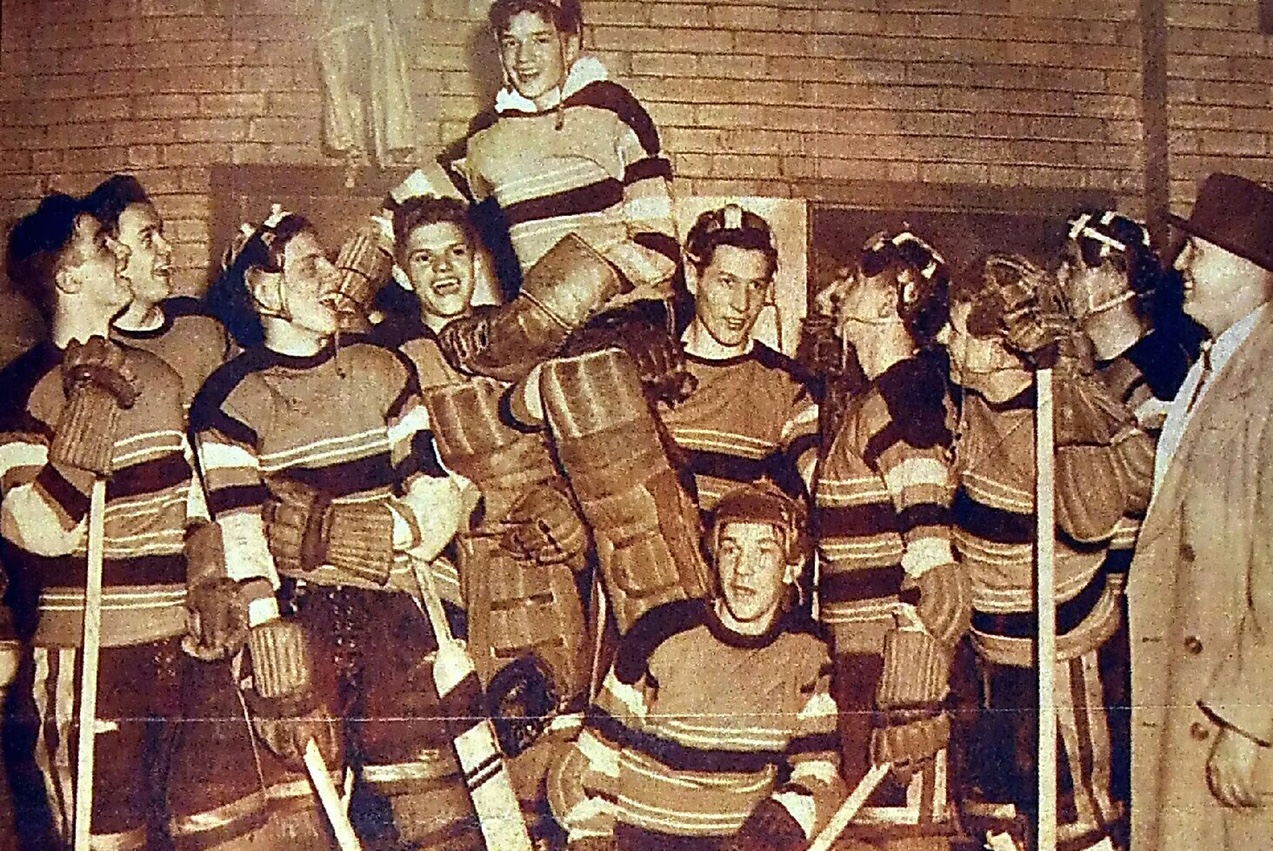 Willard Ikola is lifted up by his teammates high above a kneeling John Mayasich as Eveleth coach Cliff Thompson looks on in approval of Eveleth’s 1948 state title celebration.  (Photo courtesy of Ikola Archives – VintageMinnesotaHockey.com)

One thing I recognized early was the tradition of outstanding Eveleth goaltenders.  At the Hippodrome, I saw the big photo of Oscar Almquist, who had been an All-American at St. Mary’s in Winona and  later became one of the great high school coaches at Roseau.  At the other end of the rink was a big picture of Mike Karakas, when he was playing for the Chicago Blackhawks.  Then there were the photos of Frankie Brimsek, who was a star for the Boston Bruins and one of the best players in the NHL and Sam LoPresti, who played for the Blackhawks.  We were all aware that both Karakas and Brimsek has been NHL Rookies of the Year.  Can you imagine that Eveleth High School had a ten-year period when their starting goalies were Karakas, Brimsek, and LoPresti from 1926-1935? 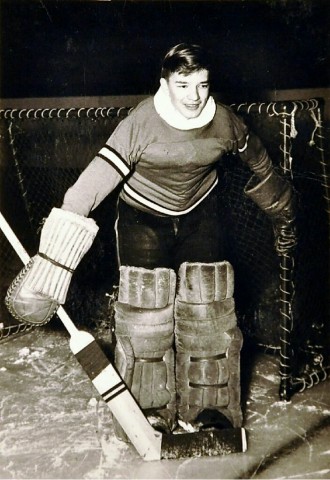 Goaltending in my era was so different. It was just about playing the angles.  We never did the V-drop, we had never even heard of it.  If you were a good skater, you could move up and back and keep the best angle.  Despite what a lot of people used to think, you wanted to have one of your better skaters in net because you had to be so good on your edges.  It was weird but a lot of kids around my age played goalie in their boots so I had a big advantage over them.  Once I started playing a lot, the other kids told me I was good and my confidence was strong.

As much as we all liked hockey, we played just about every sport imaginable in our neighborhood.  We had a close-knit group of boys who did everything together and it seemed like just about everybody participated, no matter what their skill level was.  Without all the technology of today and in the midst of a Depression, we were fortunate to just have each other to hang around with and do active things all the time.

Basically, we lived outside with our buddies. Nobody every seemed to be inside – there was radio but no television and let’s face it, there just wasn’t a lot of room in our homes, either.  Our parents gave us a lot of freedom.  We never missed any meals and we had to be home by a certain hour but we were in the safety of other kids and our parents didn’t worry about us.  We not only played at the rinks and playgrounds but on the streets and in the alleys.

Hockey was the favorite sport of most of us but we played a ton of outside basketball on rims attached to garages, playing 21 and four-horses.  We played baseball and football at various places around town.  We just went from activity to the other, improvising as we went.  Bocce ball and horseshoes; you name it, we played it.  It was competitive but not mean-spirited and this was how we climbed the social ladder. You name it and we played it –  croquet, softball, golf, tetherball and many others. 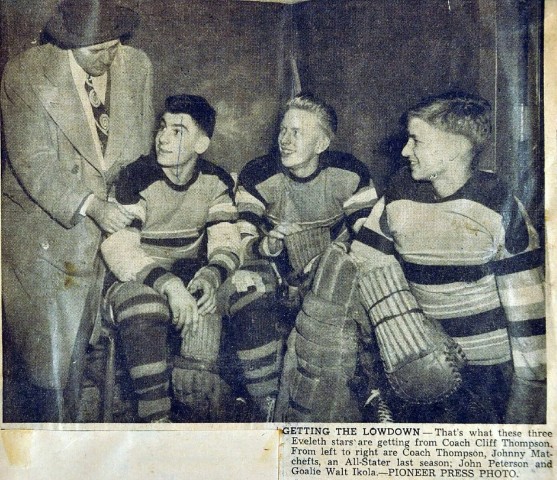 Eveleth had a good recreation department and one summer, they employed Cliff Thompson, the high school and junior college hockey coach, up at the ballpark. We grew to learn that he was a fantastic baseball coach but as hockey players, when we found out he was going to be up there, we just flocked to the place.  Myself and the others idolized the guy.  On Saturday morning at the Hippodrome, when we would see him up in the stands watching, let me tell you the play would pick up because we wanted to impress him and play for him some day.  Each week someone would whisper, “Hey, Coach Thompson is here” and things really got rolling.  There was no question that we played harder when he was there and he showed up every week. We wondered if he was picking his team for five or six years down the road.

While we had our disagreements when we played our sports and games, we settled our own problems and things would always get back to normal.  I guess that’s how we learned how to manage things.  It was great for teaching us creativity and how to be leaders.  As a kid, everybody seemed to have a nickname and mine wasn’t real original.   It was simply… “IKE”.

With my brother Roy playing at Colorado College, I was already thinking about going to college and playing at that level and becoming a physical education instructor and coach.  It wasn’t a tough decision when I was offered the chance to play with Coach Thompson’s club.  I figured I would have a heckuva better chance getting a hockey scholarship than a band scholarship.

Half of the title team from 1945 was back to defend the state title in 1945-46; guys like Ronnie Martinson, Andy Gambucci, Bice Ventrucci and Milan Begich.  There were only 11 players on the first state title team and we had just 10 players and myself on that year’s squad.  At 5’4″ and 100 pounds, I was not an imposing figure in the net as a 13-year-old and players could shoot over my shoulder and hit the corner.  However, I wasn’t intimidated by the older players because I had played shinny with them for years and knew them well. Plus, they were good about not firing the puck at my head.

As for practices, in those days, it consisted almost entirely of scrimmaging. There was very little drill work or concentration on fundamentals.  Coach Thompson, like most coaches of that era, was never on skates but on the bench with his boots on.  Actually, I never saw Cliff ever skate, not once!  Coach never talked to me about goaltending, not once in the five years I played for him.  I noticed that he would call the forwards or defensemen over for some short words of advice but it was almost always just scrimmaging. 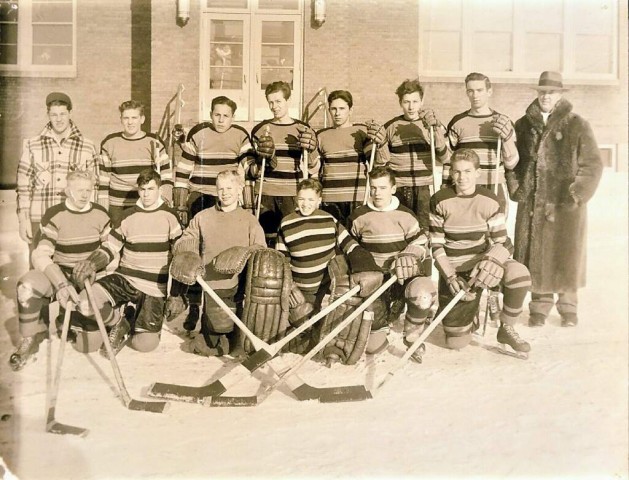 Willard Ikola (center front) as an eighth grader on Eveleth’s 1945-46 team. Ikola did not accompany his teammates when they traveled to St.Paul for the state tournament as backup goalies were a luxury at the time. (Photo courtesy of Ikola Archives – VintageMinnesotaHockey.com)

Ronnie Drobnick, of course, was the senior goalie and was expected to play all the games.  He never did give me any special treatment or tutoring, either, but I just watched what he did and tried to emulate him and all the other great goalies I had seen play in Eveleth.  Ronnie got yellow jaundice and was out for about three weeks in the middle of the season and I was thrust in the goal as an 8th-grader.  In those four games, we won three games with ease and tied Roseau 3-3.  Ronnie came back to finish the season and I didn’t even get to go with the team to the state tournament, but it really didn’t bother me.  Most teams didn’t have a backup goalie in those days.  I didn’t even earn a letter for that year.

Dialed to WEVE, our local radio station, I listened to us compete in the state tournament.  We lost to Rochester 2-1 in the semifinals and then beat St. Paul Johnson to take third.  Ron Martinson later told me when we were at Michigan that some of the guys weren’t following training rules and he didn’t think they were serious enough.

My freshman year, we beat Hibbing 5-3 in the region finals to make it to the 1947 tourney.  It was just the second time I had ever been to the Twin Cities.  To see the big buildings and all the hotels and restaurants, it was an eye-full. The largest building in Eveleth was the Park Hotel and that was three stories. We spent a lot of time just going up and down the elevators at the St. Paul Hotel, which was real close to the St. Paul Auditorium rink.  At that time, they had elevator operators and we drove them crazy with our requests.  One hotel even had an escalator and we would be running up the down escalator and down the up escalator like a bunch of fools. We worried more about how to order off a menu than we did playing the games.  Hockey was in our comfort zone.  One funny thing that happened was a photographer took a picture of me, all 100 pounds, in a dresser drawer in our hotel room with a caption that read…”WEE WILLARD” and it was in the papers the next day. 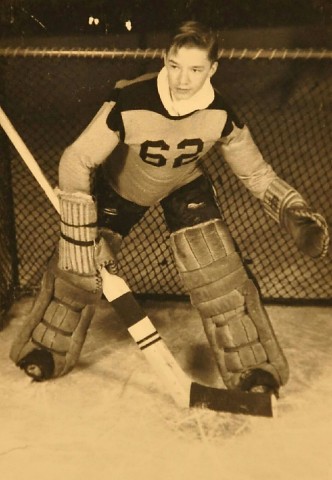 The St. Paul Auditorium had artificial ice and it was the first time I had played on that surface.  The ice surface was very dark and it was difficult to see the puck.  There were two locker rooms but otherwise, they just had a makeshift set-up with curtains for the teams that were dressing for the next game.  It was pretty “Mickey Mouse”, really.  With smoking permitted in the lobbies and corridors, there was a constant cloud of smoke that permeated the rink, too.

We had just 11 players on that entire 1947 team and our juniors were the key to our club.   We easily downed Willmar 6-0 in my first game at state and my brother Earl scored a goal and had an assist in that game. Next up was Roseau, the pre-tournament favorite, in the semis.  Roseau was led by Rube Bjorkman and they had a good team and had beaten us at Eveleth during the season.  Bjorkman wore those big goggles but he was an outstanding player and, of course, would go on to star with the Gophers and later the U.S. Nationals and Olympic teams.  He also coached at Greenway and then at R.P.I. and North Dakota.

Sure enough, Bjorkman beat me three times to lead the Rams to a 4-1 win. We played pretty well but they were just too much. In the finals, Roseau got upset by St. Paul Johnson.  Prior to the title game, we played Minneapolis West in the third-place game.  John Matchefts, one of my best buddies, scored twice but a guy named Kevin Farley notched a hat trick and we lost 5-3.  It would be the last time Eveleth High School would lose a game until the 1952 season.  Eventually, the winning streak would reach 78 games. That record will likely never be broken, though International Falls in the 1960’s and Bloomington Jefferson in the 1990’s both took a crack at it.

There is much more about Ikola’s life and career where that came from. To learn more about the book and order your copy, click on the cover image below! 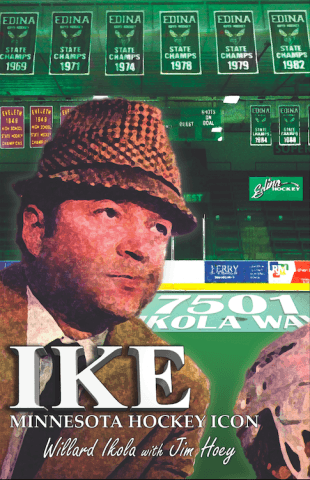