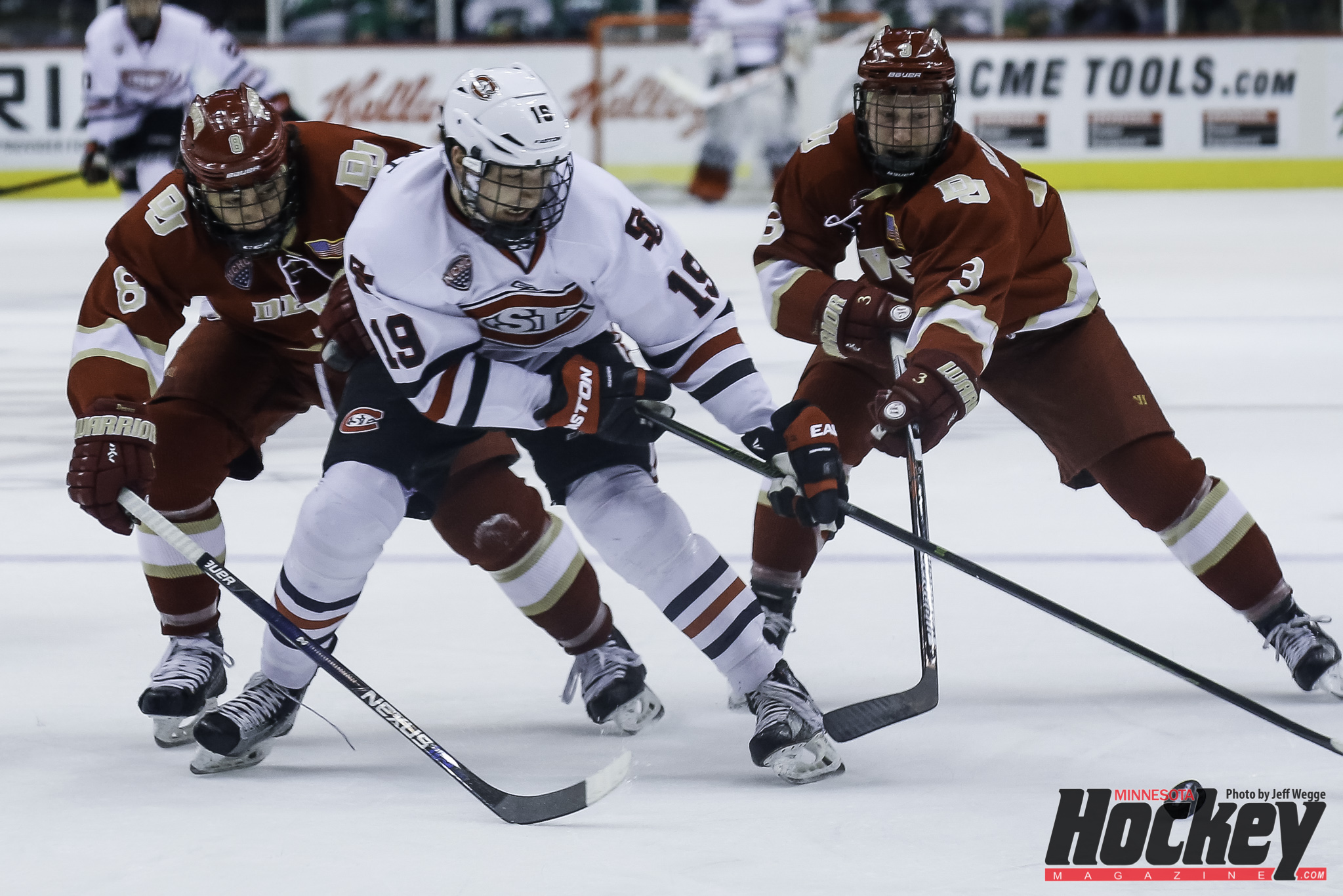 Minneapolis — Some players, for whatever reason, step up their games against certain opponents. For St. Cloud State’s Mikey Eyssimont, it’s an entire state.

The Littleton, Colo. native ‘s goal at 1:41 of the third period gave the Huskies a 3-1 lead and turned out to be the difference in the Huskies’ 4-2 National Collegiate Hockey Conference Frozen Faceoff semifinal win over Denver on Friday night at Target Center.

With SCSU up 2-1 early in the third period, Eyssimont did a nice job of protecting the puck down low and his centering pass to Patrick Russell deflected off traffic in front and behind bewildered Pioneers goaltender Tanner Jalliet. No. 3 seed Denver’s Evan Janssen answered for the Pioneers just 32 seconds later but the Huskies held DU at bay until defenseman Jimmy Schuldt’s empty-net goal sealed it.

“So far, so good against the Colorado teams,” Eyssimont said after the Huskies snapped Denver’s 11-game winning streak. “It feels good but I can’t think about it too much right now.”

Of the freshman’s no 29 career points (10-19–29) seven of them (2-5–7), or nearly a quarter, have come against against either Denver or Colorado College. In fact, St. Cloud State coach Bob Motzko believes Eyssimont’s rookie season turned a corner when St. Cloud State visited Denver to close out the season’s first half.

Eyssimont had bounced up and down the line chart and in and out of the SCSU lineup leading up to that Dec. 11-12 series sweep at Denver. He came into the weekend with just four points but played well and his beautiful assist to complete Kalle Kossila’s hat trick helped cap off the weekend’s scoring.

“How many time do you see these young guys come back after Christmas and the sky is blue and they start playing?” Motzko asked rhetorically. “And Mikey started to play and we all saw it and he’s been very, very good.”

Good indeed. In 21 games since Jan. 1,the 2014 graduate of Chatfield Senior High School has racked up 24 points on nine goals and 15 assists.