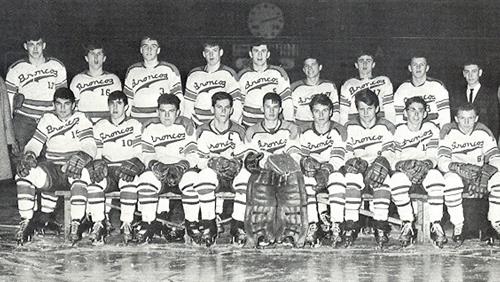 Entire team being inducted into the Bronco Athletic Hall of Fame
along with Mike “Lefty” Curran.

The first team being inducted into the Bronco Athletic Hall of Fame plans to be well represented next Saturday when the state champion 1964-65 International Falls boys hockey team will be honored the evening of April 20 during an induction banquet at the AmericInn.

That Broncos team capped off a perfect 27-0-0 season by defeating Bloomington, 7-0, in the state title game.

In an era when boys hockey teams in Minnesota played three 12-minute periods with the tournament games all in the same division regardless of school size, the Falls tallied 17 goals in the three state tournament games, in which the Broncos averaged a goal about every 6 minutes and 20 seconds.

Peter Fichuk, who played in his senior season as a forward on the 1964-65 state title team, which was the second-consecutive in a string of three Bronco squads in a row to win the championship, will be speaking on behalf of the entire team at the induction banquet.

“It’s going to be nice to see the rest of the (players) have their honor,” said Fichuk, who also noted he will be hosting an open house for his teammates the afternoon before the induction banquet.

Fichuk, who moved back to the Falls area upon his retirement after working more than 20 years with the industrial company Grainger, where he was a salesman, described the 1964-65 Broncos as “basically a community team.”

“We grew up in this town and we had four rinks — four outdoor rinks — and each rink (was) supported like an elementary team,” Fichuk said. “We could play each other without having to travel to the Iron Range.

“Our neighbor, Fort Frances, they had four or five teams, so we had a lot of great competition growing up that we could just get loaded into a car, or a couple of cars, and play a game.”

Fichuk, who later attended the University of Minnesota and played on the 1970-71 U.S. National Team, was also part of the Broncos’ team that won a state title in 1964 and placed runner-up at state in 1963.

“Of all the (hockey) experiences that I had… the best experience goes back to this (1964-65) team,” Fichuk said. “If you watch the state high school tournament even today, these kids that win, that experience will probably be their best hockey experience of their lifetime.”

While the players practicing at the outdoor rinks in the Falls during the 1960s had to also battle against the elements, Fichuk noted the Broncos had their indoor practices in Fort Frances when it was less strict to drive into Canada.

“We would dress in a locker room at the high school with our equipment and then we would be driven over in a bus and practice,” he said. “We would lose some time — traveling time — but we still probably got in a good hour and a half, hour and 45 minutes.”

Given the amount of talent and depth on the 1964-65 team, from which 13 players were offered scholarships to play Division I college hockey, Fichuk said head coach Larry Ross could have had two high school hockey teams from the Falls.

“There were that many players, and the people who were selected for the high school team, we felt pretty fortunate,” he said. “The competition was good. We probably would have played each other in the state tournament, if we would have been aligned in the right regions.”

Three of the players from the team — Fichuk, forward Tim Sheehy and defenseman Gary Wood — were named in 2011 to the Minnesota Hockey Hub’s 100 greatest players in the state’s high school hockey history.

Fichuk said the tradition of hockey in the Falls was a big part of the 1964-65 team ending up as a state champion with a perfect record.

“We learned how to win early, and we did not let that up,” he said.

Fichuk said Ross, who was among the inaugural class of nine individuals inducted last year into the Bronco Athletic Hall of Fame, “still should be commended for these great teams.”

“We’re one team of many,” Fichuk said. “I think everyone on this team appreciates the honor of being the first team into the Hall of Fame.”

Steve Ross, the son of the late head coach, is also a member of the 1964-65 team and spoke on behalf of his father at last year’s induction banquet.

With the team members now around retirement age, Fichuk noted two have passed away — Wood and Marshall Sether — while he is expecting the majority of the players still alive to be at next Saturday’s induction ceremony.

One player, Tim Sheehy, was inducted individually last year and is planning to be on hand again for this year’s ceremony, which will also feature the induction of his younger brother, Neil Sheehy.

Tim and Neil Sheehy today are both agents for professional hockey players.

Tim Sheehy, who graduated from FHS in 1966 and was able to play on the varsity team in his freshman year in high school, said the 1964-65 team had juniors and seniors who were “great players.”

“I was very fortunate to play on a team like that with players who were very competitive,” Tim Sheehy said. “We experienced a lot together.”

After playing college hockey at Boston College, Tim Sheehy was a co-captain of the 1972 U.S. Olympic Hockey Team that won a silver medal. He went on to play for the New England Whalers, Edmonton Oilers and Birmingham Bulls.

Tim Sheehy isn’t the only player on the 1964-65 Broncos with a brother being inducted individually this year.

Tony Curran, a forward on the 1964-65 team who later played college hockey at West Point, is the younger brother of Mike “Lefty” Curran, the goalie on the Broncos’ team that won the state title in 1962 and a 2013 Hall of Fame inductee.

Following 10 years of military service, Tony Curran, who now resides in Vermont, noted he worked more than 20 years for IBM and then retired. He said he is also planning on being back in the Falls next Saturday.

Buzzy Christensen, who was part of both Bronco hockey teams winning state titles with perfect records in the mid 1960s, said the debate continues as to which team was better.

Christensen, who was also able to coach a state champion hockey team after he became a teacher in Grand Rapids, called the 1964-65 team’s induction “a thrill of a lifetime.”

Christensen, who now has his permanent residence in Grand Rapids and spends winters in Arizona, where he enjoys going golfing, said he is also planning on being on hand for the induction ceremony.

Bronco Athletic Hall of Fame selection committee member Timm Ringhofer said he is expecting around as many people for this year’s induction ceremony as last year when close to 200 people were on hand.

The banquet tickets are $25 each and are available at City Drug, County Market and the Espresso Lane in Super One. They may also be purchased in the Falls High School office, or by contacting Ringhofer at (218) 324-3053.