Torchetti to return after AHL club bottoms out 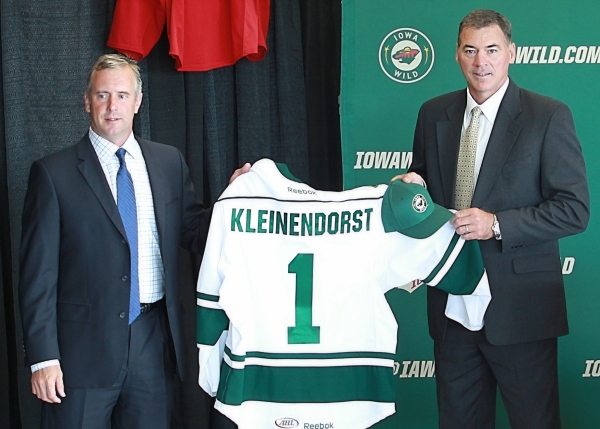 Torchetti to return after AHL club bottoms out

DES MOINES – After a 27-36-7-6 record last season and a 2-10-0-0 start to this season, the Minneapolis StarTribune’s Michael Russo is reporting the Iowa Wild have fired coach Kurt Kleinendorst. The team is expected to announce former Houston Aeros coach John Torchetti as his replacement on Tuesday.

Through the first 12 games of this season, the Wild are just 1-6 on their home ice in Des Moines and 1-4 on the road. They are averaging just 2.25 goals for per game while allowing 3.83 goals per game.

Following their most recent game, a 5-1 loss to the Chicago Wolves at Wells Fargo Arena in Des Moines, Kleinendorst said that the team’s lack of success was a reflection on him.

“This is a different group than the group that we had last year,” Kleinendorst said. “What’s the common denominator? I guess it’s the guy standing behind the bench, so it’s frustrating, but if you’re looking for answers right now, obviously I don’t have them because if we did, we’d probably have a better home record than what we have.”

In 2011 Kleinendorst, a Grand Rapids, Minn. native, won the Calder Cup as the head coach of the Binghamton Senators.

Torchetti coached the Houston Aeros to two-straight postseason appearances and a 75-51-26 record over two seasons at the helm from 2011-2013. When the team relocated, he took the head coaching job with CSKA Moscow of the KHL in Russia and the Wild hired Kleinendorst fresh off of one season guiding the University of Alabama-Huntsville to a 3-21-1 mark.

Torchetti is expected to be on the ice with the Wild for their practice on Tuesday in Des Moines. 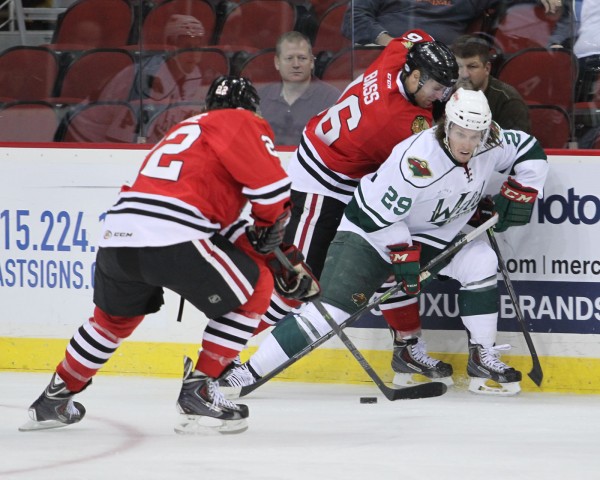 The Wild played two games against the Wolves on Saturday and Sunday in Des Moines and lost the first contest by a score of 4-2 as they held the game close until the Wolves scored an empty-net goal with 10 seconds to go.

In Sunday’s game things were bad from the start for the Wild. They were down 4-0 before Zack Mitchell found the back of the net with just 2:23 to go in the game.

The goal, which was assisted by forward Marc Hagel and defenseman Justin Falk, was Mitchell’s second in as many games. Mitchell is now the Wild’s fifth-leading scorer with six points (four goals, two assits) while Hagel is the team’s goal scoring leader and is tied for second on the team with seven points (five goals, two assists) with Jordan Schroeder leading the team with 11 points (four goals, seven assists).

After Sunday’s game, Iowa defenseman Justin Falk said that “maybe we’re just not getting a full effort” from the team.

“You’ve got to find it in yourself to want to go out there and make a difference,” Falk said. “I don’t want to sound selfish but you’ve got to want the most for yourself and if you’re working hard for yourself that’s going to filter down and do good things for the team.”

Kleinendorst noted that his players were “so low” after what ultimately became his final game as their coach.

“You’d think by now we would’ve hit bottom but yet every night we come out and it seems like we find a new one,” Kleinendorst said. “That’s a little bit disheartening.”

On Friday and Saturday, they return home to play a pair of games against the Oklahoma City Barons. The Wild lost 5-3 and 4-2 in their last two games at Oklahoma City this season.