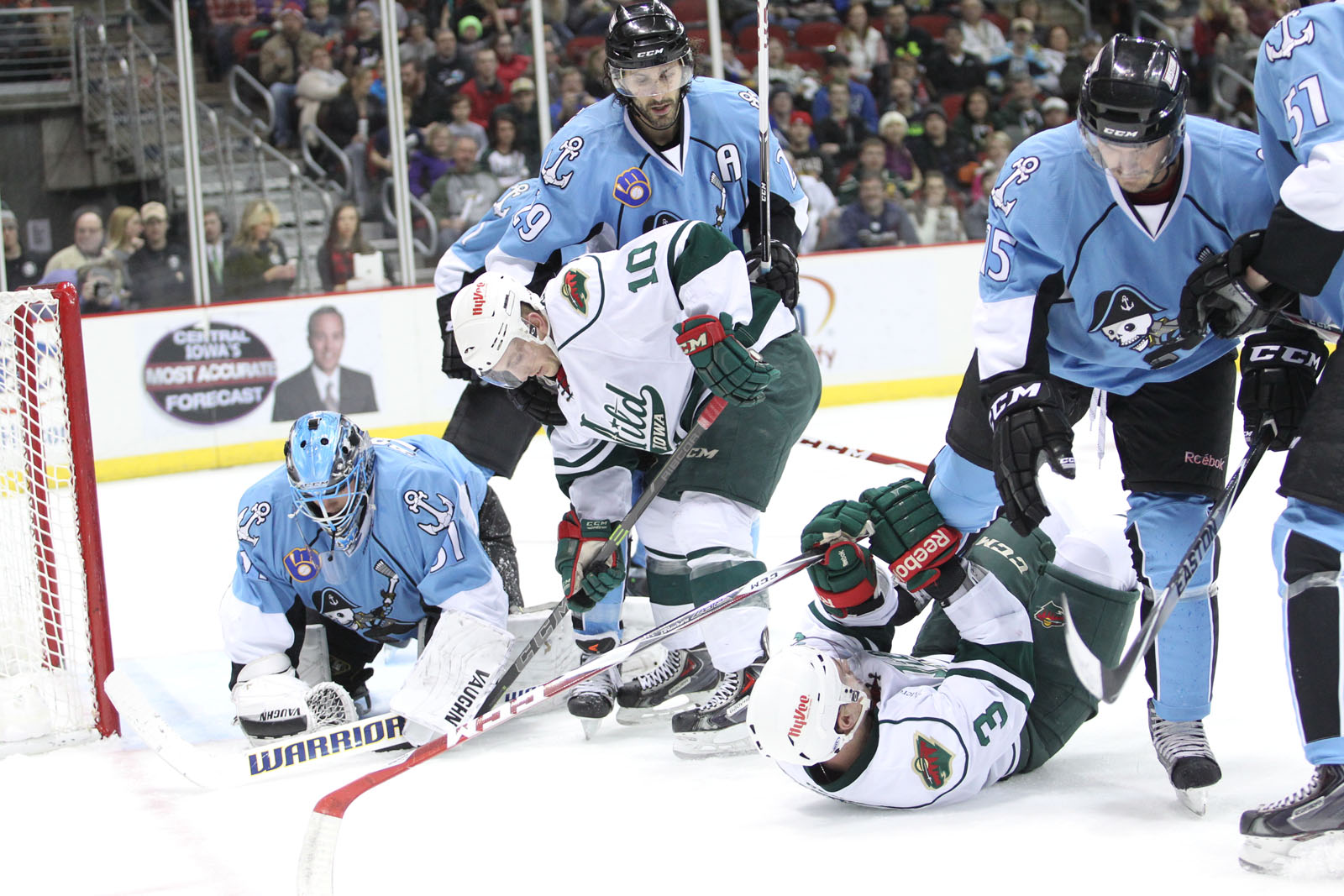 Jordan Schroeder (10) had two goals against Milwaukee on Dec. 29 including the game winner in overtime in Des Moines. (Iowa Wild Photo / Reese Strickland)

DES MOINES – Since John Torchetti took over at the helm for the Iowa Wild 12 games into this regular season, the improvement is noticeable in their record and he said he likes their performance “a lot” so far.

Before Torchetti took over, the team was 2-10. Since then they are 9-9-1-1, winning four out of 11 road games and five out of nine home games after finishing last season as the second-worst team in the league at home behind only the Portland Pirates, winning just 11 games at Wells Fargo Arena in Des Moines.

Despite the improvement, Torchetti specifically mentioned one area his team could improve upon and that is their consistency when playing on consecutive nights.

“That, to me, number one is being in shape,” Torchetti said. “That’s the focus in the physical and the mental part of the game, I feel that being in shape gets you there because our back-to-backs haven’t been very good.”

On Dec. 26, the Wild beat the Rockford Ice Hogs on the road 2-1, only to get blown out by the Grand Rapids Griffins 9-2 the next night in Grand Rapids.

In the first games of two-game back-to-back weekends since Nov. 14, the Wild are scoring 4.2 goals per game on average and allowing just 1.8 goals per contest. In the second game of those weekends, they are averaging just 2.2 goals scored while allowing a troubling 5.4.

“We’ve got to find ways to win those games and we’ve got to be mentally ready moving forward,” Torchetti said. “That’s why we put a little challenge into the guys of being ready for this back-to-back that’s coming up with Rochester and Utica so I’m looking forward to watching.”

The Wild hit the road this weekend for a pair of games out in New York beginning with Rochester on Friday and concluding in Utica on Saturday.

In the Wild’s most recent game, they took on the Milwaukee Admirals without the help of their leading goal scorer, Tyler Graovac, who was called up to Minnesota on Dec. 28 and made his NHL debut the next night against the Winnipeg Jets. It didn’t matter for Iowa as they made a comeback against the Admirals and won 2-1 in overtime behind two goals from Minnesota native Jordan Schroeder.

“The first period wasn’t great,” Schroeder said. “A lot of action in our end a lot of shots on (Johan Gustafsson) so we wanted to get pucks deep and stop turning the puck over. When we get pucks deep and use our speed and get behind their D we can create things.”

With under five minutes to go in the overtime period and a power play for Iowa, Schroeder took a pass from defenseman Danny Syvret and put it past Marek Mazanec for the winner.

A big part of the comeback attempt was physical play by the Wild in the second period, including a fight by 6-foot-4 defenseman Joel Rechlicz with Milwaukee forward Michael Liambas.

The fight was initially broken up before it happened at the faceoff and both players were penalized for unsportsmanlike conduct, but the pair fought each other right out of the penalty box two minutes later.

After the game, Torchetti praised Rechlicz’s ability to take on the “tough guy” role to get the players and fans going in the second period.

“That’s a tough role to have in hockey, I’ll tell you that,” said Torchetti. “He relishes in it.”

On Dec. 29 the Wild signed goaltender Parker Milner to a PTO to take the place of Curry with Josh Harding still recovering from a dehydration episode he suffered in a game with Iowa on Dec. 6 in Chicago.