Not So Home Sweet Home Stand

Iowa Wild hits the road after dropping three of five in Des Moines. 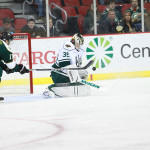 Darcy Kuemper makes a save against the Texas Stars on Nov. 1. (Photo: Reese Strickland – Iowa Wild)

The Wild (5-4-0-0) are currently in fourth place in the Midwest Division ahead of only the Chicago Wolves (4-6-0-1) and now sit in 11th place in the Western Conference.

They started off the home stand with a win over the Wolves in a high-scoring 5-4 shootout victory. Forward Carson MacMillan was sent onto the ice in a score-or-lose situation and delivered which allowed the Wild’s next shooter, Taylor Matson, to score the game winner.

Wild head coach Kurt Kleinendorst “kind of knew he would get it done” when he sent Matson out there for the game-winner in the shootout.

“You’ve got some guys that might need five or six chances, maybe seven to score a goal, he needs two or three,” Kleinendorst said. “That’s just the kind of player that he is. At that moment, no pressure, shooting to win a game, I kind of had a feeling that he would be the right guy and he showed me right.”

Johan Gustafsson started that game, but Darcy Kuemper came in for relief after Gustafsson gave up four goals in two periods on 16 shots. Kuemper stopped all 21 shots he faced in the remainder of regulation and the overtime period before stopping three of six shots in the shootout en route to the win.

Three days later the Wild fell to the defending Calder Cup Champions Grand Rapids Griffins 3-2. The Wild gave up a shorthanded goal to Landon Ferraro with less than a minute left for the loss.

The Wild were 0-for-7 on the power play in that game and Kleinendorst said that it was the difference in the game.

“It’s not just the 0-for-7, it’s everything and every way that a power play that was 0-for-7 affects your group,” Kleinendorst said. “We had an opportunity at the end and it was just probably a little bit fitting that our power play was on the ice and we gave up a shorthanded goal. That’s kind of like the exclamation point.”

The Wild began the following weekend splitting two games against the Texas Stars on Nov. 1-2, winning 4-2 on Friday and getting shut out 5-0 on Saturday.

On Saturday night, Kuemper made a season-high 44 saves but gave up five goals in the loss. Kuemper has a record of 3-3 early this season with 2.89 goals against on average and a .915 save percentage.

In Sunday night’s home-stand finale, the Milwaukee Admirals scored a trio of third-period goals, including an empty netter, to break open a tight, physical game and cruise to a 5-2 win.

After trading goals in the first period, the Wild broke the tie just 45 seconds into the second period with a goal from defenseman Steven Kampfer who took a pass from fellow defenseman Brian Connelly and skated all the way from his own zone to the attacking zone and ripped a wrist shot from the right side over the shoulder of Milwaukee goalie Marke Mazanec to take the lead.

Three minutes later things started getting physical between the two teams. Corbin Baldwin dropped the gloves with Michael Liambas. Both players were assessed an additional two-minute minor for unsportsmanlike conduct on top of the five minute majors for fighting.

Iowa defenseman Jon Landry said it was good to see some of the players stand up for themselves during the second period.

“Last night we didn’t show enough fight in the game and tonight the boys really stepped up and showed really showed some heart and right till the end we tried to pull it out,” Landry said.

The Wild return to action this Friday and Saturday night, Nov. 8-9, on the road against the Rockford Ice Hogs in Rockford, Ill.

On Oct. 31, Stephane Veilleux was reassigned to the Iowa Wild. He missed Iowa’s 4-2 win over the Texas Stars but was back in the lineup on Saturday where the Wild fell 5-0 against the Stars.

On Saturday, Nov. 2 the Wild loaned defenseman Corbin Baldwin to the Quad City Mallards of the CHL but was recalled to Iowa for their game against the Milwaukee Admirals.

On Sunday, Nov. 3 forward Carson MacMillan was recalled by the Minnesota Wild. MacMillan was tied for first on the team with six points (two goals, four assists).