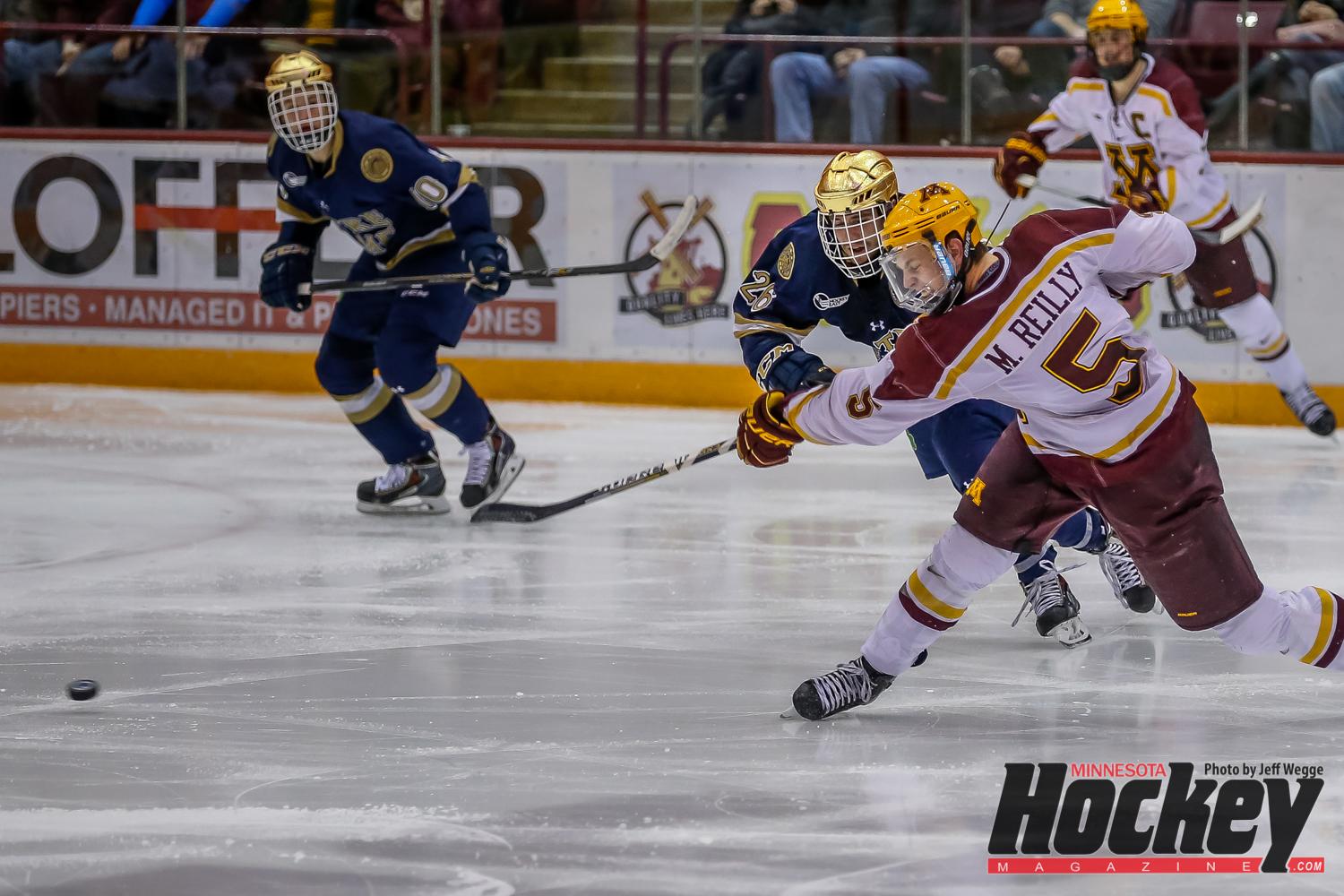 Minnesota defenseman Mike Reilly fires a shot in the third period against Notre Dame in the Gophers’ 4-2 win over the Fighting Irish on Sunday afternoon at Mariucci Arena. (MHM Photo / Jeff Wegge) Click HERE for a complete gallery of images from the game.

MINNEAPOLIS – An expected clash between Minnesota and the Notre Dame in South Bend four weeks ago in the Ice Breaker Tournament title game never materialized thanks to Rensselaer’s upset win over the Fighting Irish. It was hardly worth the wait for Notre Dame as No. 1 Minnesota rolled to 5-0 and 4-2 wins over the weekend to sweep its golden-domed foes out of Minneapolis.

Much of the credit must go to the Gophers’ defensive corps which posted four goals and five assists in the two games including three points each by junior Mike Reilly (2-1–3) and sophomore Michael Brodzinski (1-2–3). Had Jake Bischoff’s apparent goal on Friday been allowed to count it would have simply added to an already impressive weekend, especially considering he absence of junior Brady Skjei who missed both games due to a lower body injury suffered last week in a 4-3 overtime win over St. Cloud State.

Brodzinski indicated the offensive surge against No. 14 Notre Dame was by design to a degree.

“I think the big emphasis this weekend was for the defense just to join the rush and be the fourth man in—hopefully we’d get the puck—and gets some shots on net,” Brodzinski said.

Reilly, who led Minnesota defensemen with nine goals as a sophomore in 2013-14, entered the series with a team-leading eight assists but had yet to find the back of the net this year. That all changed on Friday when he one-timed a Jack Glover pass from the bottom of the right circle to give the Gophers a 3-0 lead.

“[Assistant coach Mike] Guentzel was saying the D had no goals going into this weekend besides Skjei’s empty-netter,” said Reilly whose blast on Sunday also put the Gophers up 3-0. “But we’ve been working a lot on defensemen shooting on the blue line and making sure we’re getting pucks to the net.

“It was great to get that first one and I hope it keeps going from there.”

The defensive unit’s nine points over the weekend amount to half of Minnesota’s total entering the series after combining for 17 assists, but just one goal, through the season’s first six games. While not necessarily alarming numbers, they’re not consistent with a Minnesota blue line which produced 28 goals (3rd in the nation) and 103 points (T-4th) last season.

Different team you say? That’s true as Justin Holl and Jake Parenteau have been replaced by the likes of Glover and fellow freshmen Ryan Collins and Steve Johnson. But Minnesota returned 97 percent of its backend goal production and 87 percent of its points entering the 2014-15 season so little or no drop off was expected.

Minnesota coach Don Lucia offered a fairly rudimentary explanation for the offensive outburst from his blueliners.

“We went back there more, we used them,” Lucia said. “We have guys that have the ability back there, we just weren’t using them enough and they weren’t getting enough pucks through.”

In addition to Reilly and Brodzinski, senior Ben Marshall notched his first goal of the season against Notre Dame with his tally on Friday while Glover’s dish to Reilly in the series opener earned him his first collegiate point.

“Everybody stepped up this weekend, especially the freshmen defensemen,” Brodzinski said of Glover and Collins. “They really showed us what they can do and hopefully we can bring that over to next weekend against UMD.”

The Gophers do indeed square off with the Bulldogs next weekend in a home-and-home series beginning Friday night at Mariucci Arena and concluding at Amsoil Arena in Duluth on Saturday. Both games are scheduled for 7 p.m. on FSN+.

Notes: Minnesota sophomore C Vinni Lettieri left Sunday’s game at the 11:50 mark of the second period after taking the full brunt of Notre Dame D Robbie Russo’s slap shot to his head. With the Fighting Irish on a power play, Lettieri dropped to his knees in an effort to block Russo’s blast but the rising shot went right at his head, narrowly missing his facemask as the sophomore turned away at the last moment. Lettieri had to be helped to the bench but walked to the dressing room under his own power. Information on his condition won’t be known until Tuesday at the earliest according to Lucia. … Sophomore RW Taylor Cammarata had a big day on Sunday with a trio of first-period assists to give him five helpers in the series. Cammarata’s linemates Sam Warning (2-1–3) and Justin Kloos (1-2–2) each chipped in three points on the weekend.