It didn’t come close to happening. The Wild made the NHL’s postseason tournament for the next six seasons, but only advanced to the second round twice.

Minnesota missed the playoffs in 2018-19 before making three more appearances, the final one after Parise and Suter had their contracts bought out. The general managers have changed, the coaches have changed and so have the players. The disappointment has not. Three more quick exits from the playoffs and no second-round appearance since 2015.

The Wild’s most recent postseason loss might have been the most disappointing. A franchise-record 113-point season and second-place finish in the Central Division was followed by a six-game loss to the St. Louis Blues in the opening round last spring. General manager Bill Guerin liked the team’s chances so much he acquired future Hall of Fame goalie Marc-Andre Fleury at the trade deadline.

The Wild were all in. And then they were out.

“I was not a nice person to be around for like the week,” Leipold said of his reaction to elimination. “We weren’t ready for it. I wasn’t ready for it. We had a better team than that. It didn’t happen. We didn’t win the games we needed to win. One of you guys said, everybody that didn’t have the name Kirill Kaprizov really needs to think about how they contribute in playoffs. Kirill was great. And other players, we need to step up and, you know, it’s gonna happen. The entire organization was just sick about that.” 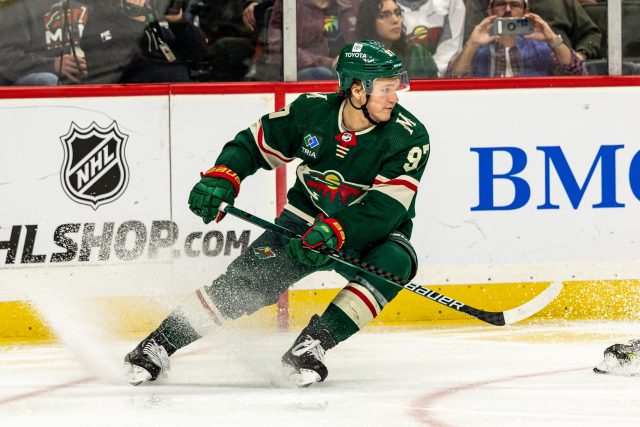 As great as Wild winger Kirill Kaprizov is, he’ll need teammates to step up in the spring for Minnesota to have any chance to avoid another Stanley Cup first-round exit. (MHM Photo / Jonathan Watkins)

The Wild will open their season on Thursday night against the New York Rangers looking to jettison the sour taste of their latest playoff ouster. They will do it without winger Kevin Fiala and his 33 goals. He was shipped to the to the Los Angeles Kings in a salary-cap related move that resulted from the $12.7 million the Wild doesn’t have because the Parise and Suter buyouts. That number will increase to $14.7 million the following two seasons, although the NHL’s cap ceiling is expected to increase. Cam Talbot, who was the Wild’s top goalie for much of last season, was traded to Ottawa after it became clear he wasn’t happy with the plan for him and Fleury.

Kaprizov and his 47 goals are back; 2020 first-round center Marco Rossi is expected to contribute; and a solid blueline returns. So what are Leipold’s expectations for his 15th season in charge of the Wild?

“Our expectation is to get out of the first round,” he said. “I think that’s a fair expectation to have. I think we have a team that can do it. You know, a lot of good things have to happen. We know that, and we have to work hard enough so those good things happen to us. … Let’s first all get out of the first round and then we’ll see what happens.”

It’s an underwhelming response for an owner who once declared it was Stanley Cup or bust for his team. But it’s also an indication of Leipold’s realization of how difficult it has been for his team — or teams if you include his time owning the Nashville Predators — to have success in the postseason.

Guerin, who won two Stanley Cups as a player and was part of two more Cup winnings teams as an executive with the Pittsburgh Penguins, has made significant changes to the Wild roster, altering the makeup of the team both on the ice and in the locker room. He also has rebuilt the team’s prospect pool, giving the franchise hope that young talent can help them through two more seasons of salary cap issues.

“This is my 24th year, 14th here, 24 years owning a franchise,” Leipold said. “I’m getting a little itchy. I know how hard it is. … I look back at teams that have done it a number of times, including Chicago and Tampa Bay and all the teams that have done it recently. You’ve got to have a lot of respect for those teams because it’s a hard thing to win. It’s a hard thing to get out of the first round. But, yeah, I’d say I’m a little itchy. I think we’ve got a really good team with an open window that is pretty long right now. And I think we’ll have a lot of fun in the next couple years and it’s my hope that we’ll win it.”

Or, at the very least, be playing far deeper into the spring.